After a day in Seattle I’m headed home and driving through downtown Renton. It’s Tuesday and I’ll be stopping by the Farmer’s Market to pick up some fresh fruit and vegetables.

Most of everything is a little early this year because of the exceptionally sunny and warm spring we had this year in the Pacific Northwest. One of the venders was saying we’re already midway through the strawberry season. Today was exceptional for berries, I bought raspberries and blueberries, and the cherries are outstanding this week. My favorite is the Rainier Cherry./p>

The Rainier (named after the mountain) are a cross between a Bing (I bought a bunch of these too!) and Van cultivars developed in the early 1950’s at Washington State University. Known for their sweetness, Rainier’s are a mix of yellow and light red in color and deliciously juicy. 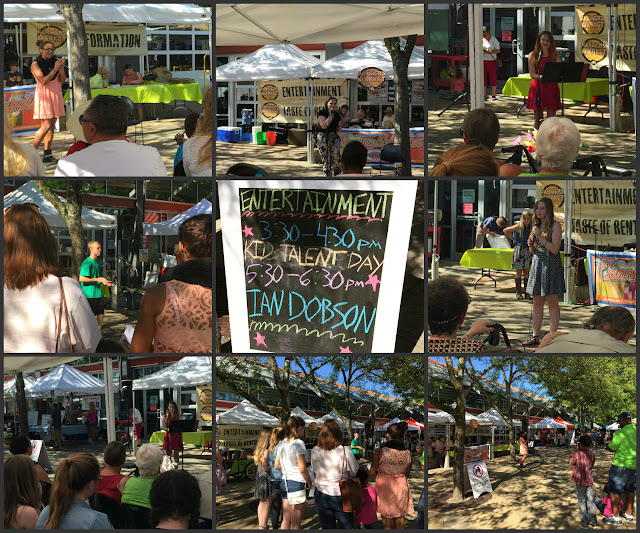 A funny coincidence over the past few days is a friend of mine is in Tokyo and I saw a post on Google+ where an online acquaintance was in London. Both were at markets and saw Rainier cherries for sale from Washington State! 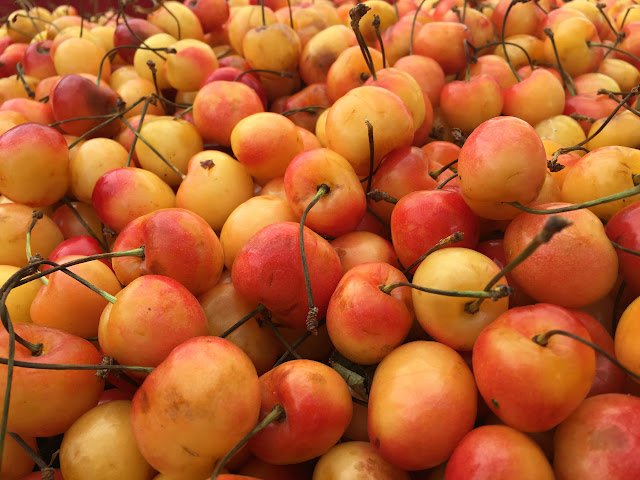 I love this season! I loaded up with some zucchini squash, green and yellow beans, carrots, a few Granny Smith apples, (love their tartness) and Snap peas. I buy at least a pound of Snap peas so I have enough to snack on until next week. And they’re all certified organic and were picked that morning.

I showed up about 3:30 pm just as the live music was starting. It was Kids Talent Day at the market and several very gifted local high schoolers took their turn to sing. It was really fun and they all did a great job. I was impressed with the variety of music performed from Broadway show tunes, an Aria, pop songs old and new, to the James Bond theme, Skyfall.

They played to a packed audience on The Piazza today and were well received by the young and old alike. There’s one thing about Renton I love and appreciate. People around here love live music of all kinds. Over the summer we’ll have all kinds of music from jazz to Asian, the Pacific Islands, Italian and some Country square dancing too!

René - when I was growing up we had 3 Rainer Cherry trees.  We always had plenty of cherry everything in June.

Hi, always enjoy viewing information on other communities...Tks for sharing

Hi Grant Schneider ... Us too! I remember we froze them, canned them, lots of pies, tarts, with icream, jam, and coffee cakes, cheese cakes, and berry crumbles! :O)

Thanks Ronald DiLalla ... my favorite posts are about communities!

Rene - The Renton Farmer's Market is a fun event to attend and enjoy healthy food.

I'm so glad it's the season for fresh healthy food John Pusa !!! Thanks!

Thanks for sharing your farmers' market experience and your photographs.

You be Roy Kelley ... What a fun afternoon!

Those cherries looked great. Sorry we don't have any in our market. I do love our loceal market with fresh fruits and veggies. I always overbuy and can let something delicious pass me by.