Mary Mallon (September 23, 1869 – November 11, 1938), better known as Typhoid Mary, was the first person in the United States identified as an asymptomatic carrier of the pathogen associated with typhoid fever. She was presumed to have infected 51 people, three of whom died, over the course of her career as a cook.  She was twice forcibly isolated by public health authorities and died after a total of nearly three decades in isolation.

fever. In 1901, she moved to Manhattan, where members of the family for whom she worked developed fevers and diarrhea, and the laundress died. Mallon then went to work for a lawyer; she left after seven of the eight people in that household became ill. 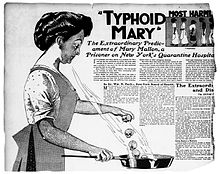 Typhoid Mary in a 1909 newspaper illustration. Note the skulls she casts into the skillet.

In 1906, she took a position in Oyster Bay, Long Island, and within two weeks 10 of the 11 family members were hospitalized with typhoid. She changed jobs again, and similar occurrences happened in three more households. She worked as a cook for the family of a wealthy New York banker, Charles Henry Warren. When the Warrens rented a house in Oyster Bay for the summer of 1906, Mallon went along too. From August 27 to September 3, six of the 11 people in the family came down with typhoid fever. The disease at that time was "unusual" in Oyster Bay, according to three medical doctors who practiced there. Mallon was subsequently hired by other families, and outbreaks followed her.

In late 1906, one family hired a typhoid researcher named George Soper to investigate. Soper published the results on June 15, 1907, in the Journal of the American Medical Association. He believed Mallon might be the source of the outbreak. He wrote:

"It was found that the family changed cooks on August 4. This was about three weeks before the typhoid epidemic broke out. She remained in the family only a short time, leaving about three weeks after the outbreak occurred. The cook was described as an Irish woman about 40 years of age, tall, heavy, single. She seemed to be in perfect health."

Soper discovered that a female Irish cook, who fit the physical description he was given, was involved in all of the outbreaks. He was unable to locate her because she generally left after an outbreak began, without giving a forwarding address. Soper learned of an active outbreak in a penthouse on Park Avenue, and discovered Mallon was the cook. Two of the household's servants were hospitalized, and the daughter of the family died of typhoid.

When Soper approached Mallon about her possible role in spreading typhoid, she adamantly rejected his request for urine and stool samples. Since Mallon refused to give samples, he decided to compile a five-year history of Mallon's employment. Soper found that of the eight families that hired Mallon as a cook, members of seven claimed to have contracted typhoid fever. On his next visit, he brought another doctor with him but again was turned away. During a later encounter when Mallon was herself hospitalized, he told her he would write a book and give her all the royalties. She angrily rejected his proposal and locked herself in the bathroom until he left.