How am I doing? It's been so long now, but it seems now, that it was only yesterday. Gee, ain't it funny, how time slips away.  I suppose there are a few that might remember my posts from years ago. Then again, they may not have been as memorable as my ego would like to believe.

Lots has happened since last we met. There was the Trulia bought AR, then Zillow bought Trulia and now Ben (not of Ben and Jerry's fame) has stepped up and bought AR,  Back in the waning days of Housevalues.com (and there delightful board), I was invited to AR. Seems that many of the Housevalues crowd made the transition. Then, the little man that owned Housevalues changed his company name to Market Leader and they forged a partnership with AR. Ben used to be part of the travelling road show sharing snippets of his "methods for success" and pimping Market Leader.

Ian Morris never realized that he had invited the fox to his hen house. You see, Ben Kinney is the first person to actually run AR that has sold more than a few homes. His is a marriage of internet savvy and real estate (boots on the ground) experience.

All the chicken littles of AR have shared their fears over the past 8 or 9 years. Who owns the blogs? Oh, my God, they have all my work and all my creative thought and We are doomed!!!!  You would think they were talking about Zillow (note: Zillow is not taking over the world yet. Now if The Donald buys them, all bets are off).

Funny, AR is still here and thriving. Agents that were able to understand the power of a long tail and local market information have seen their business increase. Yes, AR has been an asset. It really did not make a damn bit of differnece who was on the board of directors.Blog posts found their way into Google searches. Consumers use Google a tad more than they use Zillow. I would step out on a very strong limb and state that almost every consumer used Google, but everyone using Google does not use Zillow.

AR is a strong influence. Oh, I should share that I have closed many deals that began with a post on AR, Not only deals, I have relationships with agents all over the country. I have experts, in fields where I am clueless, that will answer my call and share when needed.

I have vendors, some I use and others I don't, that have become friends as well. Then there are the personal friendships that blossomed here. They are priceless.

AR has morphed and moved and put on new clothes, but at it's core it remains the same. You can sign in, read a little, comment a little or post your thoughts. I call that a core value.

So, it's nice to drop in. Here's a shout out to my friends. I am doing fine.

Remember, one fact never changes. You have all the tools necessary to be successful. You just have to accept them and use them.

Tags:
active rain how to succeed in real estate

John - Good to hear from you and that you are doing well. Like you said, although AR and blogging has changed over the years, the main meat and potatoes has remained the same.

It's really nice to have you drop by.  You somehow managed to slip in a post unnoticed.

Hi John...Like you I have slipped back in. It will stick this time. Hope it does for you too. 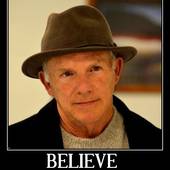 Get great free widgets at Widgetbox!