15 Proven methods to detect if someone is lying to you.

"Oh what a tangled web we weave, when first we practice to deceive."
-Sir Walter Scott 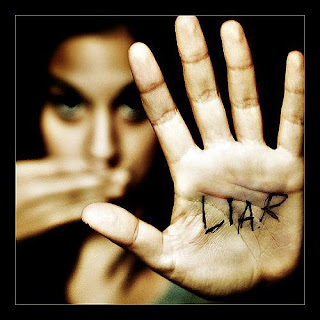 If you’re like most people, you probably tell a few white lies during the course of your day, half-truths to make others feel better, avoid conflict, or out of polite social necessity. But then there are the big lies – the manipulative or mean spirited falsehoods people spread that can really hurt others. So if someone lies as they’re trying to sell you something, lies to you at work, or the worst of all, lies to you in a relationship, how are you supposed to know what you can trust? How can you detect when someone is lying to your face?
Numerous studies, such as those conducted at Stanford University as well as training offered by the CIA, FBI, and other intelligence organizations, have revealed that definitive patterns emerge in the nonverbals, physiology, and language of someone who is lying. These cues are accurate predictors of deception and when used in combination, are almost a surefire way to tell if someone is lying to you.
1. Ask unexpected questions and watch their initial response.
It’s not the information in their answer you’re looking for as much as the way in which they answer. Carefully watch them during the first few seconds before they respond – if they pause, stall with “ums” and “ahs”, repeat the question, or lowers their voice and looks down, they are probably lying, no matter what they say next.
2. Look for insincere emotions and microexpressions.
It’s almost physical impossible for most people to fake a smile - the timing will be wrong, it will be held too long, turn into a frown at the end, their eyes will be too squinted, etc. This is just one manifestation of what are called microexpressions, which last only 1/25th of a second and reveal the person’s true emotion when they are being insincere.
3. They provide too much information.
If you ask someone a question or to explain themselves and they lie to you, they often ramble on and give far too much information. They also tend to use qualifying language like “to tell you the truth,” “in all honesty,” and “as far as I know,” that’s easy to spot.
4. Ask the person to tell their story or go over the answer in reverse chronology.
Psychologists reveal that our brains aren’t wired to retell stories or reconstruct memories in chronological order, as we often start with the most emotional parts then fill in information. But when someone is lying, they carefully arrange the story – and retell it – chronologically, so asking them to do otherwise will trip them up.
5. Measure their attitude.
People who are being dishonest often become agitated, defensive, or uncooperative when you ask to discuss something or for help filling in the details.
6. Verbal cues and speech patterns.
Certain words and phrases or speech patterns reveal deceit. If a person uses excessive religious imagery (I swear to God), overemphasize their truthfulness and honesty, repeat themselves (a way to buy time while they’re gathering their thoughts), or question or attack the question, it may be an indication they’re lying.
7. Are they minimizing?
"Minimizing language" is used to try and downplay or distract from the importance of the question or the facts, such saying “It’s not a big deal,” or referring to “the company” when they would normally say “we.”
8. Changing their head position quickly.
When you ask someone a direct question and they make a sudden head movement, they could be lying. If their head is jerked back, retracted, bows down, or tilts to the side right before they respond, it could be an inadvertent signal.
9. Their breathing shifts.
When someone tells a lie, their breathing usually changes, becoming shallow, their shoulders rising because the increased heart rate and blood flow, nerves and tension, change their normal breathing patterns.
10. They either stand very still or shift their feet.
When someone gets nervous, defensive, or feels they are backed into a corner, their flight or fight response usually kicks in. That means they’ll either hold perfectly, unnaturally still, or shift and move far too much for relaxed conversation.
11. They touch or cover their mouths.
One of the easiest ways to tell if someone is lying or at least being shifty is if they touch their mouth, their face, or put their hand over their mouth when they speak or answer a question.
12. They cover certain parts of their bodies
Likewise, if someone inadvertently covers up certain vulnerable parts of the body like their throat, chest, head, or abdomen, assuming defensive positions, they may be lying. If they bite their lips, pull on their chin, or play with their hair, it may be more signs of fibbing.
13. It becomes harder for them to speak.
When someone lies, it can actually become physiologically harder for them to speak, as the automatic nervous system decreases the flow of saliva during stress, make their mouths and lips more dry.
14. They don’t blink enough – or too much.
People blink more when they are nervous – like when they are lying - but some liars overcompensate and will hold a stare too long without blinking.
15. They point a lot.
If someone points a lot during their answers to questions or explanations, it may be an unconscious sign of the passive-aggressive nature of lying.
Like favorite_border
favorite_border 1
Re-Blog
repeat 0
bookmark_borderbookmark

I find waterboarding gets right to the truth!