A Private Walk at Point Lobos – Part One Where do I start with Point Lobos? What do I write about? You have the majestic beauty of the place, the different mammals that inhabit the land and water, the trees and plants, and the trails. There is also the history of human habitation that is an interesting story in itself. I was lucky to be given a private tour by long time docent, Bonni Weinstein and that is what will guide my article. Bonni has been a docent for over 20 years and has forgotten more than I will ever know about Point Lobos, but I will attempt to pass along some of the knowledge she has acquired. I had hiked Point Lobos once before with my sons on a cold, rainy Irish day and had a brilliant time. However, my time with Bonni taught me the benefit of walking with a docent. I will share some of the nuggets of knowledge Bonni bestowed upon me during our short time together. The name Point Lobos originates from the Spanish “Puntas de los Lobos Marinos” which means “point of the sea wolves.” The “sea wolves” the Spanish mentioned are actually sea lions that dot our coastline. They bark like dogs/wolves and don’t roar like lions as we all know and there were plenty of them to be seen and heard at Point Lobos. One of the things I first noticed while walking was that the trees all had the Spanish Moss on them that I am familiar with in the Del Monte Forest. However, it is not Spanish Moss, but a form of lichen called Lace Lichen. The lichen has a symbiotic relationship with the trees serving as a collector of water from the fog. Not only is it beautiful, but it is also beneficial for the trees of the forest. As we continued walking we came across trees that looked like they were covered with rust. This is actually a green algae that is rich in beta carotene which gives it the orange color. You will find these trees closest to the salt spray of the ocean on the north side of the trails. There comes a time when walking the trails at Point Lobos that one comes across a group of trees that look like ghosts. They all appear to be dead and evoke a terrible beauty. These are the Monterey Cypress trees and they are quite alive. As they grow the lower limbs are deprived of sunlight and die, but the tree survives and keeps growing. Point Lobos and Cypress Point in Pebble Beach are the only two areas that harbor native strands of Monterey Cypress trees and they are breathtaking to say the least. The other trees located at Point Lobos are Monterey Pines and Coastal Live Oaks. Out towards the tip Bonni showed me a spot where some manmade destruction is going on to preserve the reserve. It seems that ice plants are not native here and some brave souls rappel down the cliffs to remove the ice plants so that native plants can take their place. The ice plants are very tough and hard to remove which makes the process one of persistence and determination. A nice surprise on our walk was seeing a whale. In fact due to Bonni’s guidance I will see a whale every time I go to Point Lobos. If you know where to look, you will see the whale as well. It is hidden in plain sight. My thanks to Bonni Weinstein for the guided tour. I plan on doing it again as I know I just scratched the surface of what is to see at Point Lobos.

Patrick Ryan - Excellent information for anyone looking to take walk in Point Lobos.  What a wonderful experience to have had a such a nice private tour with long time docent Bonni Weinstein!  Beautiful photo! 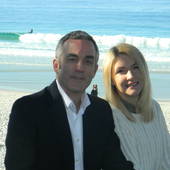