After weeks and weeks of super busy it’s Thanksgiving and I’m enjoying a few days off. I headed down to Graham to see my brother Terry and though I’ve done it several times, I just had to stop to take in this view of Mt Rainier.

The indigenous people of the Pacific Northwest called her Talol, Tacoma, and/or Tahoma, meaning the mother of waters in the Lushootseed language spoken by the Puyallup. Another meaning is Ta (larger) Koma (than Mt Baker) and other names include Tacobeh and Pooskaus.

Mount Rainier is definitely a mother to several waters including the rivers Carbon, Puyallup, Mowich, Nisqually, Cowlitz and several other tributaries... These rivers join Puget Sound to the northwest and southwest in three counties, King, Pierce, and Thurston. The Cowlitz heads south and empties into the Columbia River at Longview. 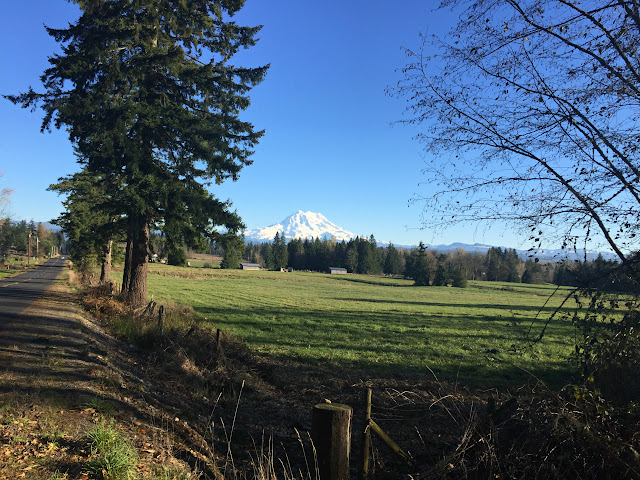 Personally I like the name Ti’Swaq pronounced “tea-swawk” (more or less in modern day tongues, with an exhalation on the final 'k' like blowing out a candle) according to Robert Satiacum Jr., of the Puyallup tribe. Ti’Swaq translates to ‘the sky wiper’. It touches the sky! There’s a movement here by local tribes to restore the mountain’s traditional names. A favorite of mine is Tahoma.

I think it’s somewhat ironic that the mountain was renamed Mount Rainier on May 8, 1792 by explorer Captain George Vancouver after his Royal Navy friend, Captain Peter Rainier, Jr. The surname Rainier has roots in Middle and Old English that mean “bringing rain” and further back in French Norman Germanic history it translates roughly to meaning advice, counsel, army. So even though it was renamed via conquest and after a man that never saw the mountain, meanings seem to persist regardless of intent.

I hope you too are enjoying some free time this long weekend to spend with family and friends and to relax a little. The next few weeks is my last big push of the year then Christmas. I’m really looking forward to it and have several days of vacation over the holidays before the brand new year, 2016!

Rene' loved the history about Mt. I had no idea. It is such a majestic Mt. reminds me of the days I lived in upper Austria by the Alps..... Endre

Such a delightful scene that is, Rene.  I've only seen Mount Rainer a few times in life.  Her majestic beauty is undenied!

I am glad that you are getting a few days off and that is such a beautiful part of the country that you get to enjoy!

I totally agree Bruce Walter ! The native names are thousands of years old and do just fine describing our region.

Hi Endre Barath, Jr. ... Thanks. I'd love to visit the Alps someday! Other than movies and via travels with Rick Steves ;O) ...

Hi Myrl Jeffcoat ... It was such a beautiful crisp cold clear day and Rainier had a lot of fresh snow recently. The photo doesn't do it justice. It was gorgeous driving around the area and watching how the shadows changed.

Hi Brian England ... Indeed it was wonderful having a few days off! This area in Pierce County is especially beautiful with many views of the mountains, rivers and lakes, and Puget Sound. Thanks!

I've always liked the name Tahoma too. If they can change McKinley to Denali - perhaps? :) As always, loved this post and your style of writing. Hope you had a wonderful Thanksgiving Day and weekend. ( Looks as if you did)

I did Debb Janes !! Hung out with my brother and got to see 3 of my 4 kids. And I also had some much needed quiet time and worked on some music!

Thanks Noah Seidenberg ... And I'm feeling refreshed this Monday!

Rene, what an interesting history of Mount gee I don't know what to call it now!  It's one of my favorite shots when I visit your part of the world.

Oh, Rene, how I treasure your travel-trove of valuable historical information so beautifully executed in your posts.

This is lovely, as I so appreciate the history of Native Americans and swallow it up with joy!

It's a good thing to take sometime off . . . . to recharge your energy.

Rene, Have you ever been up to the base of the mountain... at Paradise?  It is so beautiful and the wildflowers in the summer are amazing.

Good morning Rene. We visited the area a couple of different times, as our daughter used to live in the Seattle area. Love the view for sure.

greetings Rene, I didn't know that this existed and is a breath of fresh air.
I appreciate your open mindedness, and even a greater appreciation of your open heartedness.
I've set out to right some wrongs, and with all the push back and blow back, your comments and the comments of your followers, are a tall cool refreshing drink on a hot day.
The importance of the sky wiper, is that at one time the sky was near, bend over at the waist low, and was needed to be raised, and the holy ones grabbed the staffs and raised the sky, and after many years and tries, the sky is where the sky is today because of these holy one's. its a holy and sacred space and place the sky, where the door to the ancestors are, huh?
The mountain touches the sky, or the sky wipes itself and its self across the summit.
She came from the Sunadoh's the Olympics, she left and took the fish, elk etc with her when she left her husband, and located where she lives today along with W'east, Pahdo, Kulshan, and Sook.
The land is called by these names, because its the name the Creator gave to them, the landscape, the valleys, plains, prairies, peaks, valleys, etc, and the plants herbs and shrubs trees grasses etc, gave them names and purposes. we were instructed these are our relations and relatives, and that they will communicate and gift song, medicine, language, science math etc
those names, healings, teachings, remedies, cures, songs, words, solutions etc all come from them, and the landscape and all I mentioned, needs to hear its name.
gawd I could go on for ever and forever. There are reasons for everything and everything a reason. lots to learn, thanks with I knew of this earlier.
I'm about to submit and go public with the effort with its trajectory set on restoring the native names to all sacred places and sites, starting with the sacred mountains, then the big river, the N'Chi'Wanna, the columbia ick

Dear Robert Satiacum... I hope we meet soon. Though my Grandparents and my Great Grandparents were European immigrants, I was taught as a youth to respect, appreciate, and count my blessings that I was a son of the Pacific Northwest and lived in God's country.... And the God they were talking about wasn't the one that enabled the takeover, destruction, slavery, etc...

They wanted me to know of another one, much larger... That country, so to speak, was more mystical than I can share in a short reply. I was very blessed to have a family that respected all life and especially those among us that were here a lot longer. Like many today, we eek out our existence and learn along the way too late that we spent our lifes energy for the greedy who need to control everything.

We are the gardener's, the caretakers, we're talking about mother. So much work to do.

I'm totally with you about renaming every sacred place here in our part of the world back to the one's that were given before time. The names should never have changed. I need want desire that spiritual resonance. How can we continue, prosper, be healthy if we don't?

I love our PacNW, these rivers, mountains, the Salish Sea, and I know it even on those days I ignore it. I'm totally honored by your comments, thank you!