Support for the New Guy

Last week I wrote a blog about my experiences of driving with Uber and how it relates to what I'm doing with my Real Estate business (short version: I've driving with Uber a few hours/week for a little extra holiday cash while I'm getting my Real Estate business started. Lead generation has been an accidental, additional, benefit).  I was surprised and gratified when it was featured on ActiveRain, but I was even more surprised by the comments and support I received.  Let's face it, we could all use a pat on the back sometimes, and the support I was reading was exactly what I needed.

Among the comments were a few people who disagreed with me. I'm fine with that and I certainly don't expect the whole world to agree with me. Plus, disagreement is healthy.  Frequently, it's how I learn!

I haven't really been able to let go of some of those comments though, and I've been pondering them a bit for the past few days.  The general theme of those who disagreed with me seemed to revolve around two major points.

If both of those points are true, then that's a pretty discouraging message to anyone who's entering this industry.  Starting any new business is challenging, but being told that I have to be successful from the first day is certainly cause for anxiety!

After a few days of contemplation, though, I've decided not to be discouraged and here's why...

Perception is Everything. Maybe.

On the first point; how I'm perceived as an Uber driver.  I certainly understand this point of view.  People like to bet on a winner...so it's better to be a winner!  Of course, that's a pretty easy perspective to take if you're already a successful Realtor.  The challenge is for someone who's new.  The logic of this point falls down a bit, though, when I think about all the ways one might not be perceived as successful.

Basically anything we do to solicit business is an admission that we need more business.  Thus, an admission that we're not successful (or, at least, not as successful as we'd like to be).  So any time a Realtor advertises, prospects, cold calls, sets up social media, a website, door knocking, or participates in community events, they're soliciting business.  Will every person perceive that contact as the efforts of an unsuccessful Realtor?  No.  But some may see it that way.  Does that mean we shouldn't do those things?  Of course not.

In both cases; me meeting clients through Uber, and a successful Realtor meeting people through cold calling, the way we'll be perceived will be entirely dependent on our approach.  If we each conduct ourselves correctly the potential client will leave the conversation with a positive impression of us rather than feeling like they'd been solicited.  I choose to believe that a potential clients perception of my ability will be more influenced by HOW we interact than WHERE we interact.  Does the "where" matter? Of course.  I just don't think it matters nearly as much as the "how".  As a new agent this gives me hope because it means that, once I'm one-on-one with a client, I'm on the same footing as that 25 years agent who's doing $2bazzzillion a year.  In both cases, we win if we do it right.

First is the assumption that an experienced agent will inherently know more than an inexperienced agent.  Considering this topic reminded me of something one of my mentors talked me to about 10 years ago.  The gist of it was this; The traditional view is that smart, experienced people with the highest degree of recall are able to call on facts, figures, stories, education, and experience from memory to make them better at their job.  However, in the past 20 years the changes in technology have been moving toward changing that traditional definition.  It's no longer about who can remember the most stuff, but about who can access the most information quickly.  Our clients are more informed now than they've ever been...so it's less about impressing them with what we KNOW and more about impressing them with what we DO.

The next reason why it may be a benefit to work with an inexperienced agent is that they may not be "inexperienced" at all.  Just because I'm new to Real Estate doesn't mean I lack experience.  I'm college educated (multiple times over), I've spent 20+ years in retail and have managed $20 million dollar retail businesses, started my own company, I've moved, I've traveled, and I've been mentored by some great business minds.  In short, I've been around. I've seen things.  And all of those things lend context and experience to what I do in Real Estate.  What I bring to the table is worth something...even if it isn't all about Real Estate.

Finally, there's the "old dog and new tricks" discussion.  I don't have 25 years of Real Estate habits holding me down.  I come to this industry with an outsiders perspective, a fresh perspective.  I'm less inclined to market my listings using "the same old methods".  I'm technology driven, I'm passionate about the things I do, and I look at things differently than that experienced agent.  In many ways, my perspective more closely matches that of the millennials who are now entering the market.  I think they'll identify with me, connect with me, and find me faster than they'll find that experienced agent.

In conclusion...yes, I'm new to this.  But I don't see that as a disadvantage.  In fact, my outsiders perspective may be exactly what will make 2016 awesome for me and my clients. So I'm not scared to tell my potential clients that I'm new to Real Estate and I don't mind meeting them in unconventional ways.

We were all new once.  And when we forget what it was like to be inexperienced we need to quit.

Thanks for the support Gary!

You will find a variety of opinions in the Rain.  Don't let it get to you or take it personally.  You just need to take away the wisdom that works for you and move on.

I agree that you should let folks know that you are new to the business.  One week after getting my license in 1996, I got a new listing in a high end golf community.  The seller selected me because she thought I had more energy and enthusiasm than the seasoned agents.  Cool stuff.

Thanks Belinda!  I have my first listing going on the MLS next week.  Passion and enthusiasm go a long way!

Ross, I'm with you!  I'm "new" too (although I've been licensed since 98 and around the industry most of my life).  I'm new to full-time real estate.  I use my corporate technology background as a selling feature.  Plus I'm teamed up with my broker/father who has 30+ years experience in the field.

It's great to have some experience to lean on.  Luckily I have some awesome people who work out of my Keller Williams Brokerage who are very supportive.  I've been leaning on them heavily! 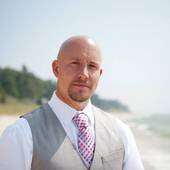