There are some other reasons you may like to reply to the comments on your posts from other ActiveRain members.

Comments can be the start of an ongoing conversation which can go off-line in either a phone conversation or a meet-up.

We had a great featured post a couple of weeks ago. When you get featured posts, you tend to get a lot more comments than on posts which are not featured.

The post I wrote led to some debate and was a bit controversial which can lead to some energetic commenting back and forth.

One of the ActiveRain members who commented a couple of times on the post was Vegas Bob.

Then he reached out to us with a phone call.

He started on ActiveRain in 2008 about a year after we joined AR.

He is currently trying to call 1 ActiveRain member each day.

Funny thing was, I have seen his comments throughout AR over the years but had no idea that idealogically we were on the same wave-length.

We also learned that Vegas Bob lives part of the year in Alaska and part in Las Vegas. He likes to travel and has been all over the western United States. And his real name is Robert Swetz. He is a REALTOR®, a glass installer ( a Master Glazier), a professional photographer and an author.

Learn more about Bob on his ActiveRain profile:

Here is a painting he created about ActiveRain: 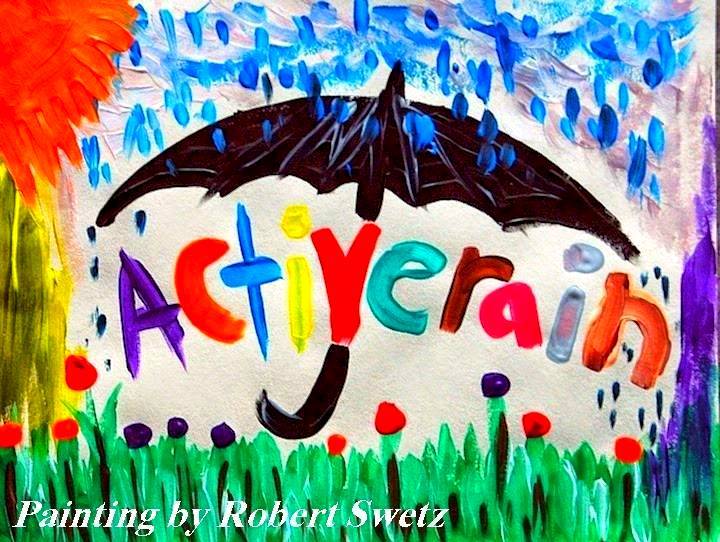 We had a great converstation about business, politics, ActiveRain, and our families.

You may want to pick up the phone and call a few of the members who are leaving comments on your blog posts.

Nestor & Katerina Gasset - I have connected with a few 'Rainers - just because of the comments........

Hi Nester and Katerina, I agree, there have been many good conversations that are started with comments.

Good morning Katerina, I love the post. I agree with you about the benefits of commenting on posts.

It was a pleasure talking with you over the phone Katerina and I think we both learned a little from our conversation. We talked for way over one hour and I shared with my brother some of our conversation related to votes in Florida you shared with me and the News Media cover-up on a specific person running for President.

Thanks for the plug and have a wonderful week

That's really cool.  I've spoken to several 'Rainers over the years but the best story is my accountability partner.

I commented on a post and asked if anyone was up for being my accountability partner.  Deb McNeil, from Ft. Worth, called me and we've been conversing every Monday morning for the past 4 years!

Yes, Nestor & Katerina Gasset One can learn a lot about other members by reading and responding to comments. I try to leave a response to all comments on my post whenever possible. It helps to build our relationships

Nestor and Katerina, seldom do I read a post or all comments that I do not gain insight into someone, some issue, or program.

My time is pressed this year, so I have not done much blogging, but I try each day to check in. This month has been difficult to find even time to check in as often.

Where is Wellibgton, Florida? My eldest daughter, husband and four grandkids recently moved to Amelia Island, FL. He is a minister.

If you don't see a neihborhood you're interested in here, or if there is no link, then it hasn't been posted yet. Just contact me and we'll fill you in on this neighborhood!