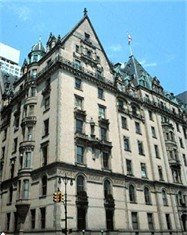 "one of the most perfect apartment houses in the world"

Today more than 100 years later, the Dakota still has fabulous apartments and magnificent views. Some of The Dakota's most famous former and current residents are Lauren Bacall, Judy Holiday, Rosemary Clooney, John Lennon and Yoko Ono, Gilda Radner and Barlis Karloff. The Dakota is filled with stories about it's famous residents. The most famous is John Lennon's murder outside the Dakota in December 1980. A section of Central Park opposite the Dakota has been named strawberry fields. At the time of the murder, many Americans were already familiar with the Dakota because of the famous film, Rosemary's Baby which had been shot there 12 years earlier.

The Dakota became a co-op in 1961. It has 10 floors and 103 apartments. The building only allows 50% financing, requires board approval and has a transfer fee paid by buyers of 2% of the sale price.

Carlie Simon was recently rejected by the board to purchase a 1 bedroom apartment. Apparently the board felt someone of her stature should be buying a larger apartment and they believed she was not buying it for her self but her son. Sean Lennon was also turned down for a purchase of an apartment and his mother Yoko is a board member. Yoko owns a couple of apartments on two floors. Her office is also in The Dakota.

Currently on the market there is one active listing in the Dakota. A 1 bedroom 1 bath with 2 fireplaces and park views. It is listed at $1,900,000 the monthly maintence is $2306. It has been on the market for 45 weeks and was originally listed at $2.150 million.

Maintence at $2300 per month for what? The address? i`m so happy I left the rat race of Manhattan in the early 80`s. I once owned a studio apt on 13st near Bway. I thought I overpaid when i purchased it for $150K...

It`s mind boggling how the NYC market truly is an island all to itself.

I know $2300 is alot. taxes are included, common charges a really old building requires expensive upkeep. But doorman and the building staff have a good union they all get paid well.

Any idea how much the Lennons paid for their apartment in April, 1973?

Hi TB, I beleive it was under $1 million.

WHERE CAN I GET A HISTORY OF PRIOR SALES PRICES AT THE DAKOTA, GOING BACK SEVERAL YEARS?

It is well well well :) above my means for now, but one day I would love to have a place in that building! It is just beautiful even though it has somewhat a creepy history with the murder and the movie :) Also, the building was declared a National Historic Landmark on December 8th 1976. Not same year but same day as my birthday! :)

Coincidentally, Lennon was murdered on Dec. 8th 1980 in front of the Dakota, hmmm! :(

How does one purchase an apartment here? Is there a management company? A waiting list to be put on to? What is the application and interview experience like? Just curious. My husband has always wanted to live in the Dakota building.

The Dakota has been a coop since 1961 the sales are resales from individual shareholders. The apartments are listed through brokers when they become available. There are curently 4 apartments for sale ranging from $7.5 milion for a 1 bedroom /3 bath to $19.5 million for a 4 bedroom/4 bath with monthly maintenance of $6000 to $8237. There is a 2% transfer fee paid by the buyer.

The minimum financing allowed is 50%. They have strict financial requirements.The building has a formula as to the financing restrictions. A high net worth is required. I can help financially qualified buyers purchase there.

I was wondering if you could tell me who currerntly owns the dakota property.  I have a friend who says he's good friends with the man who is suppossed to own the Dakota property.  All I know is supposedly this man's first name is Thomas. I would love to know. Thanks

The Dakota is a cooperative apartment building. A cooperative is a corporation. All of the individual residents of the Dakota have shares in the corporation. Seven shareholder/residents are directors of the coop board. The coop owns the property.

I was wondering about the average cost per square foot of living space for the Dakota. Any information ?

There is nothing average about the Dakota. The apartments are unique. Are you considering purchasing at the Dakota?

Please contact me direct at mhall@corcoran.com and I will provide more specific information about square footage and prices.