The Man Who Sold Hot Dogs,

The following story is a great example of the power of positive and negative attitudes:

There was a man who lived by the side of the road and sold hot dogs. He was hard of hearing so he had no radio. He had trouble with his eyes so he read no newspapers.

But he sold good hot dogs.

He put up signs telling how good they were.

He stood on the side of the road and cried: "Buy a hot dog, mister?"

He increased his meat and bun orders. He bought a bigger stove to take care of his trade. His son came to help him out.

But then something happened.

So the father cut down the meat and bun orders, took down his advertising signs, and no longer bothered to stand out on the highway to sell his hot dogs.

"You're right, son," the father said to the boy. "We certainly are in the middle of a great depression.

Groups:
Spiritual Rain
The Secret
The Secret
Law of Attraction for the REALTOR!
POSITIVE ATTITUDE for the Weary Soul

That is soooo true!  We are what we think!  I always look on the bright side, the glass is always half full.  Good post!

Like
Steve Hoffacker
Steve Hoffacker LLC - West Palm Beach, FL
Certified Aging In Place Specialist-Instructor
Edi, what a great story, and so timely. Thanks for posting, there's a lot of truth in this.
Like
David Bennett
Tarbell, Realtors - Yorba Linda, CA
Yorba Linda Real Estate
Funny story in a sad way.  Imagine if his son had told him that hot dogs were the next dot.com...

Thank you so much for your comments,

Mary, yes you are right the class is always half full, that is the only way to be

Steve, you are very welcome

David, what a great thought

Don, that is one of my favorite quotes

Like
Bob Cumiskey
A1 Connection Realty, Inc. - Sun City Center, FL
US Army Retired, Your Sun City Center, Florida ~ Realtor
Edi, How sad a story.  Yet we hear it daily on the TV...doom and gloom.  Soon people believe it and they too have doom and gloom.
Like
Tiffany Wilson
eReal Estate Corp - Redondo Beach, CA
SFR, First Time Home Buyers & Investors
Some people might say "ignorance is bliss."  That would be doing a disservice to the "ignorant".  How about "positiveness is bliss"?  Maybe it doesn't have the same ring to it, but I like the message better.
Like
Karen Gentry>>Charlottesville, Virginia Real Estate Professional
RE/MAX Excellence-Charlottesville VA - Charlottesville, VA
What a great story.  Too bad they don't tell a story like that on the six o'clock news.
Like
Andrea Green
Fortera Real Estate Services, LLC. - Clarksville, TN
CUSO Mortgage Loan Officer NMLS#823063
I LOVE this story, it fits our countries market right now sooo well!  I bet if CNN started talking about a real estate boom, we'd be swamped in no time!  Thanks !
Like
Edith " Edi " Davenport
Coldwell Banker, Conroy, Marable & Holleman - Clarksville, TN
Your Realtor For Life

Bob,   lots of people already believe the doom and gloom because of TV, very sad

Tiffany,   what a great idea, I like your message

Karen,  I agree with you, that would be a nice change

Like
Robert L. Brown
www.mrbrownsellsgr.com - Grand Rapids, MI
Grand Rapids Real Estate Bellabay Realty, West Mic
Beware of what you hear. Assess the situation for yourself. Then make your decision.
Like
Sonya Rosser
Better Homes and Gardens Real Estate Metro Brokers - Douglasville, GA
So true, one of the reasons I do not watch a whole lot of television. I try to avoid the negativity as much as possible. In our household our attitude determines our altitudes and we try not to speak anything negative. Your life will always follow the words you speak.
Like
Edith " Edi " Davenport
Coldwell Banker, Conroy, Marable & Holleman - Clarksville, TN
Your Realtor For Life

Robert,  I totaly agree, we all need to assess a situation before making decisions 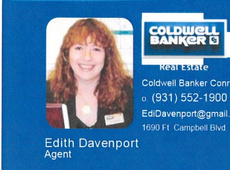