Carol Christiansen, broker/owner of Café Realty has received the “Woman of Distinction” award by Terence Murphy, NYS 40th Senate District (June 13, 2016). This award is another in a series of recognitions Carol has received for her dedication and commitment to her community.

In June 2012, Carol and her husband Lou lost their son to heroin addiction. In light of their tragedy, they co-founded Drug Crisis in Our Backyard, a community- based non-profit offering education and support for families and individuals struggling with addiction. Carol has been recognized for her efforts by the Putnam County Sheriff's Honor Corps, a Congressional Proclamation, the Sid Gibson Image Award and a Certificate of Recognition from Mental Health Services of Putnam County.

A Woman of Distinction is selfless, empathetic and consistently diligent in bringing awareness to issues in the communities where they live and serve. On June 14, Governor Andrew Cuomo and legislative leaders announced an agreement on new legislation to combat heroin and prescription opioid abuse in the state. The package of three bills address the crisis by limiting the over-prescription of opioids and get rid of barriers to access, including insurance, for inpatient treatment and medication. Carol, through Drug Crisis in Our Backyard was instrumental in this and many other initiatives to combat heroin and substance abuse through education.

serving sellers, buyers and investors throughout the greater Hudson Valley and the Bronx.

Congratulations to Carol Christiansen for this special recognition.

What a great honor and one that she should be super proud of!

What an honor for Carol!  It must have been great to share in that experience! 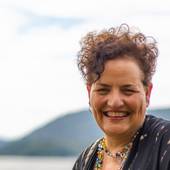