Like:
Home > Blogs > Scott Thompson > Mortgage stuff and other things too

Or in this case - Deeds Of Trust.  So, what does the name on the Deed mean?

Thomas Jefferson had a quaint idea about these things.  Something about basic property rights, guns, freedom from the tyranny of centralized guberment et cetera. All of this went out the window when Lincoln started slaughtering everybody but it was a nice idea.  Who knows, had Napoleon succeeded in his efforts to calm 'ol Abe down maybe it would be a different story.

But wait, wasn't the housing market profoundly stable for MANY decades? Bill Clinton happened.  Effectively repealing Glass-Steagal was arguably the key turning point in this story.  It was with a heavy Republican mandate by the way but that sincerely released the hounds.

Alan Greenspan happened.  Growth without inflation!  Remember that? Keep interest rates @ -0 or something to support the war!!  It is for WORLD PEACE!!

Henry Paulson happened.  Give the banks 183746543 zillion dollars otherwise they will blow up the economy!!  Which they already had!!

Despite finding a buyer for Lehman Brothers and desperately urging a switch to Covered Mortgage Bonds, as of July 2007 the Triple A ratings mortgage enjoyed was officially Past Tense.  Over.  Toast.

So just reinstate ALL of Glass-Steagal, jam Frank-Dodd into the shredder Well, it ain't that simple.  This genie is just not going back into the bottle.

Yes pension funds still need yield and yes there are many-thousands of well managed banks but without that little thing called Investor Trust, mortgage will continue to be 1 helluva' gnarly beast to tangle with.

Is the light at the end of the tunnel a speeding train?

Make it a Great Day. 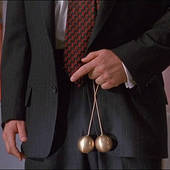