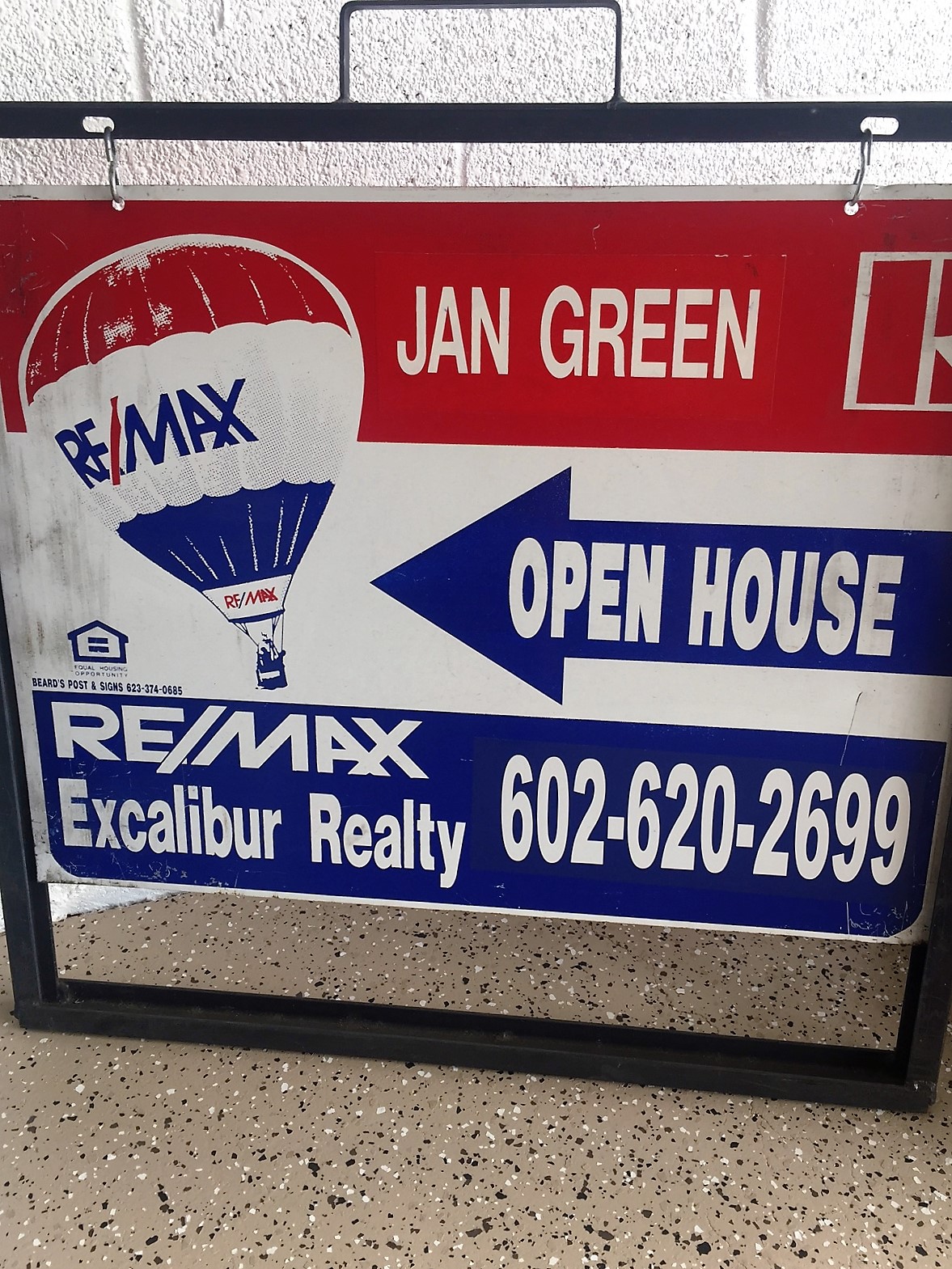 There are several memorable firsts in real estate that you'll wonder if I made this stuff up.   I still remember details vividly because I was inexperienced, but "willing to learn" as I had told seasoned agents.

My first sale started out as an open house was in McCormick Ranch in Scottsdale after being in business three weeks.  I didn't have any listings and was told that I should ask a seasoned agent if I could sit one of his open houses to pick up buyer clients.  He was a veteran with a team of agents.  He asked me if I had any signs?  I said, "No."  He said, "What kind of agent are you?"  To which I replied, "One who is willing to learn!"

Borrowing that agent's signs, I set up the open house for this beautiful home with several visitors walking through. One of the buyers had driven straight from the airport.  This was a middle aged couple looking to buy their SEVENTH  investment property, but their first in Arizona.  I greeted them and said, "Do you want me to help you save gas and time?" I had no idea about a lot of areas in the Phoenix Metro Area because I'd only just moved here  2 years before and this county is over 400 square miles!

Showing them homes the next day, I had post-it notes between pages to direct me.  The buyers saw this and asked how long I'd been in business.  I told them, "Not long but don't you worry, we'll get you a house."  I wrote a contract that night with them and sealed up the deal the next day.  But that's not as wild as my first listing.

I was in Michaels one day getting a picture framed.  I was dressed for work and had my real estate name badge on.  The store clerk remarked that she "needed an agent to help her with her mom's house"  I said I'd be happy to help her.  They weren't ready to list yet and so I told her that's okay, we'll meet and chat.  When I learned of their time frame to list the house for sale, I shared with them that I was scheduled for major leg surgery.  I told them not to worry I could still help but to expect me to be on crutches. When I showed up at their house on crutches and with a full leg brace they realized I wasn't kidding!  I could hardly bend my leg as I had an insert of cadaever bone in my thigh and all ACL removed.  I still have no idea how I drove so well and I wore that brace for 2 1/2 months ( in 2001 and 2003!)

I showed them a comparable house listed for sale around the corner, crutching my down the street to the house. Bending on one leg to access the lockbox, I must have aerated the front yard with my crutches and probably looked like I'd fall over!

We viewed the home and went back to sign the listing documents.

We sold that home in a few days for full price and with minimal repairs. They bragged to me that the big agent with the listing down the street hadn't done so well with his sellers.  They had to fix everything on their list!

I was also going through a nasty two and a half year divorce, and changed my last name back to my maiden name, Green during all of the above.  Prior to that I went to community college for two and a half years trying to figure out what I was going to do.  Using my past business skills has helped me immensely and real estate is a great fit for me.

There's one person I owe a lot to at that office but she's now retired.  The receptionist that we had was so amazing and was the voice on our recorded messages.  She started me on a great path and greeted everyone with a smile, a good lesson for a new agent.

Yes there are and I'm enjoying reading them!  Some are hilarious! Thanks for commenting Will Hamm and have a great weekend!

Hi Jan - We all get thrown into the fire when we start out - you came out not only unscathed but well on the way to success. Have a great weekend!

What a great story, and we loved your successful outcome.  Wishing you a great weekend.  A

Thank you Dick Greenberg .  I was definitely a deer looking into headlights!  I'll have to search your blogs for your story!

Thank you Ron and Alexandra Seigel !  I appreciate your comments.  Likewise, have a wonderful weekend!

Those are both very interesting and entertaining stories. Your leg in the brace story reminds me of when I had knee surgery. I was still in college, but had to drive to school...it was about 40 minutes with some traffic. It was my gas pedal leg that was in the brace. I had a manuel transmission. I managed to use my left leg for most everything...the clutch and brake. I somehow managed to use just the toes of my right foot for the gas.

Hi Jan Green - Lots to unpack in those many "firsts".  I love the McCormick Ranch Area. My husband tells me I should wear my badge when I am out and about.  Maybe I need to rethink that strategy!

Oh wow Debbie Laity !  Yes, mine was my right foot as well. Funny how you made that work!  But a manual transmission?!  LOL, reminds me of the Indiana Jones movie with "Short Round" driving that big car with a wood block on his foot!

Definitely wear your name badge  Sheri Sperry - MCNE !  It never hurts.  I got the one form Recognition Express with the sparkly jewels around it, can't miss that one!

How could you fail to be successful after such a rugged start!

Go Go Jan Green, Nice story and Great start in the business. You hit the ground running on all 4 legs!  That shows moxie!

I loved your story.  I am new and haven't sold a house yet.  I hope when I do, I will have a great story to tell one day too.  Thanks.

Thank you Marte Cliff !  It was interesting showing up on crutches with that brace, and they knew I was serious in helping them.  Have a great weekend!

Funny, all 4 legs Dana Basiliere !  You're right!  This woman had lived in her home for 40 years and it was the cutest with a white picket fence!

You will  Rhonda Savoie !  Develope peripharal vision for anything and everything to do with real estate and you'll be amazed at what happens!  Best of luck to you and welcome to ActiveRain!

You earned the business simply by showing up in a brace and on crutches. That is going above and beyond.

Jan we all have some memorable way of getting in this business but yours is what I call "hobbling" into the business:))Endre

I'm betting you'd do the same Debbie Reynolds !  I still remember the white picket fence and that sweet woman who lived in that house for 40 years!

Very funny Endre Barath, Jr.  I can tell you it was awkward, especially crutching down the street.   I couldn't put my foot down at all, non-weight bearing for 2 1/2 months, argh!  You'd do the same with your background!

Indeed Jan our word is our bond:))Endre

Drive and determination is what allowed you to get past that first time period and set the tone for your career.  very well done

What a fun read Jan Green ... You definitely are determined and looks like it has paid off!

Thank you Diana Dahlberg !  I appreciate you taking the time to read and comment!

Jan, I enjoyed reading your post and want to thank you for participating in this contest.

And the time I was on crutches was incredibly productive!  I think they all bought one of the first places I showed them because they were afraid I'd fall! My left leg was in an immobilizer!  What a pain!

Thank you for commenting  Patricia Kennedy !  This was a fun "walk" down memory lane for me.  It was a crazy time going through a divorce, starting a new career, at the same time with cadaver bone in my leg and a plate and 7 pins and I couldn't put my foot down for 2 1/2 months!  I can't imagine an immobilizer!  What painfull experiences.  Knowing you HAVE to be productive and get things done is a great motivator when you aren't 100%.  I'm sure you felt a lot of that.  Wow!