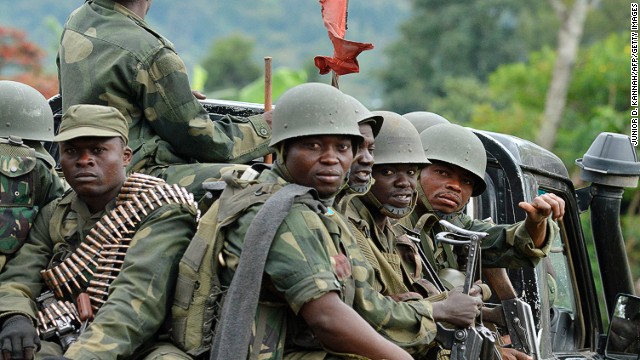 Rape Victims of the Congo

The Democratic Republic of the Congo is the most widely known country for brutal rape attacks on women, men, and even children ranging from infants to elderly. Men in the Congo militias should face legal consequences for the violation and humiliation of the innocent people in this country. This issue has been existent for decades which means nothing has been done to exterminate the cause. The reasoning behind this occurrence is the militias are striving to intimidate and exert dominance over the pedestrians. Also to show how reckless and savage they are. "Congolese doctor Alain Mukwege has witnessed horrific injuries from sexual violence while working... some 40,000 rape victims in eastern DRC have been treated since 1999" (Winsor).  The strategies used by the militias to justify their rapes include a surge for power over the rest of the country and to cause an implosion within the congolese families. “Most victims do not report the crime for fear of being outcast and stigmatized. Sadly, this also impedes efforts to collect data on sexual violence in the DRC. The victims suffer from life-long physical and psychological trauma, impairing their ability to participate in the development of their communities and making them more vulnerable” (Nanivazo). Another main objective for the militias is to create a sense of fear instilled in the Congolese communities. They want all of the DRC to know what is going on so families begin to break down from the inside creating easy access for minerals. "... Militias fight for power and control over some of the world's largest deposits of gold, copper, diamonds and tin. The perpetrators are rarely punished and the Congolese government seems to lack the political will and force to stop them" (Windsor). All of the DRC is being affected by these brutal attacks. To be more specific, both men, women and children are victimized by the brutal militias of the Congo which leads to several different outcomes. “The psychological and physical repercussions of the mass rape of women, children and sometimes even men in the DRC will undermine the capacity of the Congolese people to trust each other. It is possible that the experience of rape and violence could prevent the country from ever being capable of effectively building a nation state” (Dettke). Preventing gender discrimination in the Democratic Republic of the Congo depends upon governmental

In order to prevent the helpless Congolese people from being victimized and humiliated, several different processes need to come into play. The Congo government needs to follow the laws they have sent into motion within their government. In the DRC governmental conduct, it states that women “represent over 50% of the Country’s population. But women comprise less than 9% of the government in the Democratic Republic of the Congo” (Nato). This means the women in the Congo have no voice because they are rejected in participating with government decisions. Without a strong voice for the women in the Congo, there will be no change within the government which means suspects committing crimes will have little to no consequences. “Women’s involvement in customary systems of governance tends to be relatively limited, especially when it comes to leadership positions, even though women do act as customary chiefs in some areas. Moreover, they rarely have a decisive voice in crucial issues such as succession to chiefship although in some communities, the wife of the customary chief plays a behind-the-scenes role” (Cuvelier). Here is another quote from a Congo specialist about how women barely have any say in crucial issues dealing with the government and the people. There needs to be a drastic shift in the way their government is being controlled. More and more women have to come forward and speak up for the Congolese people as a whole. Otherwise, nothing will be done to terminate or at least lower the rape constant in the Congo. “ It is of vital importance that donor policies and programmes but also Congolese policymakers take into account the wide variety of women’s roles and positions in the Congo’s social and political landscape. In addition, more advocacy and campaigning could emphasize women’s inherent right to take part in decision-making bodies at different levels of the political system, regardless of their performance” (Cuvelier). No matter who it is, every human being has the right to speak for themselves and the greater good of their followers. Women in the Democratic Republic of the Congo must have a stronger voice to uphold their rights as human beings. Rape is not okay and the government of the DRC needs to realize the problem by coming up with specific punishments and educating the corrupt country about gender discrimination.

According to Jo Adetunji,  an author and research specialist for The Guardian website, estimates that 48 women are raped every hour in the Congo. There needs to be specific courts and punishments for those brought forth upon trial. Enforcing justice upon those committing crimes is a must in the Congo. “The Congolese government, faced with the overwhelming task of delivering justice for the many crimes committed during the war, has started to rebuild its fractured judicial system. Its' most notable success thus far was the restoration of a functioning court in Bunia, in Ituri district of Orientale province. The report discusses prosecutions that resulted in ten convictions on rape charges by this court. It examines reforms needed in laws and in the operation of the judicial system, including providing adequate protection to victims and witnesses” (Seeking Justice). Pushing these court laws upon the crooked military officers committing crimes will instill order throughout the DRC. When the individuals committing crimes understand that  justice is coming, they will absolutely stop these evil crimes. “Establish a Cabinet Committee on Sexual Violence, composed of the ministers of Women's Condition, Human Rights, Health, Defence, and Justice to draft and adopt a national plan to address the issue of sexual violence in a comprehensive manner” (Seeking Justice). Once the Congolese government enforces these topics on violence throughout the country, law and order will finally be on an uprise.

Communities all throughout the Congo have been exploited and humiliated in order to dominate the area for prized possessions. Rape in the Congo is being used frequently with the main goal of destroying communities. “Women from certain communities are targeted, just to humiliate those communities, to destroy them and to occupy their land” (Cibambo). These  communities need to come together and fight these militias. Doing so will send a message to the militias that they refuse to be victimized any longer. Educational seminars shall be set into play in order to help the Congolese people understand at a young age that rape is an unacceptable crime that no one should ever commit, under any circumstances. “Cammaert also stresses that better training of both male and female soldiers specifically on how to “deal with” sexualized violence is essential in order to increase effective prevention of wartime rape. Outreach and sensitivity are both crucial in an area where sexualized violence carries a heavy stigma—which is most of the world, if not all of it” (Bates). If the Congolese communities knew how to defend themselves, and how to work as a single unit then rape crimes would be cut in half, if not more.

The Democratic Republic of the Congo is faced with may issues that must be addressed immediately. The most important issue being rape within the communities. There are numerous accounts of victims being publicly humiliated and even killed. Radical groups continue to portray themselves as people with no conscience. The terrible thing is that only a select few are  currently facing any consequences for their actions. The militias in the Congo are not going to randomly stop committing rape crimes. The government must become a super power over these radical groups in order to put an end to these rapes. Government in the Congo must enforce its laws and allow the Women to speak for themselves on crucial issues. Women need to stand up and have a stronger voice throughout the Congo and its government. Communities need to come together and fight back. One person can make a change, but an entire community can exterminate the problem. These steps will have such grave significance that the people of the Congo will not have to live in fear. Without law and order, no nation will be anything more than corrupt and dangerous.

it is terrible.... just terrible....those kids will never be the same....such things are never forgotten and destroy lives and families....