We all know that Greece is beautiful.  Those whitewashed homes on the hills of Santorini overlooking crystal clear waters.  In fact, various hues of blue paint have been dubbed "Santorini Blue" to evoke the brilliance and the ambiance of this most beautiful of islands.

But Greece is that and SO much more.  As a crossroad of civilizations because of its strategic and often unfortunate location between Europe and Asia Minor, the country has been at war on the left, and on the right.

But one of the most important and overlooked periods of Greek history is the role Greece played during the Byzantine era.   The Byzantine Empire (also referred to as the Eastern Roman Empire) was the continuation of the Roman Empire from its fall in the 5th Century AD to its conquest by the Turks in 1453.  Greece formed the westernmost boundary of Byzantium and of course came under the Ottoman Empire until the early 20th Century.

On my recent trip to Greece we visited the center of Byzantium in Greece - an area in Thessaly (Central Greece) called Meteora - because of the incredible rock formations (Meteora) that exist there as a result of geological changes over millions of years.  The people of that place found protection from the raids of conquerors and several bold hermits and monks found shelter at these rocks, seeking mental calmness and tranquility as they sought Christian perfection.  There, they established the oldest surviving monasteries in the world and practiced Greek Orthodox Christianity continuously for over 1600 years.

These extraordinary monasteries are on top of these rocks, and continue to be the perfect place to connect with Divine. Serene, spiritual, mystical and inspirational, are just some of the words that I can use to describe them.  While 24 monasteries were originally built, only 5 survive today  - all of them still in use.

We hiked up to the oldest of the survivors - The Holy Monastery of the Great Meteora- on a particularly cloudy day. I took lots of shots while I was hiking as the rocks seemed suspended in mid-air.  And when I reached the summit and toured the monastery, I was delighted to find art restoration going on at this World Heritage Site so that these magnificent architectural wonders can remain intact for centuries to come. Thank you so much Kathy Streib - I am so delighted to be included in your  fabulous Sunday line-up!

Greece is amazing and you traveled to a very special part of Greece to experience an important part of their history..thank you for sharing with us!

Been to 30 countries (thanks US Navy) and Greece was my favorite.  The food, the people, the history. Of course it was almost 40 years ago!

I'm not sure how I missed this, but glad Kathy highlighted.  I would love to go to Greece one of these days.

BTW, it's so interesting that blue was not in their vocabulary and not included in The Iliad.

Oh, and Gayle is so right.  In fact, you could start a travel blog.

I can see why Kathy chose your blog post this week...great stuff!

Hi Joanna - thanks for taking us along on yet another wonderful adventure. Beautifully written.

Good morning Dorie Dillard , Gary L. Waters, Broker Owner, Waters Realty of Brevard, LLC , Debbie Gartner, Kristin Johnston, Waukesha County Realtor 414-254-6647 and Michael Jacobs - I chose to highlight Meteora because it is off the beaten path, to a certain extent.  Most people do not visit the mainland of Greece and  it has a very different kind of beauty from the islands.  But the financial crisis is definitely impacting the landscape.

I'm so glad Kathy highlighted this as I missed it before. I've not been to Greece yet but it's on the list.  And you post and photos make me want to go even more. The hard part would be deciding where to go!!

Greece is an amazing country. So beautiful..except Athens which is the ugliest place I've ever been. But the history is worth it all.

Hi Joanna - very interested history to learn.  Can you take me with in your suitcase?

Hi there Jeff Dowler - you will be happy when you make the decision to go, it is all worth it! Even Athens Karen Fiddler, Broker/Owner which I actually liked VERY MUCH, because of the museums and of course, the Acropolis and The Parthenon.  And yes Grant Schneider - happy to oblige if you buy me the perfect suitcase!

Hi Joanna Cohlan - Greece is such a special country. Of course my favorite areas are the islands. Greece is even more dramatic because of all the history.

I am pleased to hear from you. I went to the wrong part Crete Island. It was awful.

Good morning Joanna Cohlan, Greece is a place filled with so much history, one of my favorite places to visit. Thank you for sharing your experience.

Hi Sheri, I look forward to going back to the Greek islands-which was your favorite?

That's too bad Sam Shueh - I hear so many wonderful things about Crete and look forward to going there.

Yes, no question about it Ginny Gorman - you should definitely move it up there on your bucket list!

Good morning Beth Atalay - what was your favorite island and why? Please tell me as I value your opinion!

I love the post and the photo. I too loved my trip to Greece.i would love to go again but there are other countries that I have not yet been to.

What a wonderful trip. You dig in and see the real country and what the roots are all about.

Thanks so much Gita Bantwal and Debbie Reynolds - travel is such a privilege and so happy that you gals love to go go go! Did you visit Meteora Gita?

This is a trip I know I would enjoy. I loved learning about Greek Mythology in College. There is so much history in Greece. It is too bad there were so many wars; yet they prevailed. Then again, they continue to go through many turbulent, financial woes. I can truly understand why Jackie loved living there too. But I can also understand why she needed to come back to New York. 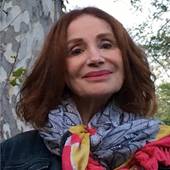