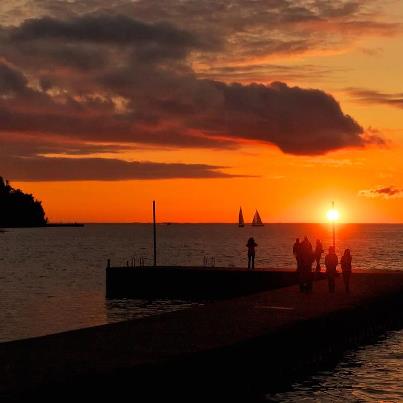 I've been representing Door County properties since 2004, and I've covered a lot of ground in that time.  I've represented Door County properties from Nasawaupee to Northport...from Gardner to Gills Rock...from Ephraim to Ellison Bay. However, over the past year I've noticed that a LOT of my posts in the past year have been about Sister Bay, Wisconsin.  I've written about where to go, what to do, what to see and especially where to buy homes in Sister Bay, Wisconsin.

Sister Bay has had a lot of changes in the past several years.  We even underwent a difficult Department of Transportation project over the course of three years when it was almost impossible to get downtown.

What a difference a few years can make.

In June of 2016, local dignitaries and community members met to celebrate the "re-opening" of downtown Sister Bay, and what a year it was! During the recession, Door County was hard-hit:  we are a tourism-based community dependent on visitors, and if people don't have extra money--they don't visit.  They don't buy second homes, either.  We had foreclosures here like everywhere else, but it's different if you're giving up your vacation home--you still have an actual roof over your head elsewhere.  In spite of all of the chaos of construction and a downturn in the economy, Sister Bay managed to hold it all together...because of a great beach, marina, shopping and fantastic restaurants (including the iconic Al Johnson's Swedish Restaurant and Butik, Husby's Food & Spirits and The Sister Bay Bowl).

Over the past three years, I've watched a dozen new businesses come into Sister Bay, and I'm very proud of the success of several of them (like a mother hen (Roots Inn & Kitchen, Blue Heron Etching, the Sister Bay Inn, Funky Cookie Studio and others), but 2016 broke all records. It's true...for 2016, Sister Bay was voted the BEST of Door County in a contest held by the Door County Visitor's Bureau....real people and real voting. The Best of Door County: While all of your photos make the area look very enticing, I particularly like the Winter Festival of Lights!

What a nice post you shared with us about Sister Bay.  Glad to hear it is thriving and that you love living and selling there.  Wishing you a great week.  A

Very nice Localism post ! Did you put it on all of your social Media sites ?