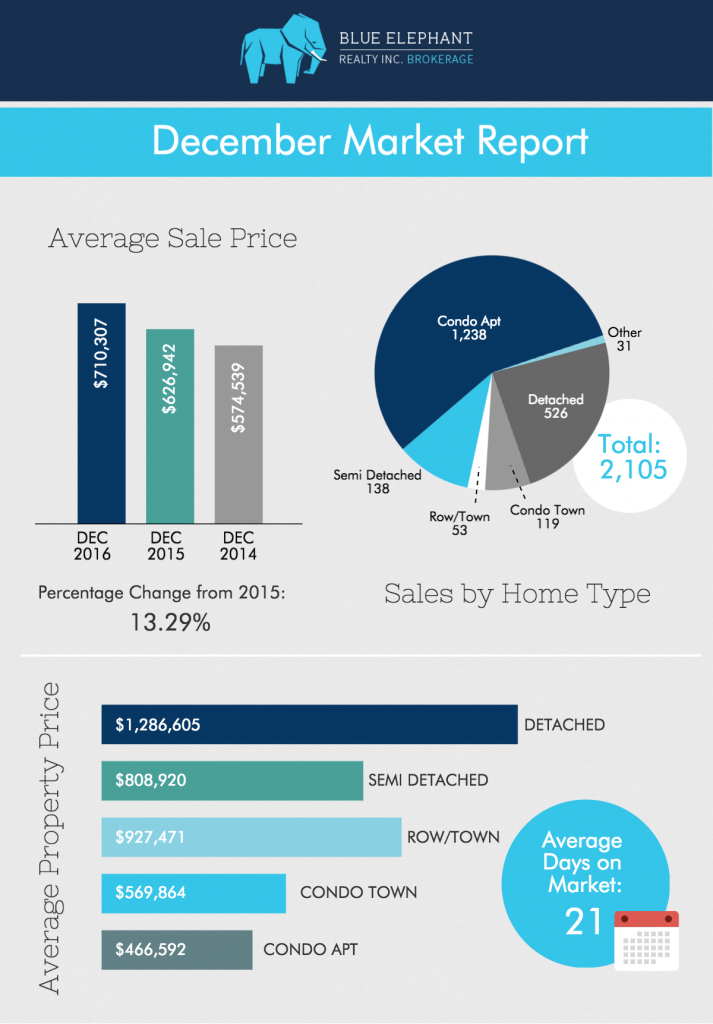 Toronto Real Estate Home Prices Report For December 2016
[All statistics via TREB Market Watch]
SMXLL
Average sales year-to-year increases
In the final month of 2016, the Toronto MLS statistics show evidence that 2016 will be the second consecutive record year through the TREB MLS system.
In December, GTA realtors reported 113,113 transactions for home sales, up from 101,213 year-over-year comparison. This is a 11.8% increase compared to December 2015. In the TREB market districts, sales were up for all major home types, with the strongest annual rate of sales growth experienced in the condominium market and detached homes throughout the calendar year. TREB recently commissioned IPSO to determine if the demand for housing was influenced by foreign or domestic in nature in the GTA. The results of the IPSO survey showed the level of foreign buying activity is low in the GTA. This explains that housing demand is mostly of domestic in nature. In the City of Toronto, the share of foreign buyers was only 5%.
Check back at the end of January 2017 for the release of 2016 Toronto Real Estate Market Review, the Outlook projection for 2017, and potential policy changes.
Overall Price Growth Across Major Home Types Up 20.3%
The continual strong Sellers market and lack of supply resulted in upward price movement. The MLS Home Price Index Composite Benchmark was up by 21% compared to December 2015. Overall average selling price was $729,922 in 2016 across all sectors compared to $622,121 from the year before.


Average GTA Selling Price  $730,472  +20%
Average 416 Selling Price $710,307  +13.3%
Average 905 Selling Price $743,601  +24%
Average GTA Condo Selling Price $440,669  +16.5%
Average 416 Condo Selling Price $466,592  +16.6%
Average 905 Condo Selling Price $375,572  +15.5%
The above chart shows average price growth in all major sectors, and average property prices for 5
different housing types.
Potential City of Toronto Land Transfer Tax Increase 2017
With housing affordability as a growing concern, City of Toronto Budget Committee is considering increasing the LTT closing cost. First time buyers can end up paying $475 more  even though the province recently doubled the LTT rebate for first time home buyers with an additional $2000 for the provincial portion.
SLXLM
Let me help you find a creative solution for your next home in this challenging real estate market. If you would like a more comprehensive real estate report based on your neighbourhood or building, please don't hesitate to get in touch to obtain a customized report through me.
Sign Up for Regular Updates, Instant New Listings Notification and Toronto Monthly Market Reports.
Like favorite_border
favorite_border 0
repeat 0
bookmark_borderbookmark