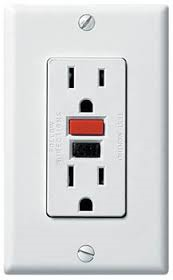 Homes built prior to 1971, homes did not have any GFCI receptacles. In 1971 they became required to be on all outlets within 15 feet of a pool. In the later 1970's they became more common place in bathrooms which controlled the outside receptacles and later even garage receptacles. Yes, that means that your one GFCI in the bathroom could control the receptacle in your garage and outside your home. This was common until the later 1990's.

In the late 1990's and early 2000's the code changed to require bathrooms to have their own circuit. This changed the way construction of homes was completed and now it is more common that garage GFCI receptacles control the garage and the exterior outlets while Kitchen and Bathroom GFCI's control only the kitchen or bathroom.

If your power is out and only receptacles are affected, try looking for a GFCI before you call your local electrician.

If you are buying a home and are curious to the requirement of that home at the time it was built here is a great list someone once gave me:

Thank you for the education and advice, especially "If your power is out and only receptacles are affected, try looking for a GFCI before you call your local electrician."