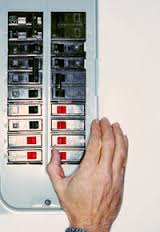 As I am recalling my days as a service electrician this week I thought I would go to my second most common service call, tripped breaker. I can't tell you how many times I went to someones home who swore they checked the breakers, only to find it was in fact tripped.

Only one of the major circuit breaker companies have included an easy way to tell if a circuit breaker is tripped, that is Square D with their QO style breakers. These breakers come with a window which shows a red "flag" if they are tripped. The balance of the breaker companies (including Square D's less expensive homeline breakers) do not include the window, thus you are often left with your best guess.

Tripped breakers should easily slide to the off position when gentle pressure is applied. To reset the circuit breaker make sure you turn it completely off and then with a "snap" return the handle to the on position which is opposite of the off position. If the circuit breaker will not reset or immediately goes back to the "tripped" position either the breaker is bad (less common) or there is a short which requires attention (more common). Normally shorts make a buzzing sound but this is not always the case.

While there are many causes for breakers to trip, before calling an electrician try resetting the breaker, sometimes that will do the trick.

Thanks for the information. This could save people a costly service call from an electrician.