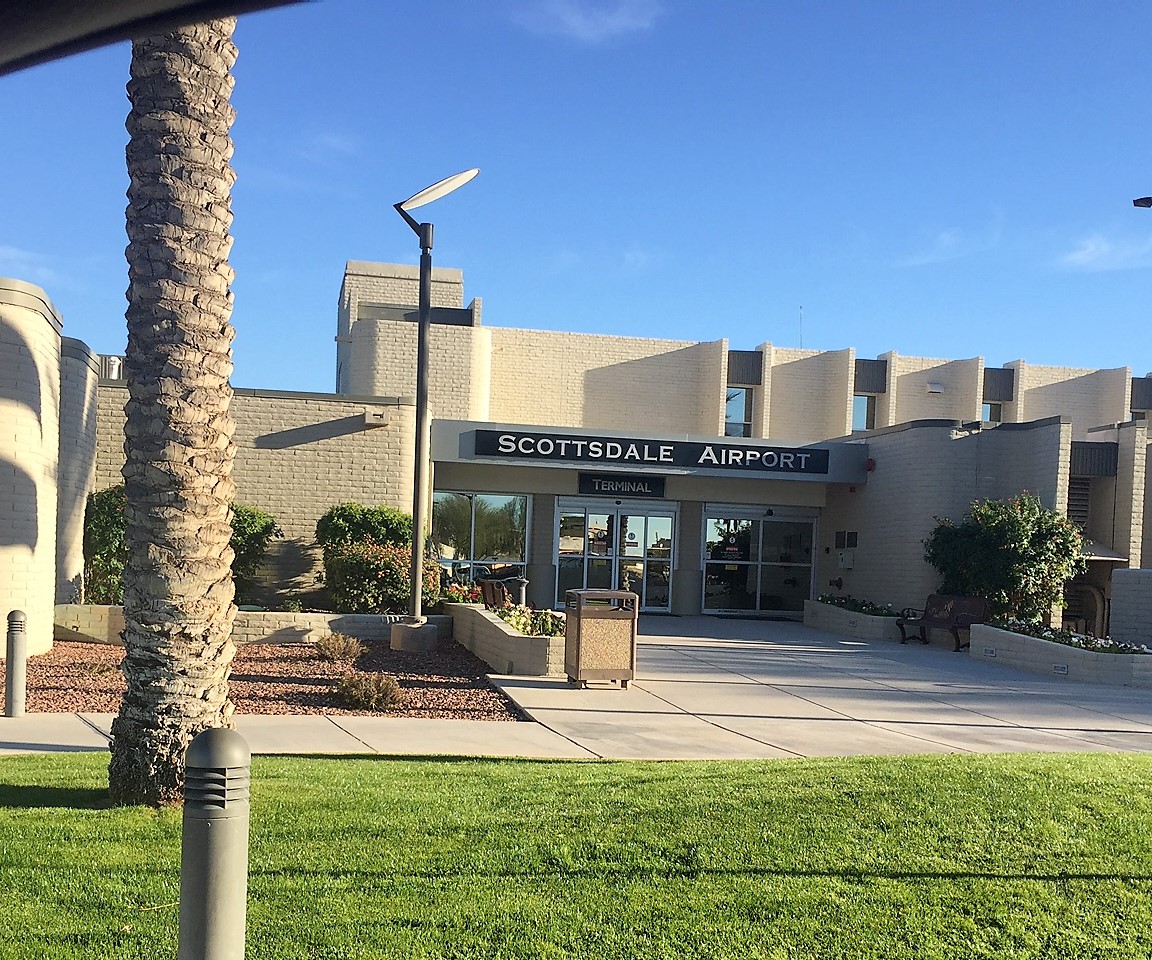 The city of Scottsdale is set to make several changes to the Scottsdale International Airport that also include entertainment.  Plans are underway to make full use of the land and space available. Traffic at this airport has increased dramatically so maximizing the area is essential for it's growth and traffic.  Yes, our grass is this green in the wintertime!

A memorial is also planned for the Thunderbird II Veterans memorial.  Donations are needed to complete the memorial that will include a pre- World War II Stearman airplane.

The Scottsdale Airport is one of the few non-domestic airports with a US Customs office.  And this airport began as a training facility for WW II pilots in 1942.

In 2004, the Scottsdale airport was the second busiest single runway airport in the country!  And now the surrounding Airpark business population has tripled in the last ten years.  Proof that this is one busy Airpark and Airport.

During the winter months, the airport is jam packed with private plans and oftentimes planes have to park in Las Vegas or other nearby airports during the busy winter months.  Visitors can attend numerous entertainment venues, Waste Management Phoenix Open, Barrett Jackson, Russo & Steele car auction, or maybe the SuperBowl!

Plans are underway to include more hangar space, expanding restaurant space,  and outdoor seating with viewing areas.  Partnering with the Gemini Group and Zulu Cafe, the changes promise to be amazing. The main terminal building and the airport business center will be demolished.  New offices will include US Customs office, Civil Air Patrol, Administration offices and other space available for lease.

Expect the grand opening in early summer, 2018 and expect construction in place for the next year.

And if you're looking to buy or sell a home in Scottsdale, give me a call!

Jan - my father was a pilot in WWII and he trained in Arizona--maybe it was there although I remember him mentioning Chandler.

We fly into Phoenix from Santa Barbara, when we come your way.  I did not realize that there is an airport in Scottdale, nor did I realize that it had customs there.  When we flew back from Costa Rica, we went through customs in Phoenix.  A

The difference between Scottsdale and Phoenix SkyHarbor airports Ron and Alexandra Seigel is that Scottsdale does not have domestic flights.  It's private planes only, so you'd never know there are any planes coming in and out of Scottsdale.  It's really neat to drove north on Scottsdale Road and see private jets flying overhead. And that airport has got to be filling up right now as the Phoenix Open starts Wednesday.  The level of excitement here escalates and traffic is everywhere!  Thanks for commenting and have a great day!

Jan Green  Thank you for that information, we appreciate it.  We should be in your neck of the woods this month, and if you are up for it, it would be fun to meet you.  A

I would love to meet you all!  Definitely give me a call.  Anna and are buddies as well, so maybe include her in the same get together for fun!

This local information is so neat to give viewers an insight on what's going on locally in a community.  Thank you for sharing!

You're right Jim Crawford  because it sets us apart as information gatherers.  The Scottsdale Airport is filling up as I write with private planes from around the country who are here for the Phoenix Open that starts tomorrow.  Luckily, the demolition won't start for a while yet.  Have yourself a great day!