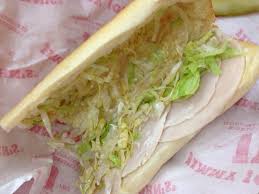 A while back I went into a restaurant and ordered a sandwich. To my dismay when the sandwich came, the  lettuce was brown and wilted. When I asked the waiter to replace the lettuce he told me that was all the lettuce they had.

It occurred to me they had several options before serving the brown wilted lettuce. They could have simply told me they were out of lettuce and offered a substitute and while I would have been disappointed, I would not have been nearly as disappointed as I was. The fact was, rather than admit they had made an ordering mistake and were not prepared for their day, they had simply tried to serve a sub-standard product and hope I would not notice. I no longer eat at that restaurant.

I've seen the same too many tmes when I order used to order @ Subway Jim. I no longer take my business there anymore.

Some companies never get it.

Jim, I would love to know how you can equate that with our business!!

Gayle, the lettuce is a metaphor for poor customer service. In my office each time we hear a bad customer service story, we call it bad lettuce. If the restaurant would have made the effort to simply say their lettuce was wilted, the experience would never had stuck in my mind, rather they simply said nothing and served an inferior product which cost them a client. In our business bad lettuce could be missing an appointment, not following up or a host of other things agents do to disappoint their clients. I hope that helps.

Hi Jim- Isn't is a shame that some businesses don't care enough about the product they build/serve/sell.

I agree Kathy, it is shocking at how many companies serve bad lettuce.

Good morning Jim. I understand and agree with your point. Hard to believe.

I've been in similar situations. One actually was lettuce. They didn't charge me for the sandwich and we have returned there since because they handled it well.

Most recently I got bad fish. Two of us at the table had the haddock and we both had to wait for our replacement meal while the others ate theirs. It was very disappointing when the restaurant didn't make any monetary compensation at all.  What was most interesting to me was that the waitress told us it was the owner doing the cooking that day. I have not and will not return to that restaurant.