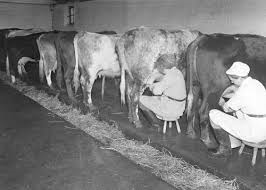 During the great depression, a young man milked cows and delivered magazines to help his family make ends meet. Each day he would get up early, milk the cows and then drive across town, delivering the milk and then picking up a load of magazines to be delivered.

Later in his life, he would attend college and began working for the JC Penny company.  Shortly thereafter he join the army, serving as a Captain in the intelligence unit during WWII. In 1945, this enterprising young man invested $5,000 of his own money and another $20,000 borrowed to buy a store of his own, a chain of a company called Ben Franklin.

In 1962, after opening 14 additional stores with the aid of his brother, the two men became increasing disappointed with the management choices of the Ben Franklin franchise, ultimately causing them to leave the franchise and move on their own.

By 1976 their new company was publicly traded, valued at over $176 Million Dollars, by 1991 the company had grown larger than Sears to become the largest US retailer.

Sam Walton is proof of the American dream. He is proof that in America anything is possible, one can go from milking cows to owning an empire.