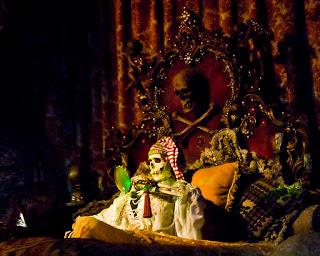 The years was 1967 and Walt Disney was working on what would be his final ride at Disneyland before his death. As the work continued throughout the ride, it soon became clear that plastics would not work for skeletal remains on the Pirates of Caribbean ride.

After several attempts witch different materials a call was finally made to the UCLA and skeletal remains were purchased and scattered throughout the ride. Since 1967 as society has become a little more sensitive to such things and plastics and other materials have improved, all but one skull have been removed from the property and replaced with props.

Actually, the skull over the bed is actually still real, so they still have real human remains!!!

Yes, today the public would find out in about 30 seconds with twitter or something!

Thanks so much for the post enjoyed it and was nice having a short warm up! Its over now lol.. Happy MLK Day!