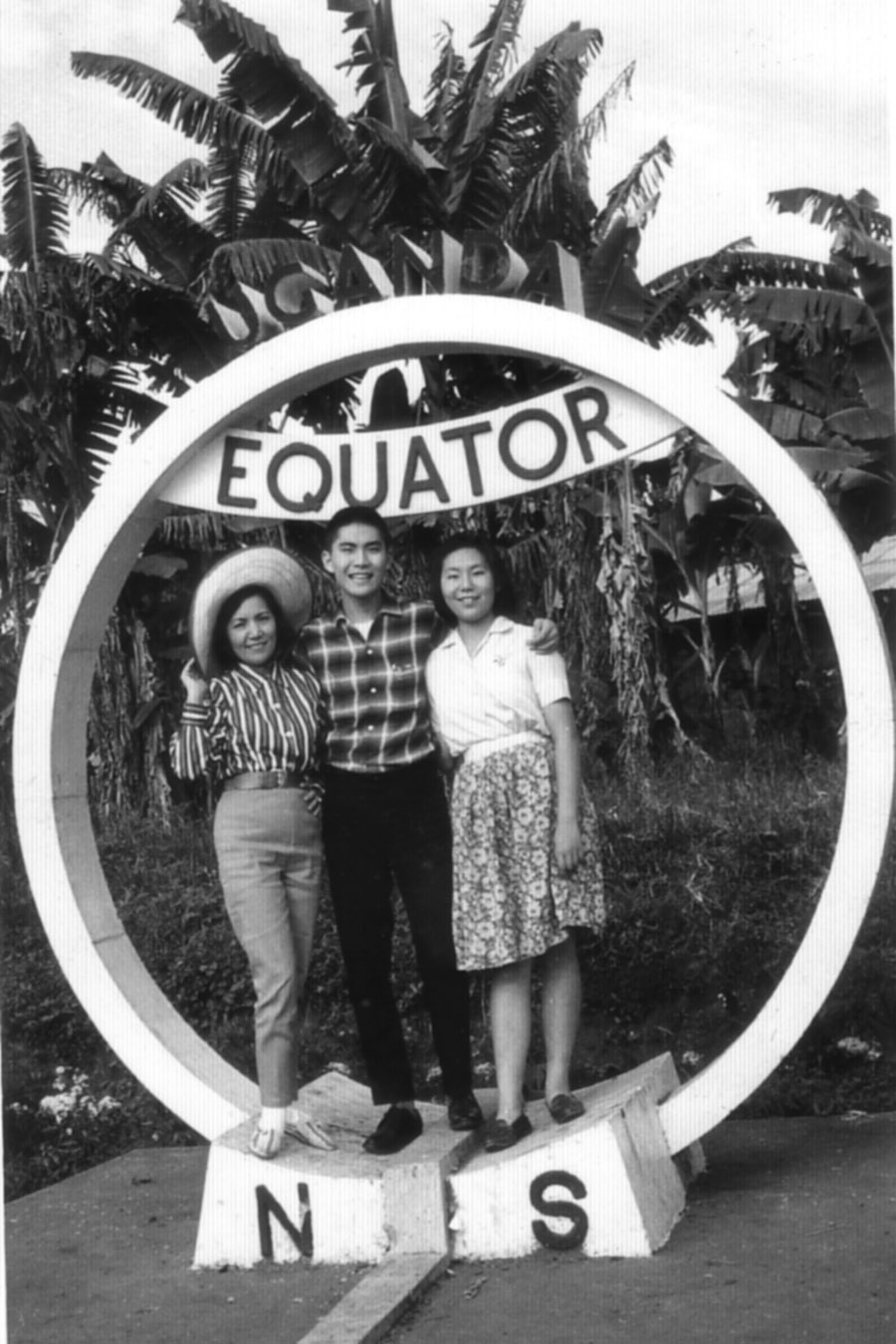 I did not realize it has been that long since we left East Africa. I lived alone in Michigan but visited my family. My adventuresome parents took an international assignment.  After Dad completed his assignment as an adviser to the South Korean government in planning some multi-purpose water resource projects, he decided to help Uganda to increase their agricultural production by diverting water into crop productions. It was sponsored by the United Nations Food Agricultural Organization with its headquarters in Rome, Italy.  The family flew from New York to Italy to get his assignments, picking up his staff and flew to Kampala, Uganda in late 1964. Assured that we were not heading for land of Mau Mau which was a few hundred kilometers away in Kenya. They arrived in west part of Uganda.

Back then East Africa just broke off from its old English colonial days. These African nations citizens had a new hope. Dad's project was supposed to teach the locals using modern technology to increase food production to get out misery encountered.  Instead of having a huge team of managers and engineers under him before, he had just one assistant engineer named Stageman. Our family stayed at local bungalow hut hostels until our bungalow homes were completed. We learned to make Chinese noodles out of Spaghetti machines bought in Italy.  Mom got her wish having more land to plant flowers and vegetable garden than she ever dreamed. She received her mail order seeds and gave away most exotic vegetables not often found in Africa.  We had two domestic helpers. Paul and ? Mr. Brown was a neighbor. He is partly Indian and may be partly English. He seemed to have sired a lot of children in the neighborhood as many also have lighter complexion surrounding his living quarter.  Our ritual was to go to Sebwe Creek watching women doing their laundry or taking ware to sell at the local market. We greeted each other Jambo (hello).   El Portal is next town and it is entrance to Queen Elizabeth National Park.  Once inside a park a tourist guide will come out utter in African French and whatever tribal dialect he spoke. My sister will pull out her French dictionary and help us understand the directions. He pointed a tree shouting: "Simba". What does Simba mean in English?  Later we figured out he was telling us to watch out for the lions.

Mother tending her garden visited by King of Toro

In the summer if 1967, his highness, the young Olimi III of Toro Kingdom paid a tour to our father’s project of 1,000-acre pilot farm. Through the Kasese Village chief tipped off there was a beautiful garden owned by a Chinese family. He and his entourage stopped at our home admired moms highly appreciated garden over 1 acre in size in the summer of 1967. My parents personally knows Olimi II, father who just passed away.

All our domestic help kneed on the ground bowing. Mom invited young King III  having afternoon tea. Mom remember there was a giant army officer guarding outside our home with a baton. Was it major Idi Ami ? That is another story.  His highness of my age was disposed same year by Obete but he returned to politics later. Toro was a kingdom way before the arrival of the British. Fort Portal is its palace. Its leader is still politically strong today in Uganda as it was always an important tribe. Everywhere we went we heard the locals chanted in English: "Russia number 1, Red China number 2 ". I suspect the later political unrest and uprisings under Milton Obete, Idi Amin etc. has to do in part from influence from these communist countries. His highness later served as ambassador to Cuba. He passed away at age of 50. He has a sister who was the first Uganda female who became a prominent lawyer in England and served on at UN delegate for Uganda.

We all enjoyed living in an exotic country, the fresh cool air. On the equator at 5049 ft elevation the average temperature is just 66 deg F(high 79 and low 54F) year around. Hippo, baboons, and exotic birds abound. Mountains of the Moon is nearby capped sometimes with snow peaks. Below slopes are blanked in moorland, bamboo forests. We have occasional European hikers stopped by.

The sad part of Dad's only engineering assistant Mr. Gill or Stageman ? resigned. Dad might have un-intentionally said something to precipitate his departure when he commented on his substandard design work. Dad worked alone completing a dam design, reservoir construction and irrigation piping and ditches for the Mubuku basin large pilot farm. FAO expected him to bring from a pilot project of 1,000 acres up to 15,000 acres as agreed by Uganda. His funds of construction were often delayed by his manager. Headquarter decided to remove the project manager due to his questionable expense reports. Dad was asked as replacement to manage water resources, agriculture and animal husbandry. He said he knew nothing about cattle and fertilizers. He chose to leave after the end of contract to head one of the largest reservoir development later. One of the spillways

That leaves children like us having to support ourselves more as the UN employee tuition assistance was over. My sister had to change from English school to Chinese school which she was not excelled at.  I had to take what I can find to do what it takes to make ends meet whether I was in Michigan, New York, Pittsburgh(PA), or Missouri.  In a way, I am glad I have developed good work ethics to be on my own even to this date. I will never stop working.

The Mubuku project actually brought prosperity and hopes. The natives migrated there to farm (Mubuku Irrigation Scheme). The dam Dad designed and built here was mentioned recently. The 1000 ac pilot farm was acknowledged. Through subsequent effort it expanded its scope until 1970. Idi Amin took over he ransacked the country.  There is also a recycling operation to extract cobalt from the old copper mines where English expats children went to the same girls school with my sister Anne in Kenya eight hours away by train.

But it recent years there is a refocus and it is known to grow rice, ground nuts, pepper, mango, oranges on the season again.

I enjoyed your tales of life in Uganda Sam Shueh. It sounded like an adventure...

I'm glad your father's devotion to this project and the people he championed hasn't been lost, that the dam is back in use for its intended purposes.

Thanks for stopping by. I am having my sister reviewing it as we intend to leave this part of "unique place to live" with our spoiled younger generations.

This adventure life with just basic modern needs are difficult for youngester to envision.  Great grandma and her baboon friends. His highness etc...

The most threatening epidemic disease there is AIDs.  Through research I learned Congo was the place(across the boarder about 30 minutes drive from our Peugeot) where HIV started.  It was local until way later. By 1980 it became a global epidemic. It was transmitted from chimp to men just like syphilis was transmitted initially from sheep to shepard.

That's quite of adventure, very interesting. I enjoyed reading your blog Sam Shueh

I am having my sister review the write up. There are additional stories that I have forgotten or not experienced.

Good morning Sam.  What an amazing experience.  Thanks for sharing it with us.

Thanks for sharing your Uganda adventure, Sam. The Mubuku project and all of the work your parents accomplished is a memory to be proud of.

When we moved to a house facing Toro (bull in Spanish) in No. CA, my mom uttered what? That mountain is named Toro?   I now realize the time spent in Toro kingdom made her such a lasting impression.  My parents even went to Ruwanda. All these land locked countries are still developing. Some are more beautiful than others.

What a wonderful adventure! I loved your description of the temperature, animals, birds, and snow peaks/moorland/bamboo forests. It sounds beautiful!

Good morning Sam. Your story is incredible. What a history you family has.

I'm so glad Carol Williams featured this post in her Saturday series as I missed it. Incredible story of you and your family with the history making a lasting impression on you. You learned how important a work ethic is which has served you well. Thank you for sharing your amazing adventure.

Thanks for featuring this almost forgotten part of my past life. Life was primitive to some extend. Everyday there was interesting experience. We had to perform first aid as medical services were not available. A few years after Idi Ami took over I started meeting more Indians getting expelled and met them in the US.

Today if you talk to those Indian owned motels owners in the US, many Patel clan tells you they were Uganda Indians. Of course, many also have a Mumbai (Bombay) root.

Sam, what a beautiful story, and thank you for sharing this, and what an experience this must have been for your whole family in Uganda.

Sam- I am so glad that Carol Williams featured this in her weekly series.  What an interesting place you lived as well as how interesting your father was.  You must have many more stories to tell!!!

Sam,  you have been *FEATURED* in today's Tuesday Travelogue, thank you!

Thank you for sharing this amazing experience. Your story and photos are so wonderful.