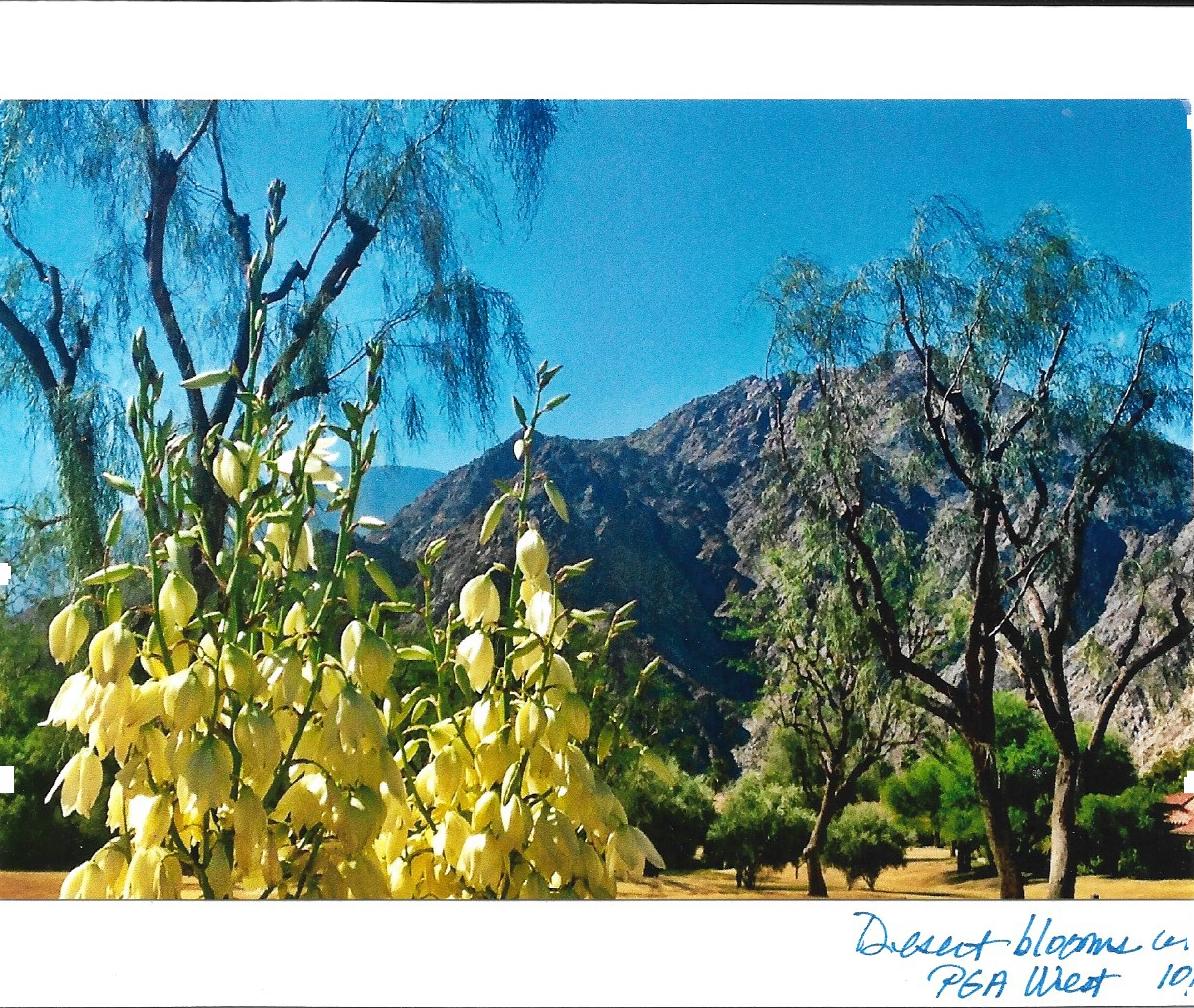 People in the entertainment business tend to move around more than most. Consequently, I have lived in several states, and more than one city in some of those states. For instance, I lived most of my life in Pittsburgh, PA, the one place that I can always come back to as "home". And I also lived briefly in Harrisburg, PA as part of an internship in the arts where I worked with the Pennsylvania Council on the Arts.

Same goes for California, where I spent several years in Los Angeles as an aspiring actress right out of college. Then I returned to the east coast to actually work in stage and film for many years (go figure). But years later I returned to the west coast and spent some of the most glorious years of my life in the desert paradise of Coachella Valley.

I found a piece of Paradise.

My favorite place to live was North La Quinta in Coachella Valley, my second "home".  These photos, sent to me a few years ago by fellow Rainer, Kathy Schowe, will help you see why. I left Pittsburgh one morning after a Superbowl Sunday blizzard, arrived later that same day in a sunny, blue skied paradise and began living some of the happiest years of my life. I left behind the New Horizon Theater, a company I actually founded and poured my soul into, to marry Vince Lee, a man who built a successful television production company operating in the Valley. I don't have a single regret about that move, because my life with Vince in La Quinta remains a high point for me and for our children. I couldn’t stop grinning for at least three years!

Why did I love it? Well, besides being head-over-heels in love with Vince, there's just something magical about the California desert. The sky is almost always a clear, “see forever” blue. That’s important to me. And while winter temperatures in Pittsburgh can dip frequently below freezing, in the desert most winter days hover somewhere between 60 and 80 degrees. No-brainer.

The valley back then was smog-free. The L. A. smog cloud literally stopped at the mouth of Windy Gap where two mountain ranges form a gate across the I-10 through which the funk could not pass. ( I hear that the smog has finally won, as more and more people discovered and moved to the Valley. Too, too bad.)

People who get to live behind gates year-round, in a place that for most folks is a vacation destination, will understand the joy I am talking about.

One feels absolutely blessed, every day!

From the moment I arrived in the Valley, I always felt like I was returning home to a paradise I’d previously known, even though I’d never lived there before. Spiritually, it was a perfect fit. The snow capped mountains looking over miles and miles of desert and tumbleweeds. Beautiful neighborhoods. Green lawns and golf courses everywhere. Rows and rows of date palms standing like sentries in the sun. Year-round hiking, biking and swimming. Desert wildflowers and cacti in bloom. The spas! The restaurants! The bougainvillea and palm trees providing color all year long. The blue jacaranda in May. The hummingbirds, and the Indian Canyons creeks and ruins. And did I mention the spas? What a wonderful life. There was only one drawback to living in the Valley. Summers. Hot, hot, HOT. I used to walk 4 - 5 miles a morning around the North La Quinta neighborhoods, but on summer mornings I'd be soaked before I even reached the gates to our subdivision. But back then, I could plow on through the heat, and the payoff was that I could jump in the pool as soon as I returned to my own yard. So, it worked out.

Would I go back? I intend to.

When I am finished growing up, I want to be a Snowbird...summers in Pittsburgh, and winters in La Quinta. I'm still working on that. And when I'm ready, Kathy Schowe will help me find the perfect condo. Wish us luck.

That area of California has a very special beauty.  I can fully understand why you like it!

Those are certainly views that I would never tire of seeing.

Good morning Elva.  I can understand why you loved living in La Quinta and plan on returning.

Thank you very much for sharing some of your fond memories.

I have seen Kathy Schowe share about her beautiful part of the world. I can see why you want to go back and hope it is sooner than later.

Elva Branson-Lee paradise it is! Wow! Such a Beautiful pictures.

And yes, second home is what we love, too, isn't it?

Thank you for sahring all of your wonderful pictures and story. This is definitely a beautiful place to loive and have fun.