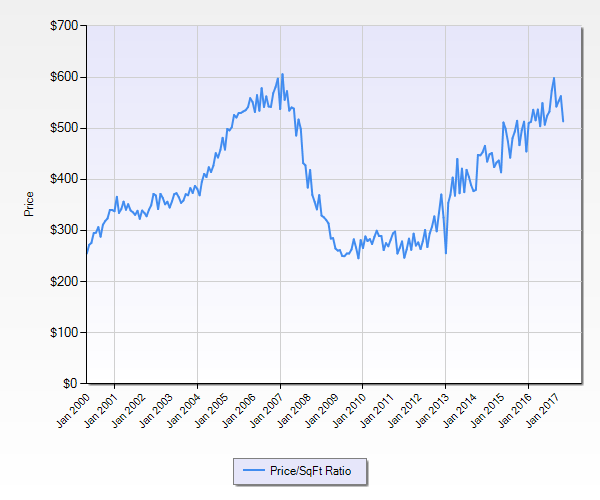 When I arrived San Jose, CA years ago, microprocessor was still at its infancy. Companies like Intel was just a start up company.  I was advised that homes at $32 a square feet was high it would never go any higher. As micro-computers were developed I saw people took circuit boards home to assemble. Conveyors converted from dry cleaner were used to transport PC towers used in the paint booth painted by human. Apple Mac sales dropped there was layoff. Seagate went offshore. There was no justification what so ever for futher home price increase in Silicon Valley. Many companies were moving out to cheaper places.

Fast forward, there are a few things I do know, however. It’s almost indisputable that, in the nation and SF Bay Area region, the housing market is experiencing one of its best periods in recent decades. After iPod, there was iPad, after that there was iPhone 3, 4, 5, 6, 7 and further models kept many workers well compensated. As Apple Space Ship campus started opening up it is impossible to be near the new campus with the traffic. All freeways are becoming parking lot to a stand still. It is not much better traffic flow than Los Angles these days to get around.  The newspaper says last week those making $100,000 a year is near poverty level here.

I was not even aware I am near in these companies: Tesla, Adobe, Electronic Arts, Twitter, Fitbit, Intuit, Solar City, Zynga, Yelp, Wells Fargo, Visa, Gap, Ross, Clorex.  Yasheng, a Chinese food distribution almost did $1b in sales in 2016 so was Align (clear teeth aligner). Needless to say we still have most social media, search engines, and many self driving car start-ups. The mail clerk told me she worked at a memory stick company years ago as a technician. Her stock was traded at $200 a share to a storage company. She had to pay so much capital gain tax. She said did OK with a smile. There are plenty of money floating around. Some blow it all; some saved well.  Remember Mark Zukerberg? He is worth $62,800,000,000.00. He was a renter not long ago.

Home prices have been in steep rise since 2011. Even during the Great Recession to acquire a distressed property presented a challenge. The fear was the home price may go even lower. Buying at the bottom is always a wishful thing.  You do not know it was at the bottom until prices have restored. My client says he was going to pay in cash. He was wealthy. But so were every one else on the shopping block.  I was instructed to write offers: As is. Cash only. 100% cash down as deposit, 24 hour closing.  The catch was lower than what sellers want. That was considered unacceptable. So added a clause: I will beat anyone over $1,000 so long as the price is under $XM. That is legal but not professional.

I read a blog from an out of the area investor looked at 500 properties made over 50 offers. A few were at asking price 100% got rejected.   Does he know what the market was like? Did he approach the top agent for an analysis what works and what does not?  He is not my client so I need not to coach. I was really suprised that many bloggers encourage him to make more offers. Did he know what the market condition stats. What are his odds? If one spend a year chasing ghosts chances are he has an unrealistic expectation thinking low ball will work.

What has worked for me is the agent you present will get serious and present your case to the judge of offer. I hire a lender he has to contact agent to present buyer's strong position. Making enough pay for a home from savings. Buyer would like like to get a small loan. Can offset offering price by putting more down if appraisal comes out short. Chances home accepted price will blow up past sales. So appraisal is not a requirement. If the sold vs asked price is 10% more, with 10 offers there are 4 ahead of him. He is just in the middle. I have seen this year a modest home in Silicon Valley got 64 offers. About 10 all cash most over the asked price. It needed cosmetic work.

The top graph is actually from one of the poorest neighborhoods in the area. Yea, home now sell at $600 a sf feet same as last peak. I had one for sale recently asked for a stellar price. It is in pending after just a couple days. A similar one was in pending after 1 day.  This is not the best place but paying at asking price is not going to cut the mustard. This year it is more competitive as more expensive neighborhood home prices are all over $M now. Not sure about others, getting $1M super jumbo loan with $0.65M down payment is not my idea of owning a modest home.

What an extreme change in the market over the years and is proof that a buyer has to have a good agent like you negotiating for their offer. If not, they have a deck stacked against them. Thanks for your entry, Sam.

The blog is unstable. Unable to upload photos. crashed again. Will work on it more when it stabilizes....

Sam Shueh - the Bay area is one of our feeder markets. A Bay area buyer for my husband's home has a 1600 sq ft home which was listed this weekend with an expected sales price of $1,900,000. My husband's spec home priced at $1,150,000 for 2800 sq ft is a steal for this buyer. This has been driving the prices in our market which is why our lower end can no longer afford to live here.

Your area would be a tough place to live - with $100k being considered poverty, what an expensive place.  It would be interesting, and I imagine far different, to be an agent in your area.  -Kasey

Good evening Sam  - there are plenty of hot markets but silcon valley tops them all.