I drove past a former residential listing I couldn't sell the other day. It has been listed with two other brokerages in the county including mine and none of us could sell it. Too bad too. Nice house, corner lot, well laid out and maintained in a good neighborhood. But the location and curb appeal wasn't the problem. It was a problem that could have been avoided but will now be nearly impossible to fix.

It was owned by cigarette smokers.

Tobacco smoking in a house is probably one of the worst impediments an owner can throw in front of a Realtor. I have seen many many buyers take one step in the doorway of a smoker's house and turn away immediately at the smell of stale tobacco smoke. It seems to permeate every absorbent material including drapes, carpet, furniture and clothes, and collect on every surface. 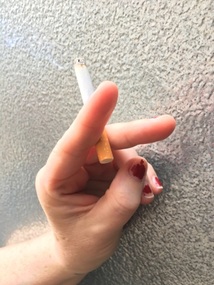 The sellers thought they had resolved the situation by spraying air freshener before showings. "We can't smell anything," they'd say. The truth is, smokers have a diminished sense of smell to begin with, and have probably grown quite used to whatever odor they could still make out. And the air freshener just makes tobacco smoke smell like floral-scented tobacco smoke. It is practically impossible to eradicate short of calling in a professional cleaning service like Serve Pro, or going through a complicated process of cleaning and sanitizing.

So how much did those cigarettes cost them per pack?

Figuring they smoked a pack, or 20 cigarettes a day between them, those smokes cost about 50 cents each at $10 a pack. At 20 a day, they smoked 7300 cigs a year. They owned the house for ten years so they lit up 73,000 cigarettes in it over the time they owned it.The conjectured loss of $100,000 in the sale of their home because of their habit would add an extra $1.37 to the cost of a each cigarette, making a pack of 20 cost $37.40. And that doesn't even begin to count up all the health risks associated with smoking.

An expensive habit, to say the least.

This is a GREAT post Vanessa Saunders and that is coming from an ex-smoker.

Kill yourself and kill your house at the same time.  The ultimate bad habit!

Back in the day, the dealership had a Prelude that had a heavy smoker. This car sat on the lot for months til one day a smoker came in saying I want that car; how much? Needless to say with a small discount he drove it for five years. The same will actually take longer with a home and they just do not care!

Vanessa, cigarette smoke is awful, and there are many buyers that will absolutely turn around and walk out without seeing a home.