Think It's To Expensive To Live At

The Beach? Check our progress. In Part One we previewed a circa 1978 singlewide

community of Leucadia, Cali. Truth be known we

purchased it with the intention of rebuilding it from

the frame up right from the start.

Remodeling it was not an option as it was far too old, full of dry rot, termites, mold, mildew and myriad structural issues which so many older trailers, mobilehomes and Manufactured homes are nowadays; especially 300 feet from the ocean.

Additionally, removing the entire home would have required that we  replace it with a much smaller Park Model RV (under 400sf) as a new HUD Manufactured Home would have had to meet all the setback requirements because the legal nonconforming structure had encroached on the existing ones.

In this phase we had to build a 12 inch wide by 12 inch deep footing and build a wood framed stem wall on top of the footing and all around the perimeter of the entire steel mainframe in order to support the new 2x6 replacement framing starting from the load bearing skirting wall and rim and floor joist system. Once the footing and the one course of block, mortar

and conctrete filled cells with anchor bolts was

Arendsen, President of ON THE LEVEL

proceeded with the construction of the Then the rim joist were attached to the It is now ready for the plastic vapor From this point on it's pretty much just another site

built construction project. the sill plate is attached to

the anchor bolts and then the 2x6 engineered load That's enough to absorb for this exciting adventure. In

PART THREE we will be slinging sticks (constructing the

wall and truss roof system) which will take a week or two as the roof trusses will have to be built on the ground and fork lifted atop the wall framing system.

That's my job Myrl Jeffcoat It really helps when I post it to Google+, FB, LI and Bigger Pockets as well.

Definitely an inexpensive way to get a home near the beach.

No doubt about it Chris Ann Cleland But they're going faster and faster as the cost to own, maintain, insure and pay taxes on a site built near the coast.

John DL Arendsen - wow! Indeed the easiest - and cheapest - way to live at the beach.

Good morning John. This seems like a real project but so worth the effort to be where it is.

We've been doing these types of projects for the past 30 years Sheila Anderson Most of the time we can just take the entire old mobilehome out and replace it with a new one or even a hybrid (part manufactured and part site built). I will definitely keep you in the loop Michael Jacobs

John DL Arendsen Quite a project you have going. The finished product should be a real winner.

You won't even think it's a MH Michael Setunsky 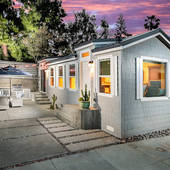