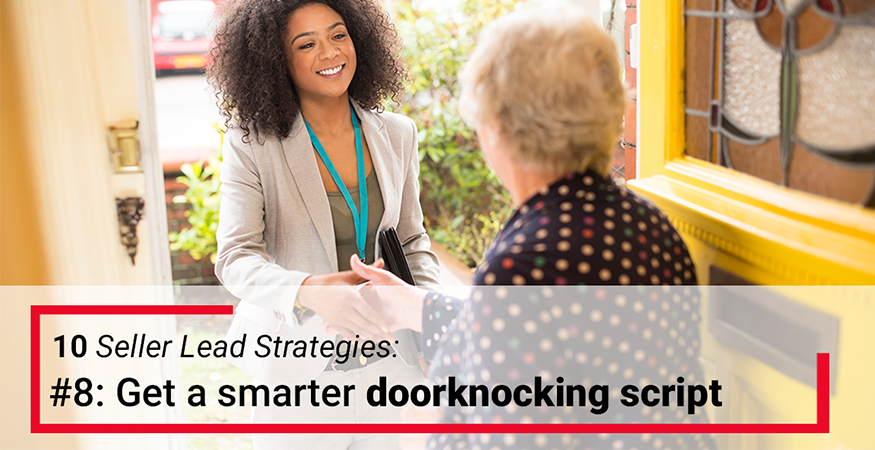 Rachel Adams, CEO of The Rachel Adams Group in Sacramento, California, has been in the business for just about five years. Within the first three years, she was one of Keller Williams’ top 1,000 agents in the country — but that’s not the most surprising thing about her. This fresh industry leader’s big, juicy listing secret…?

She loves to door knock.

Rachel believes that many agents fall flat when they go door-to-door because they don’t come with value and aren’t ready to offer real-life help to homeowners with questions and market concerns.

By coming with value, and recognizing the kind of help they need — in downsizing, upsizing or going a different route — Rachel’s team finds success when they go door knocking.

When it comes to a door knocking script, Rachel and her team keep it simple. They first create a Just Sold flyer that shows their last property that went into multiple offers. Here’s a recent example that shows the details of the five offers they received on the listing:

Next, they proceed with a very basic script that expands on the info found on the flyer:

“Hi I’m Rachel Adams with Keller Williams Realty. I just wanted to stop by to let you know that I just sold the property down the corner from you, 123 Main Street. It actually sold for $19,000 over asking and we had five offers on the property. So, that means a couple things.

"First, it means that there are four buyers who are approved in a good price point. This house sold for $500,000 — so there are four people approved for half-a-million-dollar home, who are still looking for a home.

"Secondly it means that prices are going up in your neighborhood. Because of that, a lot of your neighbors want to know what their house is worth. Do you want in on that list?”

Why this door knocking script works

As Rachel notes, her last sentence is a passive final call to action, which is in direct opposition to the hard-sell tactics you may have learned when you were first coached on door knocking.

Instead of trying to win the client right then and there, Rachel’s agents simply try to make a connection and get the homeowner to view them as an expert with information they want and don’t currently have.

The result? From that one door knocking session, which took Rachel’s team just two hours to complete, they landed one listing and three prospects who are in the “nurture” phase. Not bad for a few hours’ work!

Do you love — or loathe — door knocking?

Tell us what you love or hate about door knocking, and why you’ve found it works or doesn’t work in your area. Share your experiences in the comments.

Wish you had a coach or motivator who could get you away from your desk… and in front of more seller prospects? Learn more about Rachel’s coaching services here.

Thanks for the very good doorknocking educational report.

We're glad you found it valuable. Thanks for reading, John!

This is a useful approach to use - thank you for sharing with us. Make it a great day

I guess I've been fortunate that I've never had to door-knock, 'cause I would starve if I had to.  Put me on the "loathe" list.

I have nothing but respect, however, for those who manage to take the abuse and rejection of door-knocking and turn it into a successful career.  Kudos to you.

To each their own! We're glad you have found your own way to drum up new business and we agree -- doorknockers deserve a lot of kudos!

I think your script and idea is a good one and I like your script and approach, however...I guess I'm on the loathe list. I know you'll say its just an excuse but door knocking in my area is difficult enough, most are gated communities so its virtually impossible to get access and no street parking. The other reason is that the weather here can get quite warm 11 months out of the year so showing up at someone door dressed up and sweating to death just doesn't work. I did try once but it was brutal and no one was outside in the heat.

Sounds like you and Alan May are one and the same! We agree that not every tactic works for every agent -- and the smartest agents realize which ones they should avoid quickly! Thanks for commenting and explaining why doorknocking is always going to be a big "NO" for you. Hope the summer market is a busy one for you!

I'm a terrible lead but a great source for referrals 🤓  Around here, someone always knows someone else who is looking to buy or sell. When my neighbor's house last went up for sale, the agent got three hot leads from our block ...and within a month had her second open house on the same street!

What a great point! Sometimes the best success is "intel" from other neighbors. Thanks, April! We hope you got a nice referral gift from that agent :)

Love this! I love how you are creating the urgency and excitment by saying a lot neighbors want to know what their house is worth. Do you want in on that list?”  I have always found the fear of missing out to be a really powerful close.

Yes, it's definitely a more interesting approach than traditional "When are you selling" doorknocking scripts. We think Rachel is one smart woman for finding a modern way to get market information across to homeowners and potential sellers. Thanks for reading, Luke!

Awesome, we're so glad it helped! Thanks for reading, Wayne.

I like door knocking. Your script is dead on for communicating the urgency and to connect at their level to what is important to them. Congratulations and love to read more about your other lead techniques.

Alright, we found a doorknocker! They're hard to come by these days. We wish you continued success as you head door to door this summer. :)

I don't like it when people knock on my door trying to sell me something, so I don't do it to anyone else. Besides, as a women, I'm concerned with the safety issues. Just because a neighborhood looks nice doesn't mean there are no bad people living there. But if it's working for people, which apparently it does, and they feel safe doing it, then keep doing it. You do have a great script, though.

Everyone should keep in mind their own safety concerns and parameters, and we're glad you have determined that doorknocking is outside your comfort zone. Thanks for commenting, Sam. We hope our next tip relates better to your business model!

I will agree with Stavrula on both points. I do not like people coming to my home to sell, offer, whatever. I do not live in a drop in area, I am in a rural area. Also, the safety issue is becoming more of a deterrent. I used to doorknock with a fellow male agent in town and it was interesting but not very productive. Kudos to those who make it work.

Thanks, Kathleen, we agree that it isn't for everyone. We're glad you have found other tactics that work better for you and make you feel safer as you win new business. Thanks again for reading and commenting!

I do not door knock, because I can't stand it when someone knocks on my door with an ulterior motive. However, I will say, there is an extremely successful agent in my office who obtains most of her listings by door knocking, and I am in awe. We all need to find what works best for us and stick with it.

It's definitely not for everyone but those who do it tend over the long-term tend to do it REALLY well, don't they? We agree -- kudos to those agents! In the meantime, we'll work to find and share other tactics that resonate better with non-doorknocking agents like you.

Thanks for reading and commenting, Melissa!

I'm not a fan of door knocking.  This type of technique was discussed today during our office training.

Nothing works if you don't work it. When you're confident, you're fearless, so if you're insecure, adopt another plan to work.

We're in the meet and greet people business, determining if our solutions to a real estate issue might be of importance. There are many homeowners in a neighborhood, however, I'm only looking for the homeowner who wants to sell now or in the future.

Additionally, while I'm working (door knocking), I'm exercising, burning calories, having fun and getting an overview of the neighborhood to either confirm or reject its desirability.  Finally, if you're not having fun working, you're working harder not smarter.

Yes, confidence is key whether you're hosting an event, sitting in a listing presentation or going door-to-door! We 100% agree that if you can't find the joy in doorknocking (or any other lead gen or conversion tactic), then you should find a new way of doing things.

Thanks for your comment, Kimo! Good luck with your door-to-door lead gen this summer.

Rachel, thanks for sharing. I find that if I come from contribution and consider my stroll in the neighborhood a chance to say hello, it becomes an activity that I look forward to.

What a fantastic change in mindset. We *LOVE* this, thanks Chris! Hope you enjoy plenty of strolls this summer as you work to win more local business.

I have been door knocking for several years. I have not experienced the negative aspects that many agent claim will occur.

I do get listings and buyers from my effort. I also gain an in depth knowledge of the neighborhood as people freely tell me why they like where they are at.

Thanks for the tips, I will tweak my script using some of the suggestions.

We love that you are paying attention to more than just potential sales as you doorknock. To be the community expert, you need hundreds of anecdotes and tidbits about local events, restaurants, parks and more -- it sounds like you aren't just knocking for business, you're knocking to really get to know your neighbors and win their trust over time. Well done, John!

I can not stand even an idea of door knocking, since I never talk to those who knock my door. But saying this, I 'm going to give it a try, since right now we have such a slow season and I am willing to step over my comfort zone.

Realtor.com®- A division of Move, Inc.