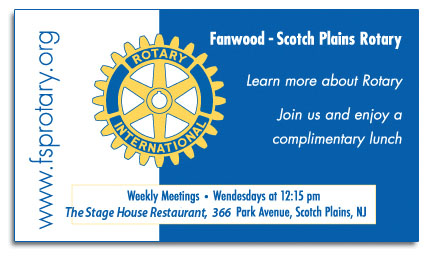 On Wednesday, June 21st, the Fanwood-Scotch Plains Rotary held their installation dinner at Shackamaxon Country Club.  The new president and board members were sworn in by Past District Governer, Mel Kevoe. There were about 40 people in attendance as outgoing President, Carmela Resnick presented awards to several Rotarians for appreciation for efforts they made in Fundraising and Service.  Later in the evening, incoming President, Steve Goldberg awarded his predecessor with a Paul Harris Fellow Pin as well as a framed Gavel for her service to the club and community, both near and far.  During Carmela's term, the FSP Rotary has grown to 71 members, making it the largest club in the district.  Throughout her year there were several very successful fundraisers and several new service projects came to fruition.  Carmela will stay on the FSP Rotary board as past President and will be chairing the Membership Committee.  She will also serve as an Assitant Governer to incoming District Governer, Bob Zeglarski, Jr. We wish them much success in making the world a better place!

For more information about the Fanwood-Scotch Plains Rotary, visit their website or contact Team Zuhl and we can give you the info you need.