"Branding"... an interesting word that has many slants and meanings to different businesses and industries. But according to www.business directory.com, it means:

The process involved in creating a unique name and image for a product in the consumers' mind, mainly through advertising campaigns with a consistent theme.

With that in mind, I usually encourage agents that I help with branding, to not only seek out a domain name, but also check to be sure it's available as a Facebook business page, Twitter, and any other social media avenues that might require a public user name, even if they are NOT using it now, get it while they can.

You see, I forgot to get the twitter name when setting up our branded name of Lifetimelender, and when I finally looked into it, it was already taken. I've pouted for years that I was too slow, and not a very good student of my own advice. So I took LifetimelenderS instead. But the other day, I decided to look into the person that beat me to the punch, and found her... in British Columbia! So I contacted her, just to see if maybe?? I believe in the sales slogan, "If you've never been told no, you've not asked enough!"

At first I sent her an email, but got no response. Hey, would you respond or figure it was just a spam email?? So, I called her. Caught her home doing her dishes (or at least that's what it sounded like) and seemed to enjoy the interruption. She told me all about her husband recently passing. A trip to Italy she is about to go on. And her problem with termites that she was battling right then. Said she could write a

book on how to deal with termites, and I truly believed she could! She told me she still did an occasional loan, but was getting ready to retire, and never used twitter - except to set up her initial profile. I told her we would be interested in buying it from her, and she seemed not to really care about that. Which was a good thing! Because, as I researched it further, I found out it's against Twitter's rules to buy and sell user names!! Who would have known???

I'm excited to report that we have an appointment set up to complete the user name transfer. But even more excited that I now have a best friend lender who lives in Canada! (She told me this was their Canada Day weekend, celebrating their 150th birthday. I asked what that meant, explaining that our celebration was gaining our Independence from England, and she said, they were celebrating the birth of their country. Whaaat? I'm not sure how a country is born, so will be doing more research on that one!)

Good afternoon Ruth. One never knows until they try .  Good to see you reached out to someone,  it all turned out good for the both of you

I agree with James Dray .  Reaching out to someone always yields benefits in our opinion. A 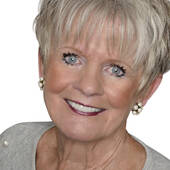