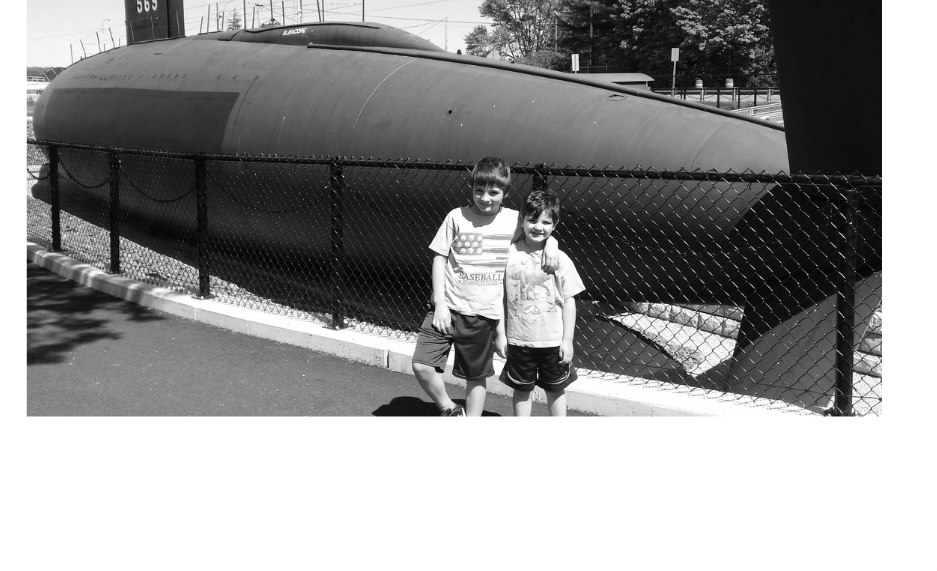 We recently took our grandsons, Jack and Thomas, to tour the USS Albacore Submarine in Portsmouth.

Built at the Portsmouth Naval Shipyard in the early 1950's, Albacore was the first Navy-designed vessel with a teardrop shaped hull built specifically to operate under water.  It was the prototype for the Navy's nuclear powered submarine force.

Albacore was placed in commission in December of 1953 and decommissioned in September of 1972. In 1984 she was towed from Philadelphia and returned to Portsmouth.

She has been at her current location, Albacore Park in Portsmouth, since 1985.

The USS Albacore, once a research submarine, now preserved as a museum, offers self-guided tours to the public.

You walk through at your own pace.

There are red buttons positioned throughout that trigger audio recordings. The recordings are very interesting, offering personalized stories from actual past crew members and information regarding different features of the sub.

Jack and Thomas LOVED their tour of the USS Albacore! It's a pretty cool experience walking through a submarine, but very hard to imagine a crew of 55 living and working inside such a confined space.

I highly recommend taking a visit to the USS Albacore.

Thumbs up from Jack and Thomas! January and February only open on weekends

Children under 7 and Active Duty Military are FREE

"In 1989, Albacore was designated a National Historic Landmark due to her contributions to submarine design.

In 2000, she was further honored with the designation of being a Historic Mechanical Engineering Landmark for her many unique systems and a Historic Welded Structure for her hull.

In May of 2005, Albacore was inducted into the Submarine Hall of Fame in Norfolk, Virginia for her contributions to submarine engineering and tactics."

Good morning Sharon. What a terrific post. I love the pictures and your descriptions.

Looks like the boys had a great time exploring all the areas of the sub!

That looks like a lot of fun to visit.  The boys look like they had a great time.  A

Sharon I can bet you there is no little boy who wouldn't LOVE a tour on a submarine - big boys for that matter too!!

I toured the German U-boat in Chicago and was amazed at how samll the insides were. The pressure of deep dives requires an outer hull that compresses.

Wayne Martin  it's different, not something most people have the chance to do.

Harry F. D'Elia  I would like to take the other grands there sometime. I know Jack and Tom would love to go back again.

Sheila Anderson  Thank you!  It was a fun visit and I know others would enjoy it.

Belinda Spillman  They couldn't believe how many bunks there were and how SMALL they were.

Ron and Alexandra Seigel  It was fun. Very hands on. You can touch most everything which is something kids love to do!

Anna Banana Kruchten, CRS  One thing I forgot to mention is that my son (daddy to Jack and Tom) works at the shipyard. He actually does electrical work on submarines. It was even more interesting for the boys because of that.

Joe Pryor  I would find it extremely difficult to live in such a tight space, and that is above water....no way I would want to be underwater in that thing!

Sharon, this would be SOOO much fun, and you guys sure looks like it was a blast.  It is so reasonably priced too.

Hi Sharon - Jack and Thomas really look like they were all in.  I think it is a great place to visit.

Sharon- I bet Jack and Thomas will remember this trip for a longgggg time!!!  They look like they fit right in!  And did you tour it?

Joan Cox  Very reasonable....actually only cost us $14 for "family" rate so both boys were free!

Grant Schneider  Fun and educational! They actually went through twice. They didn't want to leave.

Kathy Streib  I was right there with them. I took all the pics. I've been through many times. We took my parents a couple of years ago and they really liked it too.

What a fun adventure, Sharon. They will remember the ship and those memories will stick forever.

Debbie Reynolds  Especially since their dad works on submarines and they had no idea what a submarine was like inside. Now they know!

Hi Sharon -- one thumb up would be sufficient but two thumbs up tells me a tour of USS Albacore is a must see/must stop destination in Portsmouth NH.

Michael Jacobs  It could be uncomfortable for a very tall person or someone suffering from claustrophobia, but other than that....awesome!

It is scary, for me, to realize that that submarine was still in service and tied up next to us once or twice while I was still on active duty. I am so old Sharon Tara

Paul S. Henderson, CRS, REALTOR®,  I went to my 41st high school reunion on Saturday. I feel old too.

I remember touring submarines as a child and realized that I could never have a job like that but, totally appreciate those who serve in that capacity, Sharon! It's always a great thing to share with your children!

Debe Maxwell, CRS  Especially meaningful to these two guys because their daddy works on submarines as an electrician.