Tonight, Port Royal Town Council, the Port developers, and some concerned citizens meet to discuss the fate of the Dry Stack Marina located at the south end of London Avenue in the Old Village of Port Royal. Many are in favor and many are opposed to allowing the developers to save and reopen the facility. Both sides have valid points of view to be debated and considered.

I, Carl Joye, a lifetime resident of Port Royal Island in Northern Beaufort County, have an opinion that is no more or no less important than any opinion of any other residents of the area. As a native of the area since the 50’s, I’ve personally seen the changes of the area between the Broad River, Whale Branch, and the Atlantic. I’ve built 100 homes in the area between 1985 and 2004 before working as a realtor to market and sell homes in the area since 2004. I own a rental property on 16th and rent a home on 8th . My mother lives in and owns a home on 13th and we both work together on Paris Avenue as Apex Team Real Estate.

Keeping the Dry Stack marina in place and reopening the facility to serve the Old Village and surrounding Sea Islands has pros and cons. I understand the objection to the industrial appearance at the end of London Avenue, from the Sands Beach Road area, and from the soon to be developed area of the Port Village. I understand that over the years since the port closure was announced that a group of concerned citizens worked and planned to eliminate the building. I also understand that the operation of the facility could negatively affect the proposed parks, shops, and restaurants with both safety concerns and noise pollution. These are all valid points.

The town council will hear many of these negative points expressed by numerous residents opposed to the facility remaining. I admit I share these concerns as well but offer positive aspects of keeping the building and opening it for business. Over the past few days, as I’ve walked Sands Beach Road to the path though the marsh and over the boardwalk to the beach, I’ve looked at the building debating its fate. To be or not to be, I’ve debated. I’ve studied the adjacent proposed park with the 3 acres that appear to be above the high tide and how it will coexist with the building in question.

One positive aspect of the building is that it could provide a needed buffer for the proposed park from the pending destruction of the existing port property buildings and the construction of the new development. The long and tall façade of the Dry Stack would help to isolate and protect the enjoyment of the park during the five-year building process. I’ve also imagined this building becoming a hotel with east facing rooms overlooking the Sands Beach Park and Port Royal Sound with magnificent morning sunrises and west facing rooms overlooking the new port development with stunning evening sunsets. I’ve also imagined ground level shops and restaurants embracing the Sands Beach Park as people stroll along shaded vistas.  I believe time will take care of the facility, eventually being replaced with a more suitable use for this prominent and priceless property.

Another positive aspect of allowing this facility to remain is taking advantage of the existing resources to immediately bring life to the deceased port property. Opening the business and immediately allowing access to the park is a very cost-effective way to allow people access to our treasured asset. The people of Port Royal have waited over 10 long years to take the property out of hands of the Ports Authority and are anxious take advantage of all it has to offer. The area designated as a public park could very easily be lightly manicured and open for all to enjoy with protection from adjacent development courtesy of the Dry Stack Marina.

A final and important positive aspect of the building remaining is the economic aspect to the developers. We want to have successful developers and the facility that could be easily brought back to life will provide instant attraction to the development, offering new residents and business an amenity to be utilized while they’re waiting for construction of the marina. Leaving the building allows the developers to spend their funds cleaning up the remaining site and not consuming resources removing the existing facility that is in good shape and useable today.

In my opinion, it’s would be prudent to allow the Dry-Stack Marina to stay and open very soon. Time will take care of the building as the development progresses. Careful planning is needed to prevent noise pollution as well as parking issues. My vote is to open the Dry Stack and as important, open Sands Beach Park without delay so the people of Port Royal and surrounding area will have a place to enjoy the magnificent natural beauty of Port Royal Sound.

YOu provided some very good points and i hope it goes your way! 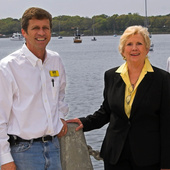