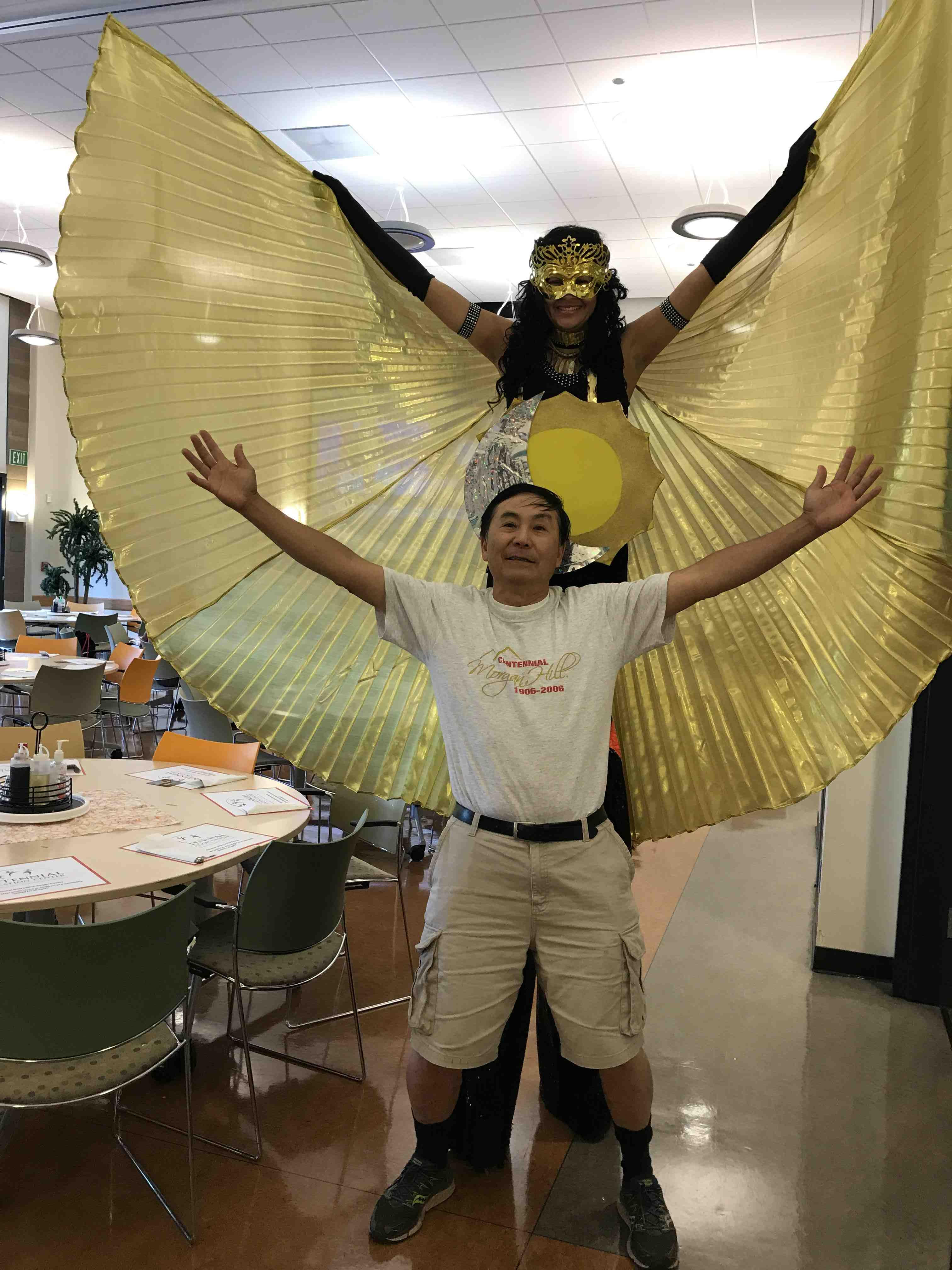 Last week our friends were driving to Idaho to get a better view of the astronomical phenomenon from sunny northern California. I can not believe how crazy people in North America were when army of visitors headed for Oregon.

I only recall seeing solar eclipse once before in grade school days. Dad first explained with a light bulb and a ball passing the ball to show its light blockage.  Observing the event was look through a card box with a white newspaper pasted as screen to avoid direct light. The other solution is put black paint through a piece of glass or look at a bucket of water.

Today,  Chique put on her fancy sun goddess custume. She is a Zumba class instructor at the local Y. She let me feel her stilts. It is not as difficult to balance but heels can get sore at the end of day. Outside there were health conscious people wanting to take a look at the astronomical event(right).  Kids were encouraged to observe the spectacular images of the eclipse filted through leaves (left). All glasses checked out from the library are gone. One can order a set of 10 disposable glasses made out of paper and dark films for $130-$170.  Latina workers at local grocery store also had their version using a cardboard box with a piece of paper that one view direct at its image.   I thought they were giving away kittens.  What do I know?   These home made are actually the best. My brother-in-law Prof. Peter Chen had his own astronomy scientific business at Goddard Research Center in Maryland. He has been proposing and try to get every US president interested in sponsoring his observatory on the moon.  So far he has solved some logistic problems with many patents. I am sure he is a cheer leader today. President Obama saw his movie and thought it was interesting but Peter needs to get someone else support ($) his PC Chen observatory on the moon.

Sam, people did get a bit crazy over this eclipse, and many drove from Denver to Wyoming.

Love your post, Sam Shueh and sense of humor & reality.

We just happened to be on vacation in Hilton Head with 98% totality.  Awesome!

We got about 95% totality here in Charlotte on a mostly sunny day. The clouds stayed away during which was nice. We just stepped out onto our driveway. That's about as far as we were willing to "travel"

Sam Shueh Earlier today, I saw the eclipse partially, and it was special. I was able to see it here with the eclipse glasses. We had about 85% totality in our area.

A cardboard box with a light-colored mat on my driveway worked great for me.

I didn't go to the totality area, but hiked into the hills and watched from a beautiful lake between two of the recognized Cascade mountains. This was the twilight view at 99.7% totality. It was cold!

I saw it through a filter that was a pin hole in my husbands baseball cap, the center; the reflection was on his thigh - this was on the beach.

Pinhole works like a lens. It is upside down image though.

Sam Shueh - did see some of the 'innovations' on TV - along with the eclipse....