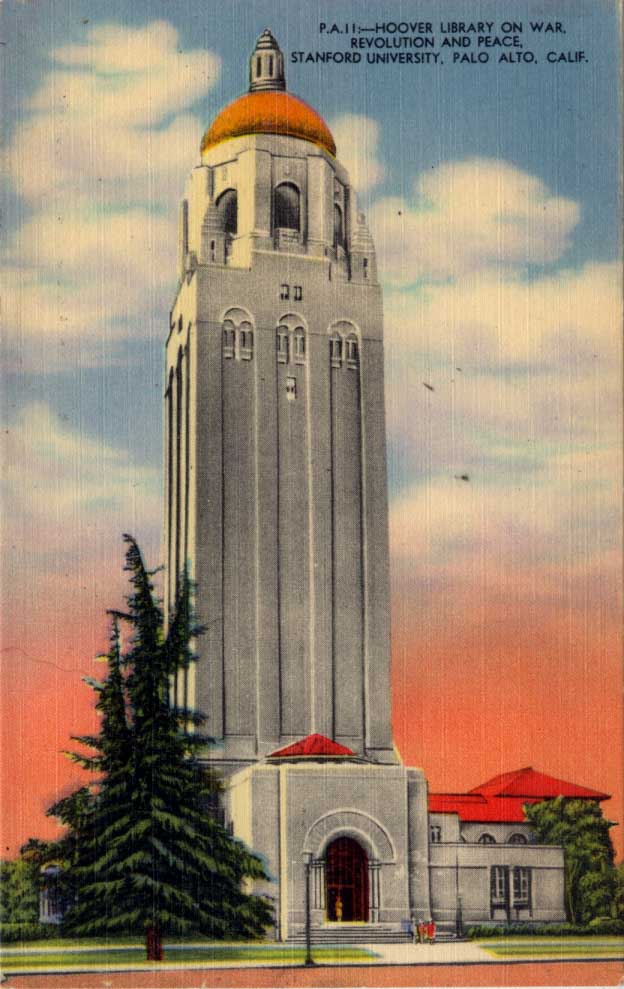 Herbert Hoover was born in 1874, in West Branch, Iowa which is west of Iowa City. Both of his parents were Quakers. Before the age of 10 he lost both of his parents. Hoover lived with various relatives until he entered Stanford in 1891, the very year that it was founded studying mining engineering. He earned his way through college working at various jobs on and off campus.

As one of his entrepreneurial ventures started at the University, in 1892 Hoover and a couple of his school mates decided to bring entertainers to campus. They heard that Ignacy Jan Paderewski, the renowned Polish pianist, would be touring through California, and so they contacted Paderewski him to give a concert on college campus. A business contract , as part of school project was signed, the concert was scheduled. The student entrepreneurs set about marketing and hoping to pay part of the school fees with the proceeds.

What the new concert students failed to notice was the timing was wrong. During the spring break most of the students headed for the California beaches or have gone home. Ticket sales were awful. Paderewski had agreed to perform for ~$2000 (about $75,000 today's money), which was already discounted. They could only generated $1600. Therefore, the day before the concert, the Hoover and his two friends asked to meet with Musian Paderewski. They explained their situation to him, told him that they would give him the entire $1600, and promised to pay him the remaining $400 as soon as they could raise more from other events*. Paderewski, who was known for his rather mean style told them that was not acceptable. He did not want to sell short. Then after some thought Paderewski said to the students that they should keep enough money to cover their expenses for producing the concert and to cover their tuition for the semester. He would take whatever money remained as payment in full for his performance.

As you can imagine, Hoover and his friends were greatly relieved. They learned from this lesson, and became much better event planners and more carefully organized their projects. In 1985 Hoover graduated from Stanford University with a degree in geology. He put his knowledge at several Nevada mines, Australia and a coal mining outside Peiking, China as its chief engineer with a first modern train system. He even worked in Russian in Altais Mountains near China and Mongolia.  He was known as the "Sick Mine Doctor" meaning he was a good turn around mining manager. He co-owned a gold mine in Australia for many years.

In 1914 World War I broke out, the world was engulfed with war effort. At the beginning, Hoover was working in Belgium to help organize the return of US citizens to come home, and later his mission was to help organize the distribution of food to war victims in other countries. In 1917, the US entered the war.  President Woodrow Wilson appointed Hoover to be Director of U.S. Food Administration, the agency for the administration of the Allies food reserves.

World War I officially ended on November 11, 1918. By then millions of Poles were particularily starving. The newly formed government of Poland under US endorsement had no resources with which it could buy food. Desperate needing aids, the Prime Minister of Poland, Ignacy Jan Paderewski, turned to the US for help. The request was sent to Herbert Hoover, as head the agency. Hoover was a Quaker and a generous man. He coordinated the transport and shipment of tons of food to help feed the Polish people in a timely manner.

On his next trip to the US, Paderewski, the Prime Minister of United States of Poland, sought out to the head of the Food and Relief Administration, to express his personal gratitude and Poland. When Paderewski began to thank Hoover, Hoover padded on his shoulder and said, “Mister Prime Minister, I am the one who should be thanking you. You do not remember this, but a few years ago you gave a concert in Palo Alto, CA. The young men who organized the concert could not afford to pay you from their ticket sales, and you forgave then the debt, helping them to work their way through college. I was one of those young men.”

Hoover was a goal oriented manger. He rescused many failing mines and turned them productive.  As President he accomplished more than most politicians and twittered none. He had his foot in the Misssissippi flooding , TVA, Colorado water conservation projects. He set on increase government efficiency and reduce wastes.  He was wed in Monterey, California. He even selected a Native American as first ever Vice President of the United States. Through his administration Native Americans became US citizens.

There is much suffering in our world. There is much that needs to change and improve. There are also moments and places of joy, wonder, and generosity. We need to help the people who are suffering from the Hurricans. What goes around comes around.

Celebrate your compassion and be generous to others!  If your passion is help others servicing homes you will get good at it and continue your path.  If you harvest and putting effort into consistently you will see the results.

* Herbert Hoover was the chief fund raiser selling tickets for First Stanford -Cal University footgame which he did well.

Above shows a postcard of Hoover Institute. It houses collections of history that Hoover collected during his European days in Europe. Some documents were rescued from the Nazis and communist rule. Lou Henry Hoover, wife, also donated materials collected when they lived in China. She was the only First Lady could converse in an Asian language-Chinese. She has a degree from San Jose State University in 1898 and majored in geology (B.A.) at Stanford as the lone female student. At White House, the Hoovers would speak Chinese to each other to avoid being overheard. She designed and built a hillside home that is mostly covered by earth. It is a custom designed concrete home that were solid in design and serves as univeristy president home even today.

Paderewski was an astute real estate investor in CA. He once owned a 2,000 ac Ranch San Ignacio, and Ranch Santa Helena near Paso Robles, CA.