HOUSTON — (October 11, 2017) — Battered by Hurricane Harvey during the final week of August, the Houston real estate market demonstrated its ‘Houston Strong’ resiliency during the four weeks that followed with a rebound in home sales and the strongest rental activity of all time.

According to the latest monthly report produced by the Houston Association of Realtors (HAR), single-family home sales climbed 4.2 percent compared to last September, coming back from a nearly 24 percent plunge in August. All segments of the housing market enjoyed gains except for homes priced below $150,000, with the greatest sales volume reported among homes in the $500,000 to $750,000 range. On a year-to-date basis, home sales remain 2.3 percent ahead of the 2016 volume despite Harvey’s rampage.

As expected, property flooding and continued consumer demand for homes lowered inventory levels. While housing inventory grew from a 3.9-months supply to 4.1 months year-over-year, it was down compared to the 4.4-months supply immediately preceding Harvey’s arrival.

Driven primarily by consumers displaced from housing as a result of Hurricane Harvey’s widespread destruction, demand for lease properties across Houston soared to record levels in September. Single-family home leases rose a staggering 83.6 percent while townhome/condominium skyrocketed 92.2 percent. The average rent for single-family homes was up 7.9 percent to $1,886 while the average rent for townhomes/condominiums climbed 5.4 percent to $1,601.

"I don’t think anyone expected to see home sales in positive territory this soon after a natural disaster of Harvey’s magnitude, but the September report speaks volumes about the incredible resiliency of the Houston real estate market,” said HAR Chair Cindy Hamann. “We are still mindful of the terrible property losses suffered across the region and continue to urge anyone who may have housing available for those in need (for up to 12 weeks of occupancy) to please post it on our Harvey Temporary Housing page at www.har.com/temporaryhousing".

Pricing never skipped a beat during or after Harvey. The single-family home median price (the figure at which half of the homes sold for more and half sold for less) rose 5.5 percent to $232,000. The average price increased 5.4 percent to $291,767. Both figures are record highs for a September.

September sales of all property types in Houston totaled 8,150, an increase of 3.4 percent versus the same month last year. Total dollar volume for properties sold jumped 10.2 percent to $2.3 billion.

With surprising but welcome improvement from the Harvey-influenced August report, Houston’s September housing market indicators provided positive readings across the board as single-family home sales, total property sales, median and average pricing, total dollar volume and inventory were all up compared to September 2016.

Month-end pending sales for single-family homes totaled 6,606, an increase of 13.1 percent over last year. Total active listings, or the total number of available properties in the marketplace, rose 7.4 percent from September 2016 to 40,848.

Single-family homes inventory edged up from a 3.9-months supply to 4.1 months year-over-year. However, that is down from the 4.4-months supply that prevailed before Harvey struck, as consumers scrambled for available housing. Housing inventory across the U.S. currently stands at a 4.2-months supply, according to the latest report from the National Association of Realtors (NAR).

* Months inventory estimates the number of months it will take to deplete current active inventory based on the prior 12 months sales activity. This figure is representative of the single-family homes market. 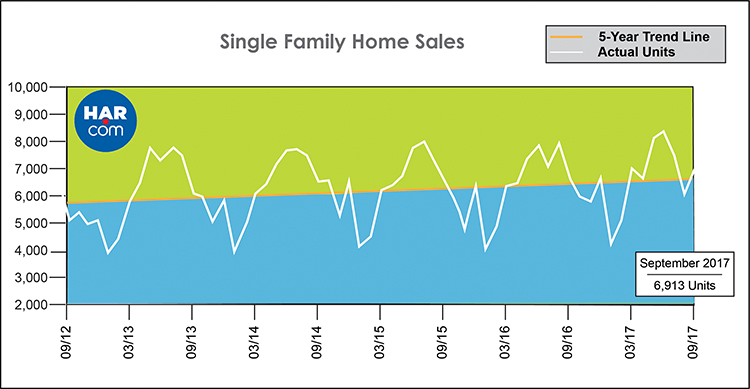 Single-family home sales staged an impressive post-Hurricane Harvey rebound, rising 4.2 percent to a total of 6,913 units sold versus 6,636 in September 2016. That follows a devastating decline of 23.8 percent in August that interrupted 10 consecutive months of positive sales. All housing segments experienced gains except for homes priced below $150,000.

Home prices continued their upward march in September. The median price increased 5.5 percent to $232,000 while the average price rose 5.4 percent to $291,767. Both figures are record highs for a September in Houston.

Days on Market (DOM), or the number of days it took the average home to sell, edged up from 53 to 54 days. Inventory rose year-over-year from a 3.9-months supply to 4.1 months, but that is below the healthier 4.4-months supply that existed during the two months leading up to Harvey.

Broken out by housing segment, September sales performed as follows: 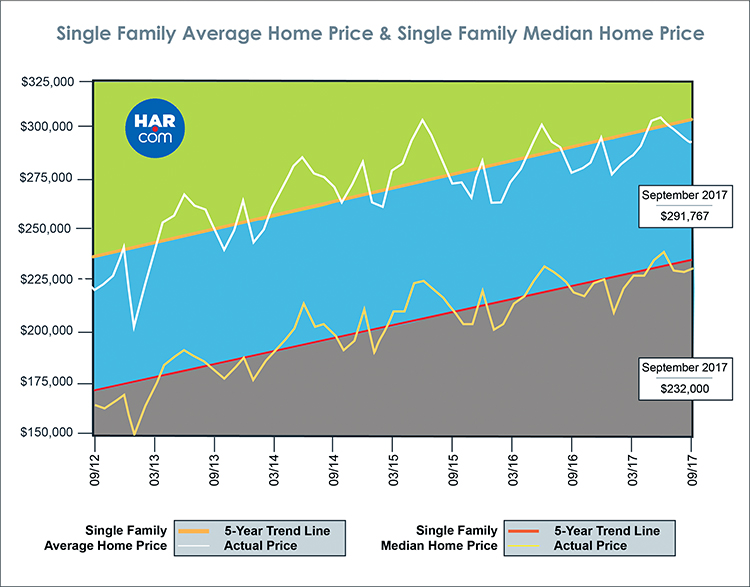 HAR also breaks out the sales figures for existing single-family homes. Existing home sales totaled 5,783 in September, up 3.8 percent versus the same month last year. The average sales price increased 8.1 percent to $282,528 while the median sales price rose 6.8 percent to $219,000.

The townhome and condominium market was slower to recover from the effects of Hurricane Harvey as sales fell 5.8 percent in September with a total of 533 units sold. This follows August’s nearly 30 percent sales decline. The average price rose 3.5 percent to $208,215 while the median price jumped 8.4 percent to $159,950. Inventory expanded from a 3.7-months supply to 4.1 months. 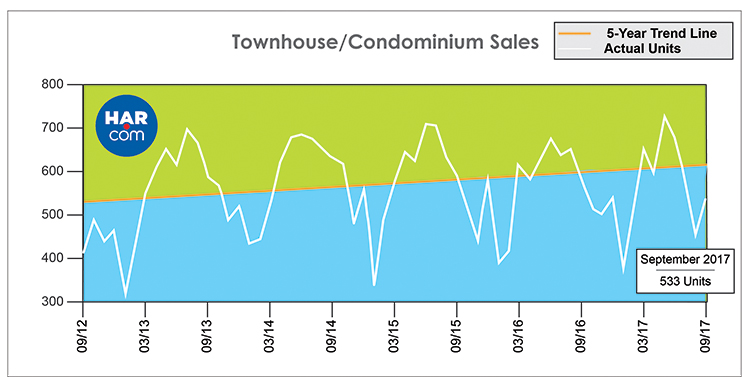 Houston Real Estate Highlights in September
The computerized Multiple Listing Service of the Houston Association of REALTORS® includes residential properties and new homes listed by 36,000 REALTORS® throughout Harris, Fort Bend and Montgomery counties, as well as parts of Brazoria, Galveston, Waller and Wharton counties. Residential home sales statistics as well as listing information for more than 50,000 properties may be found on the Internet at http://www.har.com.
The information published and disseminated to the HAR Multiple Listing Services is communicated verbatim, without change by Multiple Listing Services, as filed by MLS participants. The MLS does not verify the information provided and disclaims any responsibility for its accuracy. All data is preliminary and subject to change. Monthly sales figures reported since November 1998 includes a statistical estimation to account for late entries. Twelve-month totals may vary from actual end-of-year figures. (Single-family detached homes were broken out separately in monthly figures beginning February 1988.)
Founded in 1918, the Houston Association of REALTORS® (HAR) is a 36,000-member organization of real estate professionals engaged in every aspect of the industry, including residential and commercial sales and leasing, appraisal, property management and counseling. It is the largest individual dues-paying membership trade association in Houston as well as the second largest local association/board of REALTORS® in the United States.
Like favorite_border
favorite_border 0
Re-Blog
repeat 0
bookmark_borderbookmark

Happy to see that even though the weather might be volatile, the market is stable. Be well Danny!

This is great news Danny. So glad things are looking up after the hurricane. Looking forward to tracking the recovery as things improve.