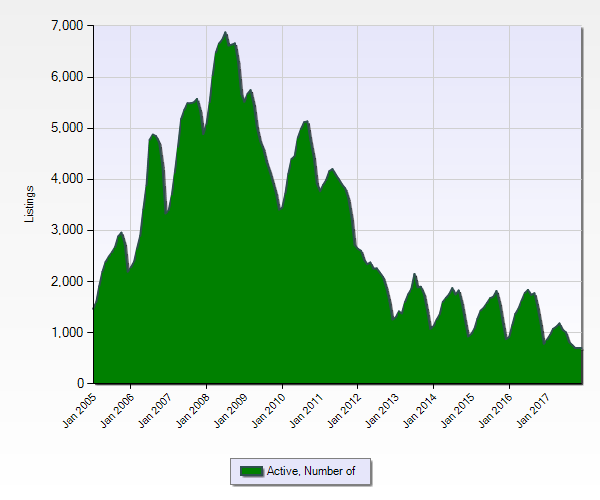 I know there were not that many previously owned home for sale for awhile. The inventory after the Great Recession here has become less and less each year since 2013. People started unloading and made relocation plans to cash out their equity. Those who bought during historical peak years (2005-2006) finally got their wish to have their homes sold this year. Many local home sellers are empty nesters wanting to relocate to a more affordable part of United States. Oregon and Idaho states are often cited. Oregon residents are complaining the Californians are driving the local home prices so high often purchase in cash that locals can not compete with them.

The homes in San Mateo County, CA consist of many older tract homes. Refer to Figure 1 chart, at almost $860 per square feet of areal square feet with a $1.6 million dollar loan (assuming with 20% down) with a 30 year mortgage the monthly payment is about $7,871(P+I) and with property tax, insurance the total monthly obligation is a whooping $10,167. This is a lot of money for a modest tract home.

If a couple both work at Facebook or Google with little other debt they can possibly manage the mortgage. How about average Joe and Jane who earned less?  Moving north to San Francisco County is not an option. Twitter, Uber, Lyft, Pinterest are there and housing and rents in SF are way pricier. Some people relocate to East Bay to find more affordable homes. Some commute from Santa Clara County in South Bay where many Silicon Valley high tech firms are headquartered. Workers often are highly skilled workers developing iPhone, watch, self driving car technology, virtual reality, chips controller and even Nest.  According to US Bureau of Labor Statistics the average annual income in 2016 for this area is $105,527 almost twice that of national average.

The interest rates have been kept very low for many years. A slight increase to combat inflation is healthy and needed. Tech and service industry is the major source for the local economy. During 2016, 54,400 new jobs were added. The unemployment rate is a low 3.2%. This year it has added 15,100 positions and jobs added are way lower than 100,000+ from previous years(2011- ). High tech companies if posting jobs often are not filled due to reluctance for candidates come from other parts of the US. Major reason not coming here is the steep housing cost!

During the massive hiring after the Great Recession the economy rebounded. The rental market was flourishing often enjoying double digit growth annually. We are still in a strong sellers market today. However, the home price increase since 2016 seems to have stalled in many parts of SF Bay area especially in exclusive neighborhoods. At best, both San Mateo and Santa Clara counties (ref to Figures 1 and 2) home prices are sustaining. The rental markets have been down about -6% this year. Why? During the dot com lull there were massive domestic exodus which lasted for 10 years. As a realtor, I recall there were selective entry and experienced employees coming mostly out of Ivy League schools from 2012-2014. I read activist JJ said there was not enough representation from their group at a few well-paid companies. The modern technology depends on highly trained product developers. This is one area most Americans were not trained well and students do not want to devote their effort on harder STEM studies. USA Math achievement score ranks near the bottom of 35 industried countries. As for Science, only Massachusetts state schools attained a mediocre test of a C grade work while the rest of nation fared poorly. It goes without saying those countries with higher achievement is from Asia where many immigrants come to SFBA on a H1b visa. Get a work visa to live and work in San Francisco is a dream for many foreign talented nationals. They are more expandable and do not receive benefits or receiving perks. Some will stay while others will go back and start their high tech business at home later. Whenever Donald Trump or activists want to reduce the number of H-1b visas issued (Ref. red bars on Figure 3) you hear loud objections from Silicon Valley leaders like Zukerburg, Ellison or Tim Cook. Many companies depend heavily on immigrants to develop technology for the progress of the US for less pay. The benefited US employees do not stick around often looking for opportunities elsewhere.

However, started recently the net immigration (domestic and international) into Silicon Valley is close to "zero" as shown above in Figure 3.

Trying to build affordable housing presents tremendous challenges. There are almost no available build-able plots left in the entire area. During Q2 2017 City of San Jose issued just 255 permits for homes with 30 classified "affordable housings".  I can not find any new constructions anywhere inside the City of San Jose for sale today.  Other places like Mountain View, Sunnyvale they have may be 10 units and there is a lottery on them. These new home are sold quickly.

The costs of housing in the Bay Area have risen to such a level that it is expensive and difficult to lure professionals to the San Francisco Bay Area even as the exodus picks up momentum as shown in the chart. Since 2010, San Francisco and Silicon Valley were powerful job-creation machines, producing enormous employment increases. With this housing as a gate it has finally stalled.  Many rental units are vacant as many more condos and apartments were constructed. As some companies are bought out, there is redundancy and companies are not shy to let go some of their best assets-employees. Most employees stay no more than a couple of years as grass looks greener from outside. They have to make top wage to be eligible for a place called their home.

In the near future, my crystal ball for housing shortage- It is still an acute problem(ref. featured chart). On used homes, unless the owners pass away others put "No solicit--no realtor or missionary" signs on their front door. One friend jokingly mentioned, "Until they put me inside a pinewood box, I am not selling my home". On new homes, they are more and more like in New York City condos with high rises, or "tree houses" on a tiny lot.  As interest rate increases more it will be even harder to borrow a jumbo or super-jumbo mortgage. A slow down in VC funding, one will soon see a decrease in employment causing home price to stall if not a gradual fall. This was demonstrated in 1987-1990 and 2000 and will repeat itself or already here started a year ago in these counties.

WoW! New gold rush in bay area.  I can see that. What insightful information you have given to us.

Families moving to the area will appreciate your local real estate market reports.

Good morning Sam - you do have a very unique housing market and those prices certainly way out of reach of most.

Interesting to read that Oregon and Idaho prices are increasing because of Californian's moving there...

I have noticed that people head these directions because of lower cost of living.

Thanks for check out this blog.