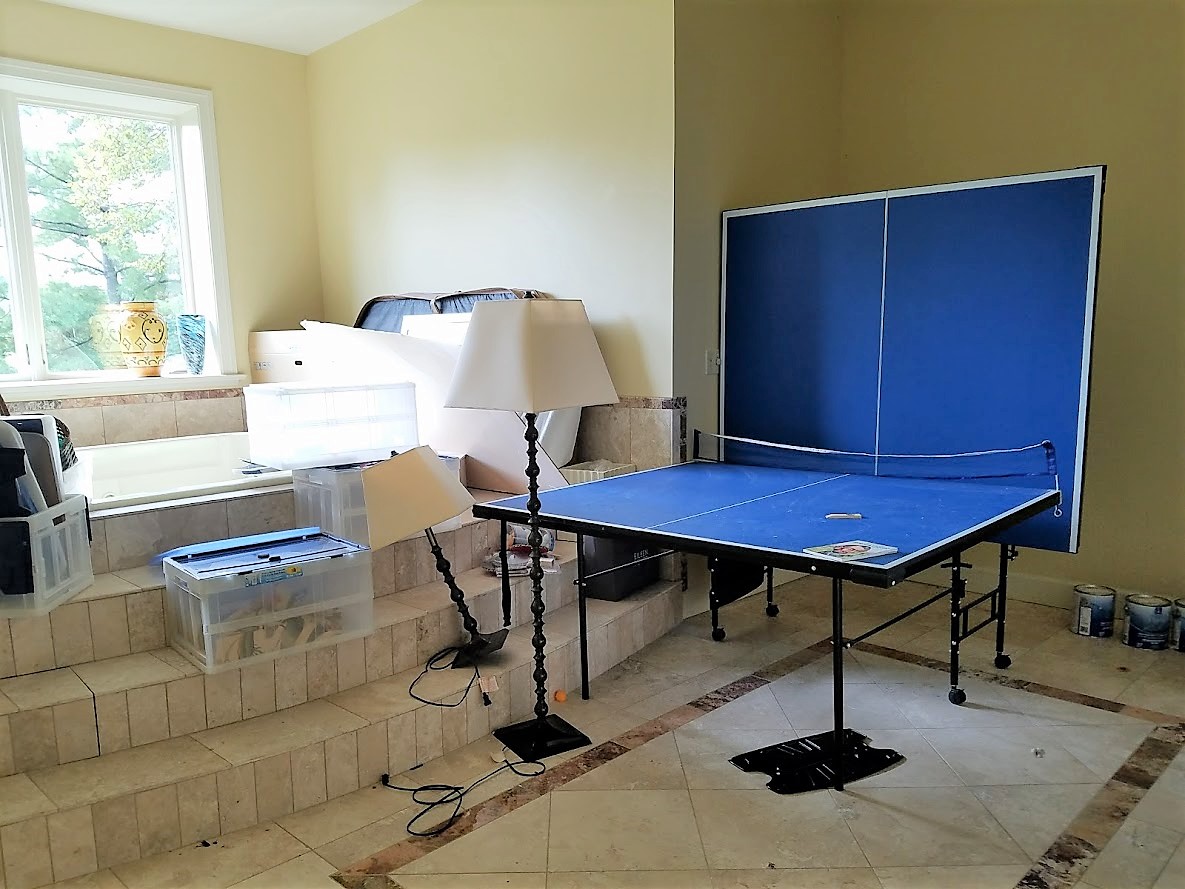 I received a call to go look at a home in the Burton Hills area of Nashville on Saturday morning at 9:30 (high dollar area).  The prospect told me that it was a divorce situation and he was aware that I would come out with the intention of listing the home.  He asked if I could come at 11:00 and I put off my hike with my husband for a million $ prospective listing.

When I arrived the man was sitting in a vehicle in the driveway. The side car garage doors were open and there were two cars inside. A tall, thin man in his 60s waved me up the driveway and got out of the car to greet me.   After a few minutes of him stammering I wondered why we were standing outside and asked him if he'd show me the property. We walked up steep back stairs (I'm carrying my heavy briefcase, wearing heels). When we walked into the kitchen entrance I asked if I could take photos for my own memory and he said yes.  We started touring at the home and he. casually, mentioned that his wife was sleeping in one of the rooms so we were unable to view the second master.  At that point I felt uncomfortable but was in the home and continued the tour.  The home was messy and cluttered but it was mostly updated with 8000 sf. Once we got upstairs he said that, also, his two pre-teens were sleeping in their rooms.  One awoke and came out, sleepy and slouched past us.  He said, "Sport, we're going to take a photo of your room".  The kid couldn't care any less.
We went down to the finished basement. On the way up to the main story he says that it sounds like his wife is awake so I asked him if she knew I was coming.  He says no so I said, "please make sure she knows I'm here before I meet her".  We get to the top of the stairs and he yells, "Jen, are you up?"  I heard no answer.  He says, "I have a guest".  My stomach leaps into my throat.  I feel like the other woman!  Ewww!
I balanced myself on the second step and I hear her snap, "You may as well come out; I can see you".  So I walk up, picking up my heavy briefcase I had left at the blocked-by-a-tuba front doorway and face a small, loud woman in PJs who had, obviously, not had her morning coffee yet.  She is reprimanding "Jeff" for bringing me over without asking.  It's then my turn to be rebuked. A finger points at me.  "He had no right to invite you here without asking me. I'm supporting him, he doesn't work and he won't move out!  He had another agent here last weekend!  How do you know him"?  "Um, referral from the internet", I muttered. "I don't know him".  She retaliates, "Give me your card!".  I dig a little and tell her that it's in my car and she demands that I go get one for her.  That's when the table turned for me and I knew who the culprit really was.  I also knew I wasn't getting this listing.
I start out the back door and he follows, saying that he'll walk me to my car and bring the card back.  Once I get down to the car he stammers what I interpret as he would like for me to provide a CMA with a low value so that he could screw his wife out of her portion of the proceeds.  I tell him that I will provide a true evaluation. He mentions that he might stay in the house and then he says that she's a lawyer.  I just want to go home.  It was then that she comes running down the back stone stairway yelling, "Did he tell you that he's staying in the house?!"  I say, "he just told me he might stay to which she replied, "He's a liar!!"  She turns and leaves while he is asking me if I'll still do the work for him. I'm trying to go but he's standing where I can't shut my car door, texting me his email address.  Finally he steps away and I escape down the long, steep driveway.
I'm relaying this story because it's one for the books.  Could there have been a better way to qualify this lead before going?  Maybe. I'm always preaching to qualify buyers for safety and time value reasons but sellers?  I know where they live, how much they paid for the property, who they are.  As Forrest Gump's mom always said, Life is Like a Box of Chocolates.  You never know what you're gonna get.
Like favorite_border
favorite_border 0
Re-Blog
repeat 0
bookmark_borderbookmark

ActiveRain Community 3 months ago
bookmark_borderbookmark
Where does the Customer Service line end?