Almost everyone across Central MS enjoyed a snow day last Friday, December the 8th. Classes were canceled for most students across the metro, while many employees went to work late or not at all. A beautiful blanket of snow covered Brandon, Jackson, and the surrounding area. The Jackson International Airport reported 5 and 1/2 inches of fluffy white snow. Throughout the day, hundreds of snowmen and snow angels appeared in front yards across the south, while adults and kids alike enjoyed the unofficial holiday. My plans for the day consisted of picking clients up at the Jackson Airport at 11:00 a.m., then viewing homes for sale in Madison and Ridgeland. The newfallen snow put a damper on my plans as the buyers flight was delayed for several hours.

While waiting for the plane to land, I enjoyed a simmering bowl of loaded potato soup from the neighborhood deli. The Applebees employees built a snowman beside the parking lot.  I thought it made a cool photo.

When the plane finally landed mid-afternoon, we began our tour of Ridgeland and Madison. We were able to see a few homes before dark. Fortunately, the roads and rooftops were clear the next day, so we resumed our search for a Mississippi home.

While most residents enjoyed a snow day last Friday, "Neither snow nor rain nor heat nor gloom of night could keep me from my appointed rounds". Hi Pat- I can remember looking for a house in Leesburg, VA in the snow!!!  You do what you have to do!!!

Good afternoon Pat - I hope everyone was safe.  When unexpected snow comes to areas these areas it could be dangerous.

Beautiful photos Pat. I like your motto...you certainly earned it on this cold & wintry day

I am definitely old. It could be 14 inches high and you went to school.

Joe Pryor - don't tell anyone that and they will NEVER know. :-)

Debe Maxwell, CRS - I borrowed it from the postal service.

Grant Schneider - there weren't many cars on the road that day, and fortunately the snow was more of a powder than wet and slushy. It was SO beautiful.

Those are nice photos illustrating the snow in your area, Pat.  Love the snowman! 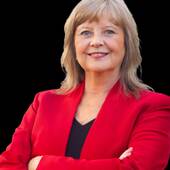