Well those are just two of the reasons I haven't been on AR in many many months. I was also distracted by a wonderful summer where I spent most of my time at Confluence Lake. Lucky the Wonder Dog enjoys swimming, and I worked on my paddle boarding skills. I bought a paddle board before the summer really set in. I'm not too bad at it, either.

Improvements on the house have been slow, but the project is moving along. I'm living in the house, too. This is the first house I've ever bought on my own. People in town make a point of telling me how much better the place already looks...a little cleanup goes a long way, and I appreciate the encouragement from others.

I had a busy year with clients and sold some higher end properties. I also sent out a referral to AR member Hella Rothwell. That worked out great. Hella did a wonderful job, and my client is very happy. I've always touted AR as being a great referral source. I still believe that to be true. As the holidays approached I was busy making vacation plans. This was a big one. I was gone for 2.5 weeks. My trip started out in Denver, with friends, where we went to see a Broncos game. I covered over 5,000 miles and eight states. I traveled via planes, trains and automobiles and did some wild theme park rides in Florida. I also visited with alligators in the Everglades. My cousin and I drove from Illinois to Florida and toured the state. I didn't get a scratch on me. That's my cousin, AJ, in the picture.

They say most accidents happen close to home. A few days after being back, I broke my leg. Most people don't end up breaking their leg at a dog park, but I did. One friend commented that it could only happen to me. I was hit from behind by two speeding dogs. I didn't hear or see them coming. Even with all of the skiing, hiking, climbing, rafting and mountain biking I've done in my life, I've never broken a large bone. I've had some pretty good incidents and a lot of brusies and sprains, but never anything like this. Lucky wasn't a party to the accident. But he was there with his ball in his mouth looking down on me while I was laying on the ground. It was time for me to throw the ball yet again, but I couldn't. People were very helpful. Dennis, a dog park regular and good friend, went to get ice. Joyce, another regular and good friend, drove my car down to the gate so I didn't have to go far.

No one wanted me to move. Everyone thought I had hurt my back. It was my left leg. I thought it was just badly sprained. After a week of fairly extreme pain, I finally went to the doctor. I still thought it was just a sprain, but I was wrong. So I spent five weeks in a cast. The doctor said...don't put any weight on it. I didn't. I had crutches and a wheelchair. The house is a mess inspite of the friends that came over to help me with 'things'. Now the cast is off, and I'm working on healing the sprain. It goes from my foot all the way to my knee. I'm feeling very optimistic that I will completely heal. So that's a review of where I've been in the last 10 months. I haven't forgotten about my AR friends. Kathleen Daniels  and I have had some nice phone visits. Scott Godzyk ...I have thought of you and wondered how things are going on the BPO front. I really thought of you during the football playoffs. Congratulations on having The Pats go to yet another Super Bowl. Debbie Reynolds  and I have been good friends for a long time. I thought of her often and wished I could have taken a detour when I saw the Clarksville interstate turnoff as we barreled through Tennessee on our way to Florida. I could go on, but this post is already over 700 words.

At the office this week, I was reviewing some marketing plans with my broker. I mentioned that I need to get back to blogging. I do get business from my blog. So AR is certainly in my marketing plan for 2018.

Thank you to everyone that has reached out to me over the last many months. It really means a lot to know I'm not just another cyber figure you comment on for points.

Hi, Bob Crane ...thanks for stopping by my post. Thank you also for calling me on my birthday. I'm glad to be back and seeing so many familiar faces.

Hi, Laura. Thank you very much for your wonderful comments.

Hi, James...I'm so enjoying reading your history lessons. Thanks for stopping by my post.

Hi, Roy. Thank you so much for coming by and taking the time to read my post.

Hi, Gabe...it's good to see you again. Thanks for stopping by.

Hi, Brian England ...you haven't missed me. I haven't been here. It's been a busy, crazy and fun year. So I took some time away from blogging. Thank you so much for stopping by.

Hi, Sheila...thank you for coming by. It's good to see you again.

Hi, Grant...it's good to be back. Thank you for stopping by.

I know, Scott. Pay is going down, but I won't settle for that. I have my price. They can pay it or not.

Thank you for stopping by, Marney.

Hi, Yolanda...thank you so much for coming by.

Hi, Jeff...it's good to see you again. I'm taking it easy...at least as easy as I can. Overdid it a bit too much today, but I'm resting now. I will get there. Although I still hope I can do those hikes I planned to do this summer.

That means a lot. Thank you, Silvia. I appreciate you coming by.

Hi, Lynn B. Friedman ...I already finished Debbie R's challenge. I plan to do the one for new agents. I've been thinking about what I'm going to write for that one.

Yes I'm back, Nathan. Thank you for stopping by.

Thanks for stopping by, Lisa Von Domek . I can't wait to share some more dog stories.

Hi, Caroline...I'm managing, but it hasn't been easy. Although I think this was the Universe's way of telling me to take some time and slow things down. I certainly did that.

So glad you are doing well Debbie!  Thanks to Debbie Reynolds  I saw that you are back and just had to stop by and say hello. Congrats on buying your first house and sounds like you celebrated with a road trip, but then forced to contemplate your life thanks to those 2 dogs! May you have a speedy recovery and pick up where you left off!  Take care.

I'm so glad you stopped by, Gloria Todor . The sprain is taking a long time to heal. The break healed just fine, but I'm still wearing a brace and hobbling along. I won't be walking any acreage parcels at this time, but I'm sure it will heal, and I'll be back to normal...hopefully before the summer. 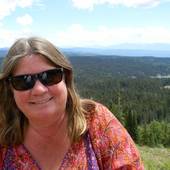