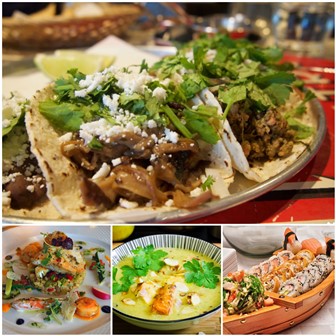 For the entire month of February, 100 North Shore restaurants will be participating and offering various specials and discounts including dining 2-for-1, free appetizers or desserts, and prix fixe meals.  Gina Speckman, director of the Bureau, said:

"Not only do we have gifted and award-winning chefs, but the diversity of the cuisine that is offered in our region rivals any major city in the world."
This year's number of restaurants - 100 - is the highest it's been since the promotion first began in 2010. With so many offerings, I think it's safe to say that there is something for everyone. --Valentine's Day, February 14, is excluded from the Restaurant Month promotion. Here is a link to other North Shore offerings on that day: Valentine's Day Promotions.

--I was surprised to see no Wilmette restaurants on this list - unfortunate because there are so many good ones. I called the Wilmette/Kenilworth Chamber and spoke to their executive director Julie Yusim who told me that Wilmette is not a part of the Chicago North Shore Convention and Visitor's Bureau.

I would love to visit your city and try all of these restaurants!

Hello Margaret Goss I wish I were back for this month's food fest...enjoy!