January 2018 homes sales in the Indian Land, South Carolina area of the Charlotte metro region continued the trends we've seen since 2016 with strong demand for homes resulting in continued increases in home prices, coupled with significant decreases in availability of affordable homes priced under $250,000.

The average sale price of homes in the Indian Land area (29707 zip code) increased 8.3% to just over $321,000, while average days on market for property listings remained flat at 49 days compared with January 2017. Median days on market were just 22 days in January 2018.

Price per square foot also increased by 2.4% to an average of $126/square foot during January. The days when homes in Indian Land in Lancaster County versus adjacent Fort Mill in York County were much less expensive are essentially gone for good.

Closed sales of homes in Indian Land were up 0.4% versus the same period last year. Meanwhile, pending sales in January 2018 were up 6.9% versus January 2017. Much of this somewhat anemic performance in closed sales can be attributed to the lack of inventory in homes priced under $235,000 where there is just one month of inventory and where the number of homes in this price range available for sale were down 35.7% compared with one year ago.

The average percent of original list price that sellers received for their homes was 97.2%, showing minimal negotiating room for Indian Land homes.

The Indian Land area's months supply of homes in January 2018 increased 16.7% to 3.5 months versus one year ago -- but with less than four months, still continuing to indicate a seller's market in Indian Land, South Carolina. Inventory of resale homes is lower at 3 months. New listings were up 9.4%, but it's worth pointing out that new listings of affordable homes prices under $235,000 were down 23.1% compared with one year ago with only 1 month of inventory... clearly putting pressure on closed sales despite the overall increase in new listings. 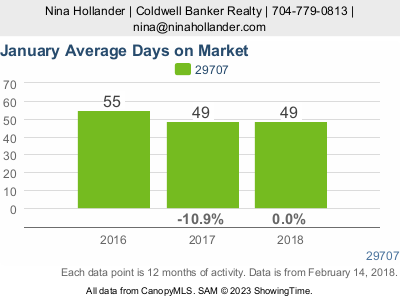 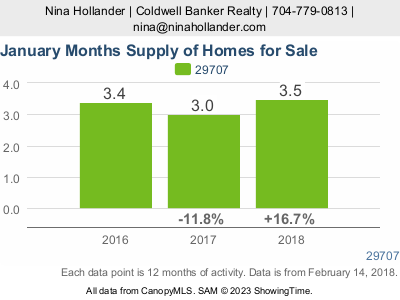 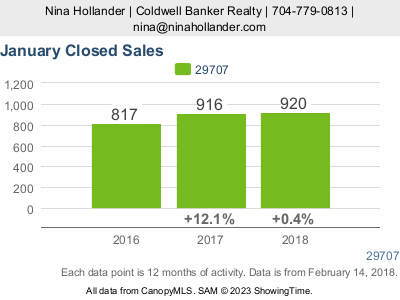 WONDERING WHAT YOUR INDIAN LAND, SC AREA HOME IS WORTH?

If you are considering selling or purchasing a home in Indian Land or anywhere in the Charlotte metro area, I'd love an opportunity to earn your business, exceed your expectations, and to prove to you that:

One thing is for certain if I ever have to know something about the neighborhoods that you cover I would not hesitate calling you. You do an excellent job with your market reports Nina Hollander

Paul S. Henderson, REALTOR®,CRS, ~ thanks, Paul. At the end of the day, either do it right or don't do it at all!

Families on the move will appreciate your local real estate market reports.

Roy Kelley ~ hi Roy... and thanks as always for stopping by. Our market is still going strong, as you can see.