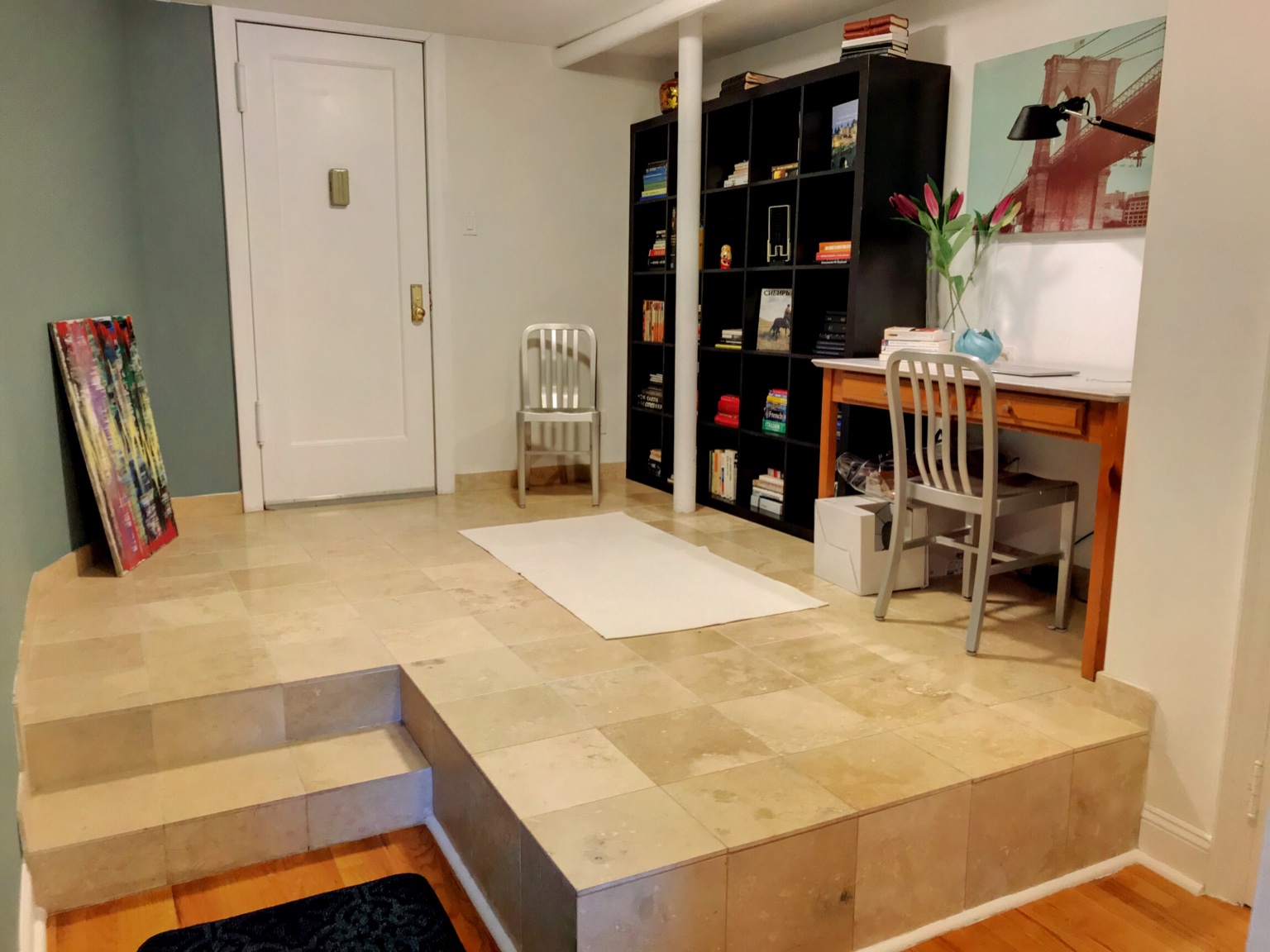 In New York City, space comes at a premium.  Putting down a huge chunk of your monthly income for a place to call home is the reality New Yorkers deal with.  New York is also the capital city of dreams, dream makers, and creative minds that come together and wonderful things are created.

The English poet, Wystan Hugh Uden, arrived in New York in 1939, he lived on East 23rd Street, and eventally settled into a second floor apartment in Brooklyn Heights.  His living quarters were so cold that the toilet no longer functioned, and he ended up using the toilet in the liquor store at the corner.  In spite of his mean living conditions, he managed to become one of the greatest writers of the 20th Century.

William F Buckley Jr. lived at 778 Park Avenue for 40 years.  He founded the National Review magazine in 1955, and hosted 1429 episodes of the television show, Firing Line, and also wrote a nationally syndicated newspaper solumn along with numerous spy novels.  Truman Capote published COLD BLOOD, and purchased a 25th floor apartment in the UN Plaza Coop, and lived there until his death in 1984.

Willa Cather, a Novelist, wrote at 5 Bank Street for many years, At least 8 novels were conceived at this New York address before the Seventh Avenue Subway construction caused her apartment building to be taken down.

John Cheever, grew up on the street that 61 Jane Street now occupys.  Seven houses were razed to make room for the new building in the early 60s.  Cheever dropped out of school in 1930 and published his first story.  Noel Coward, the playwright, wrote from three different Manhattan addresses.

EE Cummings came to New York in 1916, fulfilling his dream of living in a NY garret.  He rented a studio at 21 East 15th Street, and secured a job at Colliers after his graduation from Harvard.  It was a 20 x 20 room with a 10 foot ceiling and a small kitchenette.

The list of folks who came to New York goes on and on, Joan Didion at the Apthorp building, Nora Ephron also at the Apthorp.  Charles Henri Ford a surrielist poet, magzine editor, photographer, collage artist spent many creative hours at 1 West 72nd Street.

Ernest Hemingway rented a one bed one bath 900 sq foot apartment in the fall of 1959.  He wanted privacy and attempted to continue his writing muse.  Emma Lazarus resided at 18 West 10th St, and was a poet.  Her infamous words are know throughout the world,

"Give me your tired, your poor,

The wretched refuse of your teeming shore.

Send these, the homeless, tempest-lots to me,

I lift my lamp beside the golden door."

Eugene O'Neill was born in a Broadway Hotel room in Times Square, and found himself a frequent New Yorker as he wrote The Iceman Cometh and Long Day's Journey located at 242 Fulton Street.  The saloon and rooming house was torn down to make way for the original World Trade Center.

Edgar Allen Poe living in New York between 1830-1840's and stayed close to the Village for all those years as he penned, "The Raven"

and JD Salinger, lived on East 57th Street shortly after writing Catcher in the Rye.  John Stenbeck found Gramercy Park, EAst 51t Street and E 72nd St brownstone, He wrote for the New York Herald Tribune and penned his novels, Cannery Row, Winter of our Discontent and Travels with Charley.

Dylan Thomas did not live fulltime in New York, but he did drink himself to death at his favorite bar, the Whitehorse Tavern in 1953.

Mark Twain lived at 14 West 10th STreet, and 21 Fifth Avenue.  John Updike lived in a small 2 room apartment on West 13th Street for many years before heading to Ipswich Mass, so his growing family had more room.

Thomas Wolfe came to New York in 1924 and taught at NYU and wrote Look Homeward Angel.

Tom Wolfe lived at 232 East 62nd Street in a four story 20 foot wide brownstones until he sold it in 1990.  He wrote Bonfire of the Vanities, before buying a 12 room apartment just North of the location.

Miles Davis bought a brownstone in 1958 at 312 W 77th St, and lied at this location for 25 years.  Duke Ellingotn, Upper Manhattan, Roberta Flack and Judy Garland both called The Dakota home.  The Gershwin twins lie and composed at 132 EAst and 123 E 72nd Ave.

Jimi Hendrix called several locations home in New York City, but it was 59 West 12th Street where he made home recordings; Stepping Stone, Send My Love to Linda, Last Thursday Morning, Freedom, Bolero as well as others.

John Lennon lived in several locations in New York, but his final home at The Dakota, ended tragically with his murder in 1980

Madonna called 65 Central Park West home in the 80s while married to Sean Penn and both Barry Manilow and Bette Midler had homes in 451 Washington Street.

Joni Mitchell moved to NYC in 1967 and had a 2nd floor, front facing, one bedroom apt on West 61st street.  She called this one of the most prolific song writing periods of her life.

LIza Minnelli came on her own at age 16 and stayed at the Barbizon Hotel for Women at East 63rd Street.  The building is now called The Melrose Hotel.

Even Elvis Presley had a home at 65 West 54th Street in NYC.

Frank Sinatra designed his two floor, 3 bedroom apartment at 530 East 72nd Street when the building went up in 1961.

Sting and Billy Joel share the same address at the Brentmore, and Barbara Streisand called 1157 Third Ave home for many years.

The list goes on and on.... the desire to come to New York City feel the energy, the vibe, the history of the millions of other humans who are walked the streets, climbed the stairways, touched the bannisters, and watched the sunsets over the Atlantic Ocean with Lady Liberty framed in that riotous color has fueled decades of artists.

The dream has not diminished, but the resources to make it realized can be very difficult for the budding artist.  Space is at a premium in New York City.

There is a place where the perfect conjoining of space, light, energy and convenience come together.  It is the perfect home for a budding artist, writer or composer.  A magic little corner in Clinton Hill, Brooklyn is for sale.  Bring your vision to reality in this artist's nook coop home.  True 2 bedroom with plenty of outdoor space, an adjacent tree lined, private garden, AND a garage.  It is also the perfect place to keep those large canvases, or artist supplies if you don't have a car!  This is the best priced two bedroom in the neighborhood, and it is waiting for someone to come and make it their home.

This is possibly where the next Steinbeck or Lennon will create something memorable.

Maybe it is you, or someone you know.