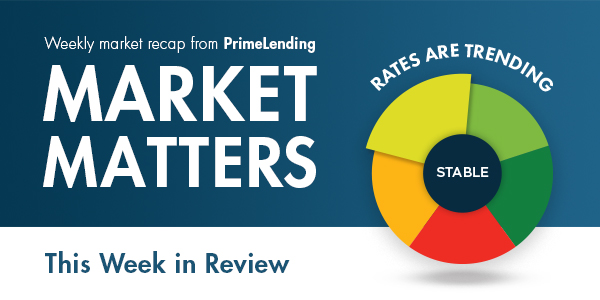 Existing Home Sales for January fell 3.2% month over month, and have now dropped 4.8% year over year. The market call was for a decline of 3.6%, so the result was just slightly better than expectations. Inventory, now sitting at a 19-year low, remains the real reason for the decline. While existing sales have been choppy, they are certainly on an uptrend, and that keeps sentiment on the positive side looking ahead.

The MBA mortgage application volume for the week ending 2/16 showed purchase business fell 6%, with refis down 7%. The composite index was off 6.6%. With interest rates on the rise, inventory shortages, and seasonal influences well in play, the decline in apps as of late has been somewhat expected.

The biggest headline of the past week was the release of the FOMC Minutes from the January 30-31st meeting. The Minutes suggested that the current rate of near-term growth in the economy would possibly exceed initial estimates, while inflation moves toward stated targets at 2%, with wage growth at 3%. Where the more “hawkish” piece of the Minutes came to fruition was the mention of more concerns in the market of additional rate hikes in the year ahead, 3 expected, could possibly be 4. Finally, the Fed mentioned tax legislation many times in the release with some committee members expecting the effects could be greater in the short-term, in turn, helping to accelerate growth rates in the economy.

The past week has been another wild ride in the markets, to say the least. After some heavy sell-offs, followed by a few days of better rates/pricing, the market has essentially now traded back to the levels we opened the week with. Technically, 10s are still hovering through our defined trading range of ~2.80-2.94%. A test of the 3% handle in the short to medium-term is still very much in the cards, and as of now, we think the market is just “pausing.” There are a lot of dynamics still left in the market place right now and the important thing is to not lose focus. The past few trading sessions have given back some of that pricing you might have lost earlier in the week. The best bet is to use it to your advantage and get your loans locked in. Until we see the market post yields back into the 2.70s, the overall trend to higher interest rates is still the world we live in.

Except for a few Fed events on Friday, the week closes out quietly on the data front. Looking ahead, we have a full calendar of economic data to contend with next week. Some of the highlights include releases of New Homes Sales, Durable Goods Orders, Q4 Real GDP, Pending Home Sales, Personal Income & Spending, and finally University of Michigan Consumer Confidence