February 2018 homes sales in the Indian Land, South Carolina area of the Charlotte metro region continued the trends we've seen since 2016 with strong demand for homes resulting in continued increases in home prices, coupled with significant decreases in availability of affordable homes priced under $250,000.

Price per square foot also increased by 2.4% to an average of $126/square foot during February. The days when homes in Indian Land in Lancaster County versus adjacent Fort Mill in York County were much less expensive are now a thing of the past.

Closed sales of homes in Indian Land were up 1.4% versus the same period last year. Meanwhile, pending sales in February 2018 were up 14.5% versus February 2017. Much of this somewhat anemic performance in closed sales can be attributed to the lack of inventory in homes priced under $235,000 where there is just two months of inventory.

The average percent of original list price that sellers received for their homes was 97.6%, indicating minimal negotiating room for Indian Land homes.

The Indian Land area's months supply of homes in February 2018 increased by one-half of a month to 3.5 months versus one year ago -- but with less than four months, still continuing to indicate a seller's market in Indian Land, South Carolina.

New listings were up 15.4%, but it's worth pointing out that new listings of affordable homes prices under $235,000 were down 11.4% compared with one year ago with only 2.1 months of inventory... clearly putting pressure on closed sales despite the overall increase in new listings. 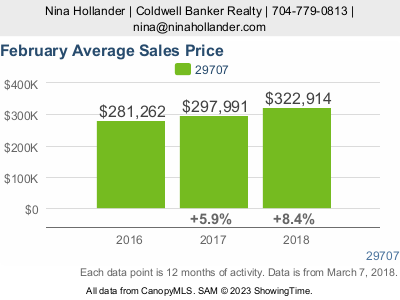 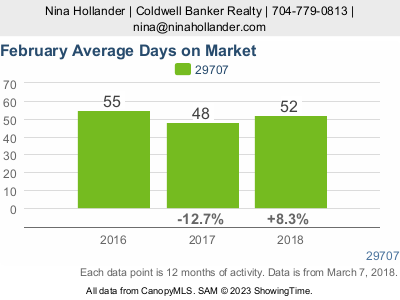 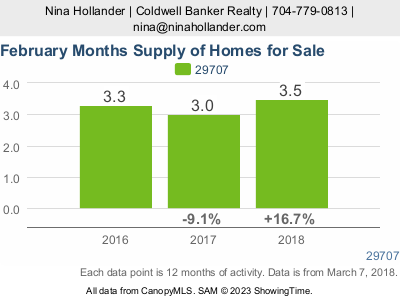 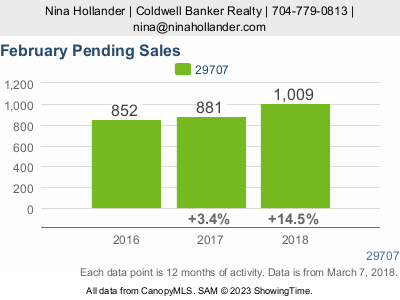 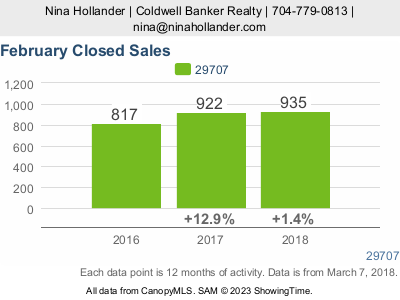 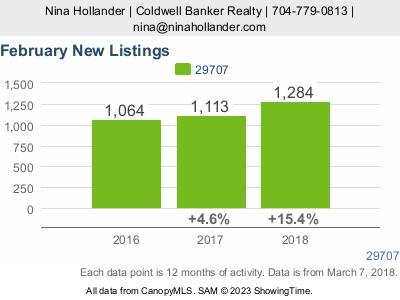 WONDERING WHAT YOUR INDIAN LAND, SC AREA HOME IS WORTH?

If you are considering selling or purchasing a home in Indian Land or anywhere in the Charlotte metro area, I'd love an opportunity to earn your business, exceed your expectations, and to prove to you that:

Nina it is amazing your area has been able to continue to show positive number with the limited inventory that has been going on for a while.

Very interesting market statistics, and presented clearly for all to see. Lack of inventory is a problem in my area, too.

Your market is "twinning" with mine Nina Hollander low inventory, increased prices and sales!

As always you have shared some useful information for buyers, and sellers, to help them understand what's going on in the local market...and trends that we are seeing here as well. Now those interested buyers and sellers just need to get in touch with you for help with their purchasing and selling decisions in this challenging market.

George Souto ~ hi George... we do have parts of the metro area where sales a bit down due to lack of inventory, but somehow we keep managing to pull out sales for our buyers.

Lottie Kendall ~ thanks, Lottie. I suspect there are many of us in the Rain dealing with the thinventory issue!

Lisa Von Domek ~ hi Lisa... "twinning" a new word for me, but I love it. We are twinning with thinventory!

Jeff Dowler ~ hi Jeff... I keep trying to get the word out that waiting to buy or sell will not benefit most people... sellers are really frightened that if they sell quickly, which most do, there won't be another home for them on the other end.

Gita Bantwal ~ thanks, Gita. Trust you've had a good week and are looking forward to a nice weekend and aren't too snowed under.

Nina Hollander - I like your slide presentation. The music and the pace to read the marketing report was just right. You always careful in how you market your area and what you choose to get the information out in a very professional manner.

Nina, you do such a great job with your market reports, and valuable information for Indian Land for both buyers and sellers.

Families moving from the DC Metro Area will love your attractive home prices and the prospect of having lower real estate taxes.

Patricia Feager ~ hi Patricia... thank you; it's easy to do on Lumen and free to make that little video.

Roy Kelley ~ hi Roy... even though we complain about prices and taxes here, compared with many other parts of the country I know we have it good here.

Joan Cox ~ hi Joan... it's hard to compete on google with th ZTR's but I'm always hopeful that my market reports rank right up there after all the big boys.

Thanks for the reminder about the Indian Land report, you know I don't want to miss it.  I hope that your weekend will be enjoyed my friend!!!

Brian England  well, when I didn't see you I was beginning to worry, Brian... I know how much you look forward to the Indian Land updates!