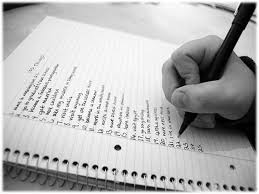 Tim Allen was recently on a radio program I listen to.

His story is an interesting one, I was fascinated to listen to him tell how he went from literally facing life in prison to staring in the number one TV show.

He faced life in prison with new mandatory sentencing laws. Luckily for Tim, he was able to cut a deal with prosecutors and get 3-5, he was released in late 1980. Shortly after his release he said he knew he only had two choices, die in prison or worse or find a new direction. He began to read books written by anyone he considered admirable, people ranging from Albert Einstein to Bob Hope. He said he noticed each mentioned one common thing, they all made lists each day of what they needed to accomplish to be successful int he future.

Tim took that advice and began to write lists. He made his goals but also, daily, wrote a list of what he believed he needed to acomplish that day to reach his goals. Within a short period Tim was touring the country doing stand up and by 1991 he started in Home Improvement the number one show at the time. Amazing what making a list can do.

I think Tim Allen is so funny in any role he does.  I make lists of accomplishments I need to complete daily... I need to do one for my future goals.

Hi Jim: Very good advice! I have always believed in lists---my family used to laugh when my parents sat down time after time writing lists of things they needed, wanted to do or make. Those lists were adhered to whenever possibe but circumstances always left many on the "drawing room" floor...lack of funds was the problem! I always appreciated that they at least made the good effort! Thanks for sharing....

Good morning Jim. I am a big list person too. This is a terrific post but hard to read because the font is too small. Just saying......

Yea, something happened to it when I made the post, not sure what! The type went crazy!