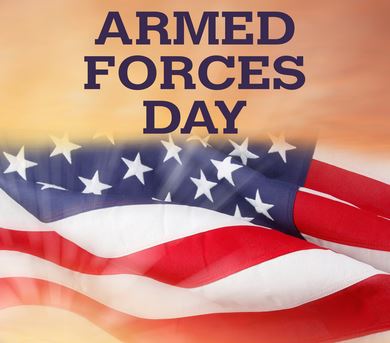 While President John F. Kennedy established Armed Forces Day as an official holiday in 1962, it was President Harry S. Truman, who began the effort to set aside a day to recognize the service of our armed forces. In 1949,  Armed Forces Day was established to replace individual Army, Navy, Marine Corps, U.S. Coast Guard and Air Force Days. The first official Armed Forces Day took place on May 20, 1950, and was themed “Teamed for Defense.”

Armed Forces Day seems to be a holiday that seems to fall "under the radar," as compared with Memorial Day and Veteran's Day. But please take this opportunity to observe Armed Forces Day and Week by thanking a member of our brave military for their patriotism, their heroism, their service, and their sacrifice. There is a very true saying that "heroes don't wear capes, they wear dog tags."

"Never in the history of the world has any soldier sacrificed more for the freedom and liberty of total strangers than the American soldier."

"The cost of freedom is always high, but Americans have always paid it. And one path we shall never choose and that is the path of surrender or submission."

"Freedom does not come without a price. We may sometimes take for granted the many liberties we enjoy in America, but they have all been earned through the ultimate sacrifice paid by so many of the members of our armed forces." Thanks for the reminder, I forgot all about this one and have other plans for tomorrow.

Nina our military service men and women deserve our respect and gratitude.

Thanks for the reminder! I will have to thank my dad when I get home! Have a wonderful evening!

Hi Elizabeth... you and I grew up when what we know today as Veteran's Day was known as Armistice Day. To the day she died, my Mother called Veteran's Day by it's old name. I also think that because we grew up during a time when there was a draft we all knew more people who served, which is less the case now that it's an all volunteer military.

Will Hamm ~ hi Will... Armed Forces Day seems to get lost in our minds as my post said with Veteran's Day and Memorial Day being much more known.

Yolanda Cordova-Gilbert ~ hi Yolanda... and thank your Dad for his service from me, as well!

George Souto ~ hi George... our military does deserve our respect and our thanks and so much more, as do their families, who also "serve."

Debb Janes EcoBroker and Bernie Stea JD ~ hi Debb... so sad to hear about your nephew... as long as this war has been going on, it always still amazes me how few people I run into who know someone who served, much less paid the ultimate sacrifice. Of course, your family misses him, but I'm sure also remembers him with pride and love.

Thanks for the reminder -  Even though its on our calenders our local media seems to have forgotten to do a segment honoring or vets and this day.  I know that memorial day is coming up towards the end of the month.  But Arm Forces Day should be recognized.

Michele Cadogan ~ hi Michele... I don't believe our media has much interest in our military... they have no choice but to recognize Memorial Day because it's a three-day weekend, otherwise they'd probably ignore that, as well.

Living in a Military community (Minot Air Force Base being about 12 miles away) we greatly appreciate our troops every day Nina Hollander . The young people that make the base work are truly a blessing. When people bad mouth the youth of today they need to visit a base like MAFB and see how many wonderful young people we really have here.

Nina Hollander I wish our Military got more recognition. I just hate that we have so many Holiday sales that tend to get a lot more attention that Armistice Day or other days dedicated to our Veterans.

Patricia Feager ~ amen to that, Patricia... just like the Christmas and Thanksgiving Day sales encroaching on what should simply be family holidays.

Bob "RealMan" Timm ~ good morning, Bob... you won't get any argument from me on this issue... the problem is that more Americans live far away from our bases and military than those who live close by and can see for themselves how wonderful these young soldiers are.

I wouldn't argue with you on any issue Nina Hollander  my love, why would I want to take up the wrong side?

I kept seeing flags flying at half staff and then realized late in the day it was Armed Forces Day. I knew it was something special.

Debbie Reynolds ~ hi Debbie... it really is a shame that Armed Forces Day flies below the radar for so many.

Nina, I missed this one, but always thank those serving for us in any branch of our armed forces.

Joan Cox ~ hi Joan... shame that this holiday falls so much under the public's radar.

Paul S. Henderson, REALTOR®,CRS, ~ hi Paul... I think lots of communities have issues with flag poles... fortunately, I live in one that encourages those attached to the front porches and encourages people flying their flags, in general, and especially on days like this.