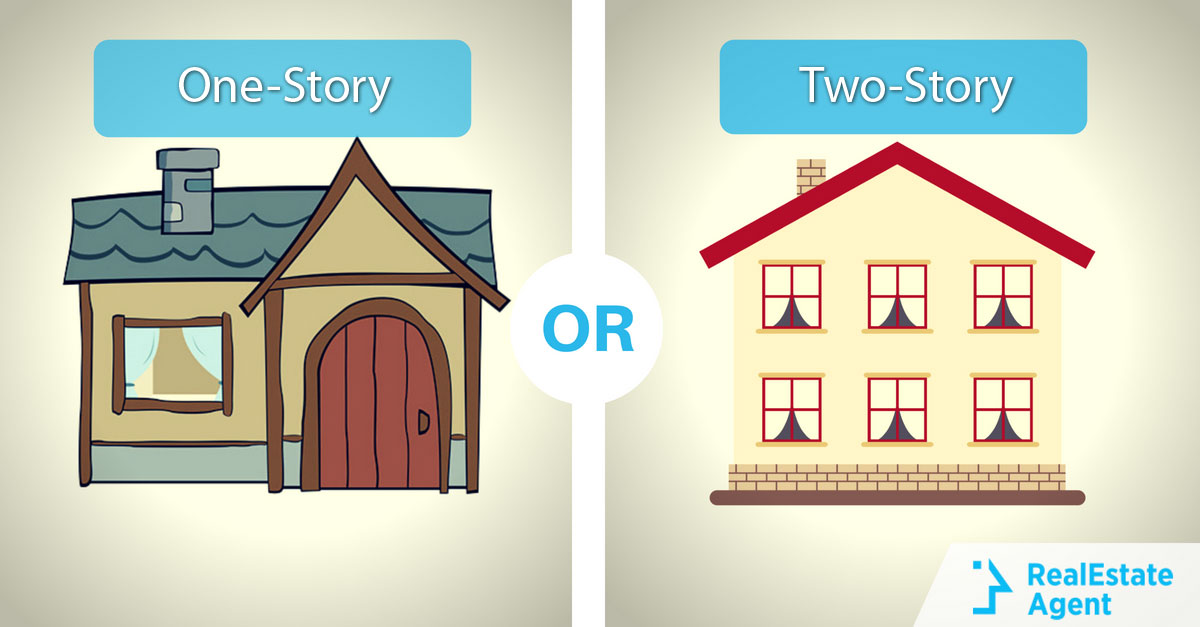 This could easily be an excerpt from a bad Dr. Seuss real estate poem, but it’s a fair question we aim to discuss in this post: what are the main difference between a one-story house and a two-story house? What are the reasons that one person would choose to build one over the other?

We don’t intend on telling which is better, because we truly think there’s no such thing. It’s just a matter of preference; some will be better served by a one-story house and others by a two-story house. It’s important to establish that a house’s market value is assigned by a lot of factors and the square footage of a house beats the number of floors; meaning if you have a two-story house with 1,200 square feet (including both floors) and a one-story house with 1,300 square feet, it’s likely that the latter will have a higher price than the former – likely because, as we said, there’s still a lot of other factors to determine this; neighborhood, materials, conditions of the home etc.

Having put that out of our way, one important thing to differentiate when deciding between the two is that the single-story house design is less physically demanding than a two-story house design. Walking those stairs up and down is great exercise, but it might be too much for people that are not that young anymore. It might be too much for their knees and hips. Actually, it can be problematic for all ages and for several different reasons. Naughty kids or the ones who are just learning to walk, can wander around and trip and hurt themselves on the stairs. And God forbid something happens to a guest, not only for their safety but for the suing possibility. If you choose to get a house with more than one floor, you better read the fine prints of your Liability insurance coverage, just to make sure you are well covered, because accidents on the stairs are common and extremely dangerous. You can always add a stair lift to your two-story house design so grandpa (and the lazy) can move around safely. On our book, whatever renovation that prevents you from activating your liability insurance is considered one of those home upgrades that pay off! But it’s not only a safety issue that comes into play here. Aside from taking some space where you could build something else, the stairs of a two-story house produce a nuisance with laundry, for instance, because most washing machines are in the garage or somewhere else on the first floor, so maybe you have to go up and down during the process. If your idea is staying forever at the home, the single-story house design is easier to manage. Hey, you can even maximize it and put the master bedroom close to the kitchen and bathroom so you almost don’t have to move!

However, let’s talk a bit about some benefits of homes with two floors in comparison to a one-story house.

You know one of the biggest headaches in a house is the roofing, right? Not only because it’s one of the most expensive parts of the building process, but also because it’s one of the main things that makes homeowners in America activate their homeowner’s insurance policy.  Well, when both of them have the same square footage, a one-story house will have much more roof to cover, making it not only more expensive to build, but to maintain. And what if you like having a big spacious garden? You can have it without sacrificing the size of your house. Just build the second floor and instantly get a space for a barbeque grill, a pool or whatever else you want ... even She Sheds!

Having the second floor also means you can have a more private bedroom, with less noise from the street and, depending on where your house is located, a better and clearer view to complement your house features.

Now, beware that the two-story house design does require more of a demand on your air conditioning system, as the air needs to travel its way up to the second floor and that, in the end, means more electricity used, means higher expenses on your end. Plus, in America there are many houses that have their second-floor build of wood rather than concrete, which makes it for an easy prey to hurricanes. If the house is in a hurricane-prone region, you should take that into consideration.

Argh! This is a difficult one, right?

Well, if after all we’ve exposed you’re still on the fence because you could see the good and the bad of each option and, in your case, to your needs, they did cancel one another… let us be pragmatic and talk about money. If your two-story house design is nothing exceptional, then it will be less expensive to build it than a one-story house. That’s due to the costs of roofing and especially the cost of the foundation, which will be significantly smaller. Will it take longer to build? Yes. You can’t make the second floor before you completely finish the first one, right? But, hey… you’ll be spending less. And more than that: from what our team at RealEstateAgent.com researched with some of the agents registered at The OFFICIAL Real Estate Agent Directory® the general perception from home buyers nationwide is that the two-story house design has more value than a single-story house design. They say this bias is related to the classic image of the American family, as seen in The Waltons, where that window overhead where mom and dad sleep, leads the "good night" session from top to bottom. This is just a perception and perceptions change - because of Agequake, this one will most definitely change and it won’t take long – but it is what it is, at least for now: if money is your main concern in the near future; a two-story house will probably give you a better return on your investment.

Hello Theresa, I prefer a 1 story home for many reasons but do believe 2 story homes create more square living space.

I wrote a new post about reaching out to ActiveRain members that are following me at the AR network, your name showed up #123 on my list ;o)

Hey, thanks for the comment, Bob! I live in a one-story too, but I have to confess that writing this one I caught myself thinking once or twice " Hmmm, two-story houses are nice"