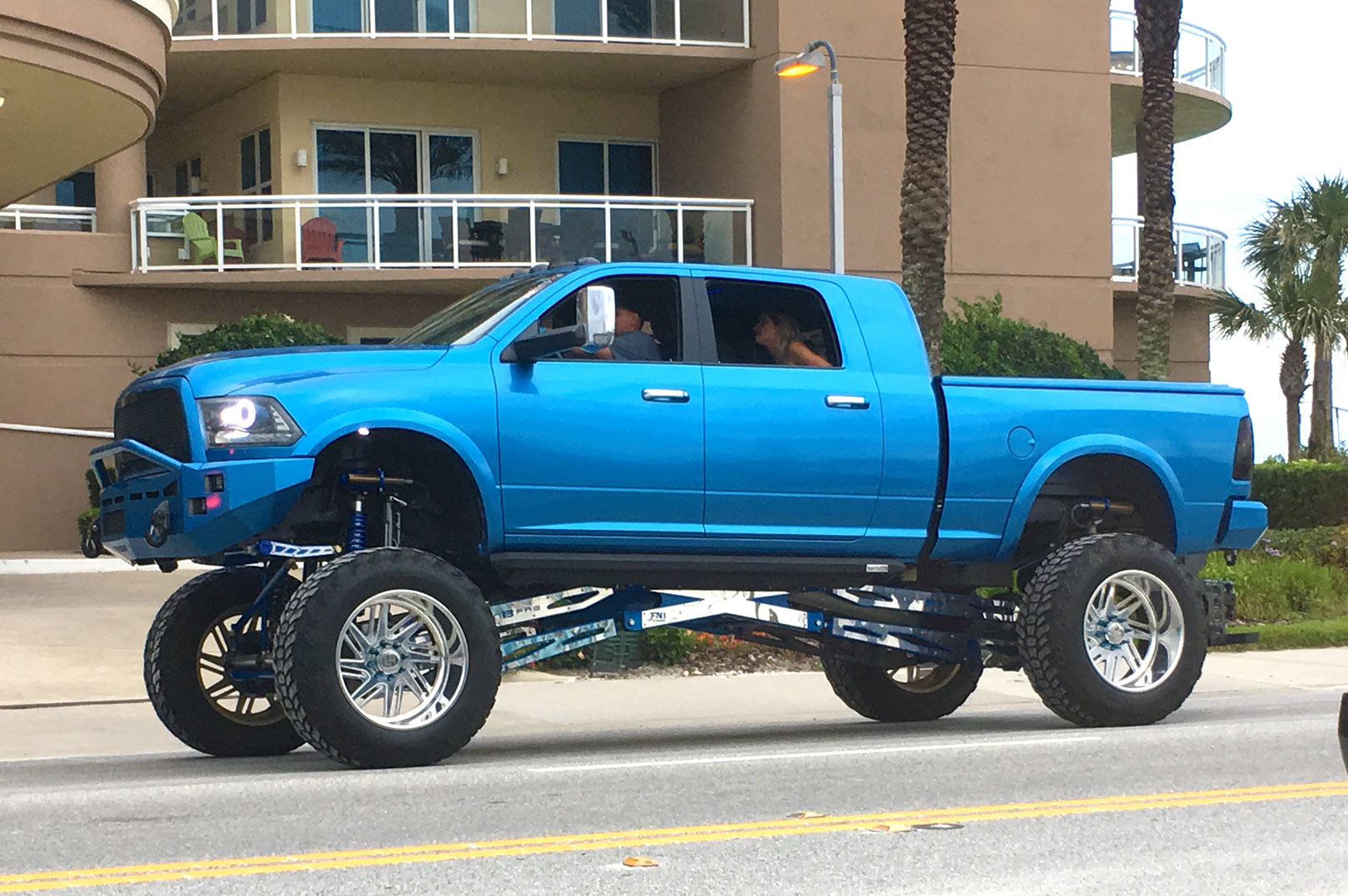 The weekend was marked by the Truck event. First event took place in 2014. Last year people were outraged and there were a lot of complaints, so everybody was saying that there would be no more truck events.

Well, they were wrong.

What's the problem with the trucks (and about 15,000 guests) in town? Daytona knows much bigger events, and locals are mostly fine with that. There is a keen understanding that events are bread and butter of local economy. Even the Jeep event with more jeeps in town does not cause bad feeling, but these monstrous trucks do.

The weekend turned difficult for the beachside. Traffic was unusually heavy. And on a narrow barrier island, there is not easy to circumvent the traffic.

The problem was not only the trucks, it was compounded by proms at the Ocean Center. There were 3 proms on Saturday, bringing thousands of cars to the Beachside causing delays and delays and delays...

Locals, who are usually quite tolerant of the events, are not accepting this event as others.

Go figure, but after staying in traffic and being late for the open house, I sort of understand them... Groups:
Addicted to Active Rain
All Things Florida
Diary of a Realtor
Travelers In The Rain

Jon Zolsky, Daytona Beach, FL  Takes all kinds to make a world - some people like to be high up in a penthouse some in a truck -Go figure

Jon, What makes it different to other events that are more accepted?  Is it noiser?  More exhaust from diesels?  Or just too "rednecky" for the locals?  Or something else I'm missing? Bill

We have events in town, we know the importance of tourism and we don't mind ceding the town on weekends.  A

Hi Jon- I suppose some people feel the need to complain about something. Was it because they were trucks?

when you live in a "destination" city you can expect that sort of thing.  I'm certainly glad I live in the middle of no where and not much happens here.

Hannah Williams - and these are expensive toys. We are talking about upgrades in tens of thousand

Liz and Bill Spear - that surprises me. I thought we take everything, but seems it is not true. I think it is because of the size and menacing manner of the drivers. It is "Get off the road" feel that people get. It is revving up the engines. I think this is the reason. Jeeps, though in much bigger numbers, are not intimidating.

Ron and Alexandra Seigel - seems I am more tolerant than some others. I did not particularly enjoy the truck event, but not to the point of non-acceptance.

Kathy Streib - oh, we have people unhappy with anything, and you, probably, too. Trucks seem to be causing more rejection than other events. Maybe because of their size and aggressive way of driving.

Tammy Lankford, - I do not mind living in a destination place. It is just that some events are less OK than others and I am trying to see why

Jon, Daytona seems to be the event capital of all the Florida coastal towns. We get some in Destin but not nearly as much as you do in Daytona.

Mike Frazier - I think Daytona slowly but surely is losing it. Events grow bigger and then they start spreading. Bike Week is the best example. It is now spread to other neighboring cities and even to Orlando. And it seems to become smaller in Daytona.

Daytona is a funny place. They like events because this is money for the local economy and they do not like them because it is some disturbance to locals and law enforcement. Two different approaches sort of clash

I think it is intimidation - and they're larger than the jeeps or motorcycles that Daytona is known for, Jon. You can't see past them on the street and even if the drivers aren't 'bullies,' the size of their vehicles make you feel otherwise!

Debe Maxwell, CRS - I believe you are exactly right& They are way more intimidating that bikes, and jeeps. People do not like when there are too many of them on the road. I guess nothing would change it.