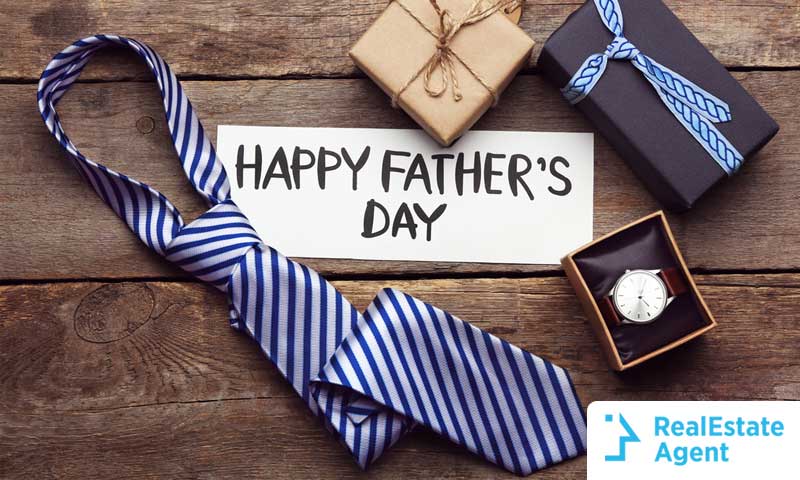 With Father’s Day approaching our team at RealEstateAgent.com decided it would be nice to cherish this date with a post to give sons and daughters (and moms, if the children don’t have the age to buy it themselves) father’s day gift ideas. So, full disclosure: this post is going to be written from the point of view of them.

Ok, so… fathers day presents us with an opportunity to give fathers gifts that they can enjoy with us, right? A father can’t be a father without a son/daughter. So, how about a wallet? Hold on: a super nice fancy wallet. So fancy he has to always have a lot of money in it otherwise it’s a waste of a wallet and, then, he will not have an excuse when we say we need money for _____, because he has nothing in his wallet. PS: we take credit cards too, dad!

But seriously: how about a nice activity you can share with your dad? What does he really like? Watch a baseball game to curse the umpire? Go to the movies to loudly ask (with popcorn in his mouth) “Isn’t that ____ from that ____ tv show?”? Go to a concert of his favorite really old rock band to tell you about how he could’ve been on that stage had he continued with his band? Well, do that with him and join in his pastime/embarrassment/lament. Fathers love when their kids “get it” and, you know what; it can be pretty damn fun. If you can’t be there for Father’s day because you’re grown up, living by yourself someplace else, why not give a trip for your father and the missus? Yeah, like a romantic getaway or a cruise! Do your research on the Best Vacation Destinations this Summer and give your dad a really happy father’s day. And if your dad is a big practical joke enthusiast (like mine) you should buy just a one-way ticket for him and when he calls to say he’s missing the ticket back, you could say “well, dad, I’m a firm believer in teaching a man to fish, so I taught you to go and now I hope you have the means to figure a way to come back”. Put on mute to laugh your socks off as he fumes and after 3 minutes wish him Happy Father’s Day and tell him it was a joke. Just make sure you actually buy a roundtrip ticket! The prankster version for spouses is to present him with a fake positive pregnancy test. It’s especially funny if you guys have already a lot of kids. Just watch out if Dad has a heart condition history; then it’s better not doing this one…

Another of our Father’s Day gift ideas is for those parents that could easily double as handymen. You know the type. The ones who, whenever there was something broken in the house, would go there and fix it. Literally but also metaphorically. Why not get him the most modern tool/gadget for him to update his workshop? Just don’t get sad if he never uses it - can’t blame them for being loyal to their tools; some are even older than you! A cheap father’s day gift version of this is printing a cool picture of you and him and DIY a picture frame or canvas to show him that you too have chops. He’ll be proud and maybe even display it at his workshop! Spouses can give for Father’s Day a lawn mower to hint he should use his prowess outside because that grass is so high and thick. By all means, this is in no way me implying to my husband - who’ll probably read this - that I was right on the whole Natural Grass Vs. Artificial Grass debate and we should have gotten artificial grass because it was a no-brainer that he would never cut the damn natural grass!

Note: for this type of dad, we are unsure if giving Smart Home Devices is a bad idea or the greatest. He can either hate it because he’s old school, likes to do things manually and will be like “Damn, you Alexa! Why do you do it all wrong?”, throwing it against the wall OR he might love it and even try to enhance it, opening it up to dissect it, giving him hours and hours of entertainment in the process. You could also bargain with mom to get one of those cool drones. Tell her it’s for Dad and yourself to spend some quality time together. She’ll think it’s sweet and go forward with it and you two will be able to play around flying; just keep the blinds closed so he won’t spy on you and complain you are fooling around instead of doing your homework.

Dad’s a businessman? One of the most simple, elegant father’s day gift ideas is to present him with a new tie or a new briefcase. And the cheap fathers day gift idea version: make a new – more trendy -  batch of business cards for him. He’ll sure appreciate your marketing savvy and care towards him.

Also, unfortunately, that kind of Dad sooner or later gets too stressed regarding his uncertain, high-stakes job, so slowing down as soon as possible is a must. Why don’t you do that and find things to contribute? Maybe get him a fish tank. It’s not difficult to manage and it can be a great relaxing way to take his mind off work for a while. For the spouses that are thinking “Oh, he thinks his life is stressful?!”; why not give him cooking lessons so he can see what we go through every night doing overtime after work!

All jokes aside, Father’s day is all about spending time together and honoring those who are there for us when we need the most. Those who sometimes need to do the dirty job of being the bad guy so you do good in the future. Who was our first hero and forever will be the person who calms our heart when he shows confidence that everything will be alright. Happy Father’s Day to everyone!

These are some awesome Father's day gifts and pranks. Thanks for sharing I hope you have a great week ahead.

Thanks, Pat! Have a great week yourself!